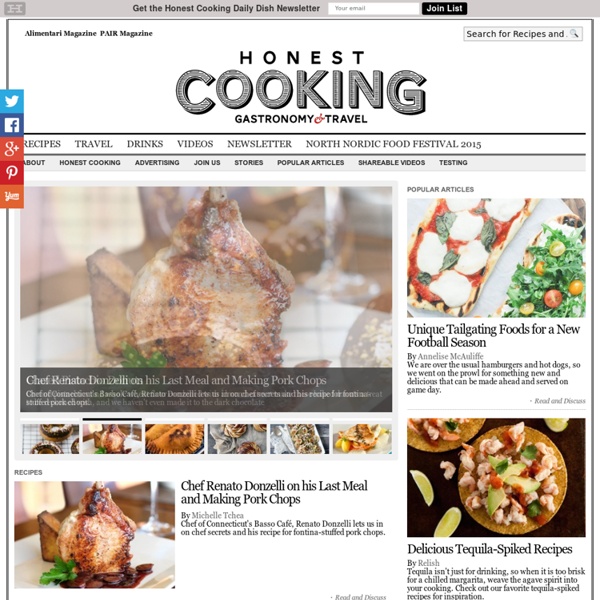 Recipe Index Cranberry Sauce Cranberry Compote Ideas Kale Salad With Figs and Feta Melon Salad with Chili and Lime Whole Roasted Sriracha Chicken Grilled Halibut with Spicy Yogurt Raita (A recipe from David Tanis, A Platter of Figs) Columns - Food52 Sometimes it's healthy to relinquish control, but not when it comes to the temperature of your eggs. Here's a way to bring eggs to the exact room temperature, no guesswork involved. Read More » We know the smells coming from the Indian restaurant are really, really, really good, but don't succumb to ordering takeout for the third night in a row.

The 2013 Best Food Blog Awards: The Winners! 's ongoing mission to chronicle a world of authentic cuisine, we find what we're looking for more and more in one place: online. Of the tens of thousands of nominations that came in this year—blogs great and small, visual and textual, humorous and profound, technical and amateur, exuberant and austere—we found not just great writing, great photography, and a great commitment to the importance of food to storytelling and community-building, but also some blogs that truly spoke to us. We're thrilled to shine a light on the sixty-eight unique blogs that are finalists in the fourth annual Best Food Blog Awards—and even more delighted to announce the winners in each category. Congratulations to all! Credit: Good Beer Hunting Credit: Green Kitchen Stories

Piccadilly Carrot Souffle Recipe This is an amazingly easy recipe to follow and very delicious. None of my family was able to guess that it was carrots. I made this for our Christmas Dinner last year and everyone loved it, including the children. They all thought it was sweet potatoes or yams. Now, this recipe is a copykat of Piccadilly Cafeteria's recipe. If you wanted to switch up and put less sugar I am sure that you could, but again we indulged for the holiday and make it just as the recipe stated. My Chez Panisse Experience : Cafe Fernando – Food Blog - berkeley - chez panisse - san francisco - Restaurants June 23rd, 2011 | Category: Restaurants, Travel Two years before opening Chez Panisse, Alice Waters, together with her friend from the Montessori Centre, started a journey from London and ended up in a remote village in Turkey. In the middle of nowhere, they ran out of gas and asked for help from a big-eyed boy. The boy mimed there wasn’t any gas left to pump and when they asked for food, this time he led them to his house. He built a fire out of pine cones, put on a teapot and came back with a tiny piece of cheese, which he then cut into microscopic portions before serving them. Alice, realizing that the big-eyed boy has given them everything he has without expecting anything in return, was deeply moved.

Best Food Blog Awards 2014: Winners Each year we've hosted the Best Food Blog Awards, we're astounded at the depth, variety, creativity, and ingenuity of the food blogs nominated, and this year was no exception. They've inspired us to pull out our cameras, travel to experience new foodways, and most importantly, inspired us to get in our kitchens and cook. Congratulations to this year's winners, and a big thank you to everyone who nominated and voted for them!

Good Morning Sunshine Bars I have some really exciting news, folks. Set your TiVos to “awesome”, because I am going be on Anderson Cooper Live on Thursday, February 28th! Three competitors were chosen to face off in Anderson’s Chocolate Chip Cookie Challenge, where I will be force feeding Mr. Cooper cookie after cookie. It’ll be just like that episode of The Simpsons where Homer goes to hell for eating the Forbidden Doughnut, and they hook him up to that machine that feeds him a million doughnuts and he still asks for more. I hope that you will all watch as I embarrass myself on national television.

2011 » Pete Drinks One of my big beer obsessions is exploring the ever growing London brewing scene; the London Brewers page I maintain here isn’t so much a public service as a ‘to drink’ list. Here, we pay our first visit to a brewpub – specifically, the Bull in Highgate which has the added benefit of being the brewery geographically closest to my house! The Bull has been there for a very long time, but it’s only a matter of months since Dan Fox took the place over, refurbished it into a stylish space and somehow managed to cram a small, 2.5 barrel brewery – the London Brewing Company – into the corner of the kitchen. Ok, so it’s not going to put Fullers out of business any time soon but despite the size they aim to keep four of their own brews on tap at any one time. They also manage to sell one of the more impressive collection of craft beer from around the world – draft and bottled – that I’ve come across in a pub.

Avocado Pasta Recipe Avocado pasta has been floating around the internet forever but even though I have a major obsession with avocados, I was never compelled to give it a go. I just couldn’t really imagine warm avocado sauce. It’s not that I had a problem with warm avocados – I’ve had avocado fries (deep-fried tempura avocado) and they’re delicious! As was this pasta, when I finally decided to give it a try. The best thing about this recipe is that it comes together as fast as instant mac and cheese: you just have to boil your pasta, blend your sauce and you’re good to go. I went with bowties because bowties are the cutest pasta shape out there. Homemade Peanut Butter Once you make peanut butter at home, it will be very difficult to get excited about storebought peanut butter ever again. Not that eating peanut butter of any kind would ever be a chore because I love it so, but homemade peanut butter is a delicacy. And a nearly effortless delicacy at that. It’s akin to savoring a piece of high-end dark chocolate that’s rich and pure, uncomplicated by fillers, additives, or ingredients that have no place being in chocolate; and then grabbing a milk chocolate bar in the checkout line at the grocery store, which is likely a combination of tasteless, grainy, and waxy.

How to Make Easy 3-Ingredient Energy Bars at Home Cooking Lessons from The Kitchn Power bars! Make them at home with only three ingredients and a food processor. Prepare for your mind to be blown. Ready? Homemade energy bars. Three ingredients. Baba au rhum I can't actually remember the first time my mom made Baba au rhum. But somewhere in my teenage years, it became a yearly tradition and she wowed family and friends (and got them tipsy too!) with this recipe. The BEST Balsamic Vinaigrette There are very few recipes here that I use the word perfect to describe. This dressing is truly worthy of the word perfect. I've tried numerous balsamic vinaigrette recipes over the past year and while they have been decent, they were not quite what I was searching for. I am thrilled to be sharing this recipe with you today. I served it last week to visiting family and those who tried it immediately requested the recipe.