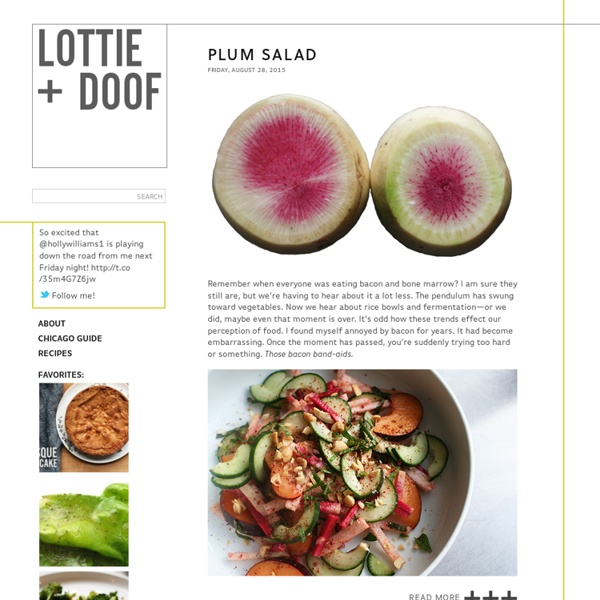 Recently there has been some discussion about pastry chefs and their importance in restaurant kitchens. You know by now that I consider dessert to be the most important part of any meal, and I stand in solidarity with pastry chefs and their kin. I want to spend some time this year highlighting my favorite pastry makers and bakers in Chicago, because they are amazing and have a lot to teach home bakers. I’m always shocked when people don’t order dessert—are they ill? is this a sign of mental illness? do they not understand what dessert is?

How to: Strawberries You may have seen these in the produce section of the grocery store and thought “NO WAY”! Well guess what? They’re delicious! Foodbuzz 24X24: Red Egg and Ginger Party My husband, mother-in-law, and I threw our firstborn a traditional Chinese red egg and ginger birthday party when he turned one this past week. I am sure you are wondering, "What is a red egg and ginger party?" Red egg and ginger parties are typically celebrated at the one month mark of a young child's life. During the ancient times, when infant mortality rates were high, if a child survived to the one month mark, it was a sign of great fortune and an event worthy of a big family get-together. The one month milestone in a child's life is a significant occasion for all families, and this milestone is marked by a huge celebration in Chinese culture, where family and friends plan a banquet and meet the new baby.

Harshing our melow since 2005 Kuma’s started in 2005 with its flagship location at the corner of Belmont and Francisco avenues in Chicago’s Avondale neighborhood. From our origins as a corner bar with solid American bistro fare, we’ve grown to two locations that offer the finest burgers available on this planet or any other. Our ethos is simple. Double Dipped Apple Doughnuts Given the choice between being home and not being home… I’m the girl that always chooses home. Brooklyn is amazing. San Francisco is delicious. Baltimore is bonkers. Home is my heart.

2011 » Pete Drinks One of my big beer obsessions is exploring the ever growing London brewing scene; the London Brewers page I maintain here isn’t so much a public service as a ‘to drink’ list. Here, we pay our first visit to a brewpub – specifically, the Bull in Highgate which has the added benefit of being the brewery geographically closest to my house! The Bull has been there for a very long time, but it’s only a matter of months since Dan Fox took the place over, refurbished it into a stylish space and somehow managed to cram a small, 2.5 barrel brewery – the London Brewing Company – into the corner of the kitchen.

Chinese New Year Cookies: Green Pea Cookies Green Pea cookies was a big hit few years back during Chinese New Year but I was never at the right place to taste it. I never caught on the green pea fever (if you know what I mean). Ahh but never fear, there’s always first time for everything. :) Alien balls! Hahaha Left: Green Peas + Flour Right: After combining oil, salt and icing sugar, add green peas and flour. Restaurant Reviews Between Boutique Cafe & Lounge 1324 N. Milwaukee | 773-292-0585 Baba au rhum I can't actually remember the first time my mom made Baba au rhum. But somewhere in my teenage years, it became a yearly tradition and she wowed family and friends (and got them tipsy too!) with this recipe. A Baba - you may be wondering - is a yeasted brioche bun that is soaked in rum syrup. My mom would make this dessert only once a year at Christmas, so it was a cherished and much-anticipated holiday treat.

Istanbul Eats May 13 Friday Filed under Recipes In a short time, Karaköy’s Lokanta Maya has become one of the most sought-after tables in town. More than any other restaurant we’ve tried in Istanbul, Maya does contemporary Turkish effortlessly, without skimping on that traditional Turkish flavor. A mainstay on the menu, and reason enough to come here for a meal, is chef Didem Şenol’s mücver, or zucchini fritters. Asian American History, Demographics, & Issues Asians have been in the U.S. for a long time. The history of Asians in the U.S. is the history of dreams, hard work, prejudice, discrimination, persistence, and triumph. As presented in the excellent PBS documentary series Ancestors in the Americas, the first Asians to come to the western hemisphere were Chinese Filipinos who settled in Mexico.

The 50 Best Sandwiches in Chicago - Chicago magazine - November 2012 For generations, sandwiches were the ultimate guilty pleasure of subcultures that had no patience for guilt: hungry bachelors, school kids, working stiffs, old men in delis. To fridge-foraging rubes like Dagwood, quality wasn’t half as important as quantity. The sandwich was one of the only snacks you were allowed to pile as high as you wanted with anything you desired and cram into your face with both hands—a meal so inelegant and blithely proud of its inelegance that it came in six-foot segments for parties. And we ate it. Standing up.

Back to the regular swing of things :) Monday, October 31st, 2011 Pearl barley and puy lentil salad with roasted heirloom baby tomatoes, chorizo and baby radish 1 cup pear barley1 cup puy (or French) lentilsLarge handful heirloom baby tomatoesHandful green beansHandful baby radish, thinly sliced2 medium-sized whole chorizo sausageJuice 2 lemonsOlive oil & EVOOSalt & freshly ground black pepper1 tablespoon poppy seedsExtra lemon wedges to serveBaby basil leaves Pre-heat oven to 140˚C (280˚F)Slice baby tomatoes in half, drizzle with a little olive oil and slow roast in the oven for 1.5 hours until caramelised. Buttermilk Pancakes Recipe My quest for a fabulous pancake recipe has followed a very similar path as my quest for the perfect chocolate chip cookie. Until I found “the one“, I searched high and low. Every recipe claiming to be the best I tried. And I kept trying until that fateful day when it was clear that I never had to try another chocolate chip recipe again. And so it has been for pancakes.