Mooresville School District, a Laptop Success Story. There, a boy peering into his school-issued MacBook blitzed through fractions by himself, determined to reach sixth-grade work by winter. Three desks away, a girl was struggling with basic multiplication — only 29 percent right, her screen said — and Ms. Holsinger knelt beside her to assist. Curiosity was fed and embarrassment avoided, as teacher connected with student through emotion far more than Wi-Fi. “This is not about the technology,” Mark Edwards, superintendent of Mooresville Graded School District, would tell the visitors later over lunch.

“It’s not about the box. As debate continues over whether schools invest wisely in technology — and whether it measurably improves student achievement — Mooresville, a modest community about 20 miles north of Charlotte best known as home to several Nascar teams and drivers, has quietly emerged as the de facto national model of the digital school. Mr. The district’s graduation rate was 91 percent in 2011, up from 80 percent in 2008. “So,” Ms. Common Sense Media Education. February 27, 2014 We are thrilled to announce the release of our entire Digital Literacy and Citizenship Curriculum as a set of eight interactive, multimedia iBooks Textbooks, available for free in the iBooks Store... read more March 31, 2014 Imagine … a school district that is teaching Digital Literacy and Citizenship lessons to 28,000 K-12 students, with 1,800 trained teachers. 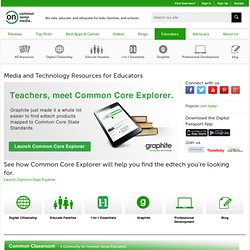 Is it possible? Last week, I hosted an inspiring webinar... read more Categories: 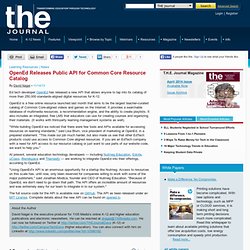 OpenEd is a free online resource launched last month that aims to be the largest teacher-curated catalog of Common Core-aligned videos and games on the Internet. It provides a searchable database of multimedia resources, a recommendation engine, and the ability to create playlists. It also includes an integrated, free LMS that educators can use for creating courses and organizing their materials. "While building OpenEd we noticed that there were few tools and APIs available for accessing resources on learning standards," said Lisa Blum, vice president of marketing at OpenEd, in a prepared statement.

"Using OpenEd's API is an enormous opportunity for a startup like Nutmeg. The full source code for the API is available now on GitHub. Education Week. Published Online: February 8, 2012 Published in Print: February 8, 2012, as A Thirst for Research Features Experts say virtual education is largely understudied, and that is a significant problem given the increasing popularity of this form of education A flurry of reports and high-profile news articles over the past year has cast doubt on the effectiveness of online education, and raised concerns about the rapid growth of virtual education across the country. 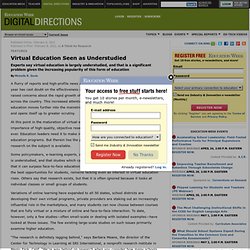 This increased attention comes as such education moves further into the mainstream of K-12 education and opens itself up to greater scrutiny. At this point in the maturation of virtual education, the importance of high-quality, objective research is greater than ever. "The research is definitely lagging behind," says Barbara Means, the director of the Center for Technology in Learning at SRI International, a nonprofit research institute in Menlo Park, Calif. 'Does It Work? ' ... Is technology and the internet reducing pupils' attention spans? A growing number of books, including The Shallows, argue that the internet and digital gadgets are making it harder for us to concentrate. 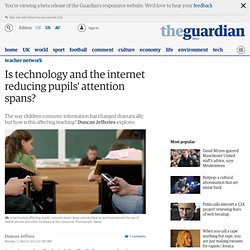 The Pew Research Centre in America recently surveyed almost 2,500 teachers and found that 77% thought that the internet had a "mostly positive" impact on students' research work, while 87% felt modern technologies were creating an "easily distracted generation with short attention spans". But could this simply be the latest variation of 'the Elvis Hypothesis' – because something is new, popular with young people, and challenges existing hierarchies and traditions, it must be bad? Although some UK teachers might be inclined to agree with their American counterparts when faced with a class of restless smartphone-enabled year 10s, there appears to be no conclusive evidence that pupil attention spans are declining. Sue Honoré, an independent learning consultant who co-authored the 2009 report 'Generation Y: Inside Out' with Dr.