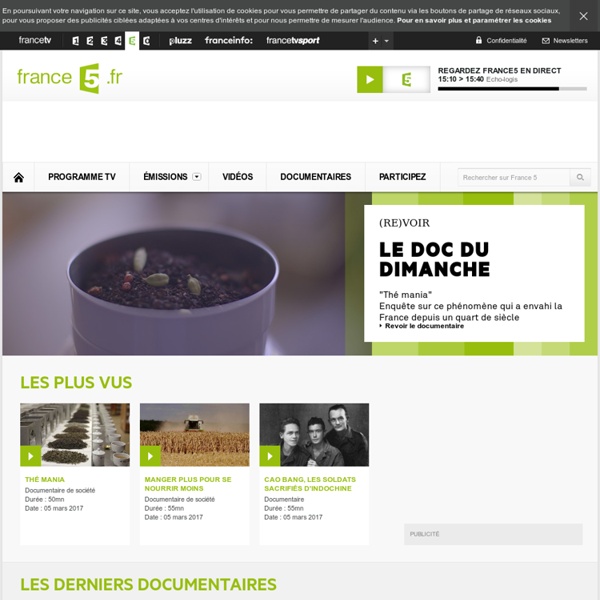 Global surveillance industry gets a new toy Looking at the state you’re in. Palantir’s surveillance technology is wide-reaching. When the government told the people of London that the eyes of the world would be on it during the Olympic Games, it failed to mention one particularly powerful watcher; a new software programme used for tracking potential troublemakers. In the September edition of Wired Magazine, Shane Harris reports on the new American software company Palantir Technologies, new over here in the UK just in time for the Olympics. A life like mine présenté par Collectif Argos The project « A LIFE LIKE MINE » is a multimedia dive into the heart of an ancestral activity, indicative of society’s development : the search for gold. Gold fascinates. For some it is a barbarian relic of the past, for others a source of development.

The new totalitarianism of surveillance technology A software engineer in my Facebook community wrote recently about his outrage that when he visited Disneyland, and went on a ride, the theme park offered him the photo of himself and his girlfriend to buy – with his credit card information already linked to it. He noted that he had never entered his name or information into anything at the theme park, or indicated that he wanted a photo, or alerted the humans at the ride to who he and his girlfriend were – so, he said, based on his professional experience, the system had to be using facial recognition technology. He had never signed an agreement allowing them to do so, and he declared that this use was illegal. He also claimed that Disney had recently shared data from facial-recognition technology with the United States military.

Honeypot reveals mass surveillance of BitTorrent downloaders Ever used BitTorrent to download a song? A book? How about a film or a TV show? It's highly likely that within 3 hours of doing so, the copyright enforcement people were on to you, monitoring your IP address, according to new research. Security researcher Tom Chothia and his colleagues at the University of Birmingham, UK, conducted a three-year study that revealed "massive monitoring" of BitTorrent download sites, such as the PirateBay, that's been going on for at least that long. For the study, researchers developed a fake pirate server: software that acted like a BitTorrent file-sharing client that logged all connections made to it.

Everyone who attended OWS with a cell phone had their identity logged, says security expert Please note that by playing this clip YouTube and Google will place a long term cookie on your computer. While we in the civil liberties community disagree strongly with private investigator Steven Rambam's admonition to "Get Over It," after listening to him describe electronic surveillance powers it's hard to disagree with the first part of the title of his talk: "Privacy Is Dead." (Part two of the talk is below.) "Where you work, what your salary is, your criminal history, all the lawsuits you've been involved in, real property...everything you've ever purchased, everywhere you've ever been...Your information is worth money. Your privacy today isn't being invaded by big brother -- it's being invaded by big marketer," he told an audience of hackers and privacy activists at HOPE 9 in New York during the summer of 2012.

Clean IT – surveillance of all communications By EDRi This article is also available in: Deutsch: [CleanIT – Pläne zur Überwachung des Internets im großen Stil | A leaked document from the CleanIT project shows just how far internal discussions in that initiative have drifted away from its publicly stated aims, as well as the most fundamental legal rules that underpin European democracy and the rule of law. The European Commission-funded CleanIT project claims that it wants to fight terrorism through voluntary self-regulatory measures that defends the rule of law. The initial meetings of the initiative, with their directionless and ill-informed discussions about doing “something” to solve unidentified online “terrorist” problems were mainly attended by filtering companies, who saw an interesting business opportunity. The proposals urge Internet companies to ban unwelcome activity through their terms of service, but advise that these “should not be very detailed”.

Science of Surveillance From every cell phone call to every credit card swipe, we leave an electronic trail. But at what price? Explorer takes viewers into the disturbing world of surveillance technology and scans the latest and future technologies used to even spy on the private lives of citizens. From London's CCTVs to infra-technology equipped helicopters that search the streets of New York City, the documentary shows the inner workings of these surveillance systems. In today's information-overloaded and fear-driven society, surveillance technology seems to be deployed almost everywhere - and a surveillance mind-set is just as ubiquitous.

Cops to Congress: We need logs of Americans' text messages AT&T, Verizon Wireless, Sprint, and other wireless providers would be required to record and store information about Americans' private text messages for at least two years, according to a proposal that police have submitted to the U.S. Congress. CNET has learned a constellation of law enforcement groups has asked the U.S. Senate to require that wireless companies retain that information, warning that the lack of a current federal requirement "can hinder law enforcement investigations." They want an SMS retention requirement to be "considered" during congressional discussions over updating a 1986 privacy law for the cloud computing era -- a move that could complicate debate over the measure and erode support for it among civil libertarians.

Digital Social Research Tools, Tension Indicators and Safer Communities « BSC Policing Network Digital Social Research Tools, Tension Indicators and Safer Communities: a demonstration of the Cardiff Online Social Media Observatory (COSMOS) (ESRC and JISC) Dr. Matthew Williams, Dr. William Housely, Mr. Adam Edwards, School of Social Sciences, Cardiff University. Internet Surveillance: a despot’s dream… Imagine you’ve just been appointed the head of the online secret police for an oppressive dictatorship. Your leader comes to you with a worried expression. The internet bothers him, he tells you. People get to say whatever they want, to talk to whoever they want, and it’s spreading dissent and destabilising the government. ‘It’s a disaster,’ he says.

FinSpy Software Used To Surveil Activists Around The World, Report Says FinSpy surveillance software, marketed worldwide to law enforcement agencies as a way to monitor criminals, is widely used by repressive governments to spy on human rights groups and dissidents, according to a report released Wednesday. The report by researchers at the Citizen Lab of the Munk School of Global Affairs at the University of Toronto found the software is "regularly sold to countries where dissenting political activity and speech is criminalized." FinSpy, named after a line of code in its software, is a surveillance tool that infects computers to capture screenshots, log keystrokes, record Skype conversations and activate cameras and microphones. Gamma Group, a British company, makes the software and markets it to law enforcement agencies as a lawful way to monitor criminals.