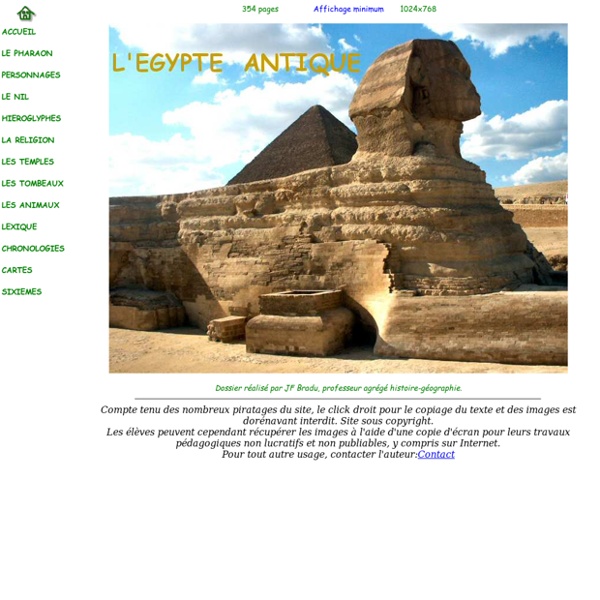 Reeder's Egypt Page This page is dedicated to examining some aspects of the art, archaeology, religion and history of Egypt. Comments and suggestions should be sent to : Greg Reeder (greg@egyptology.com) No current study of Egyptology would be complete without a copy of KMT: A MODERN JOURNAL OF ANCIENT EGYPT. Click on the KMT icon to discover the land of KEMET ( KMT ). THE TOMB of NIANKHKHNUM and KHNUMHOTEP in the necropolis of Saqqara, has intrigued some Egyptologists because of its problematic treatment of its two male occupants, manicurists to king Niuserre of the 5th dynasty. Explore this remarkable tomb by clicking on the icon.

World Art Treasures: Egypt Egypt The genesis of our spirit stretches from the first palettes carved in shale nearly five thousand years ago to the mural paintings with which the Copts covered the bas-reliefs of the temples of yore. Slide Library Tell El-Amarna, Capital of the Disk Roman Portraits from Egypt Pilgrimage to Abydos Articles on Ancient Egypt Resources on ancient Egypt, Egyptian pharaohs, hieroglyphs, pyramids, the Egyptian gods and goddesses, archaeology, art, egyptologists, sites for homeschoolers and children, and gossip. Ancient EgyptLearn the basics about ancient Egyptian history. This is the main hub for Egypt on this site. Ancient Egypt PicturesWords are one thing, as the hub page listed above will show, but for as colorful a place as Egypt, you need the visuals. Akhenaten's World nd the lands of Syria and Kush and Egypt, thou appointest every man to his place... All the distant foreign lands also, thou createst their life. This passage from Akhenaten's "Hymn to the Aten" expresses a universalistic sentiment nearly as revolutionary in Egyptian thought as Atenism itself.

Spiritweb / The Egypt Connection From The Book of THoTH (Leaves of Wisdom) Atenism (or the Amarna heresy) is the monotheistic religion associated above all with the eighteenth dynasty Pharaoh Amenhotep IV, better known under the name he later adopted, Akhenaten. In the 14th century BC it was Egypt's state religion for around 20 years, before a return to the traditional gods so comprehensive that the heretic Pharaohs associated with Atenism were erased from Egyptian records. Aten Atenist revolution Pharaoh Akhenaten and his family adoring the Aten Ancient History Encyclopedia Egypt is a country in North Africa, on the Mediterranean Sea, and is among the oldest civilizations on earth. The name 'Egypt' comes from the Greek Aegyptos which was the Greek pronunciation of the Egyptian name 'Hwt-Ka-Ptah' (which means "House of the Spirit of Ptah", who was a very early od of the Ancient Egyptians). In the early Old Kingdom, Egypt was simply known as 'Kemet' which means 'Black Land' so named for the rich, dark soil along the Nile River where the first settlements began.

Ancient Egypt - Ancient History Under Ahmose I, the first king of the 18th dynasty, Egypt was once again reunited. During the 18th dynasty, Egypt restored its control over Nubia and began military campaigns in Palestine, clashing with other powers in the area such as the Mitannians and the Hittites. The country went on to establish the world’s first great empire, stretching from Nubia to the Euphrates River in Asia.