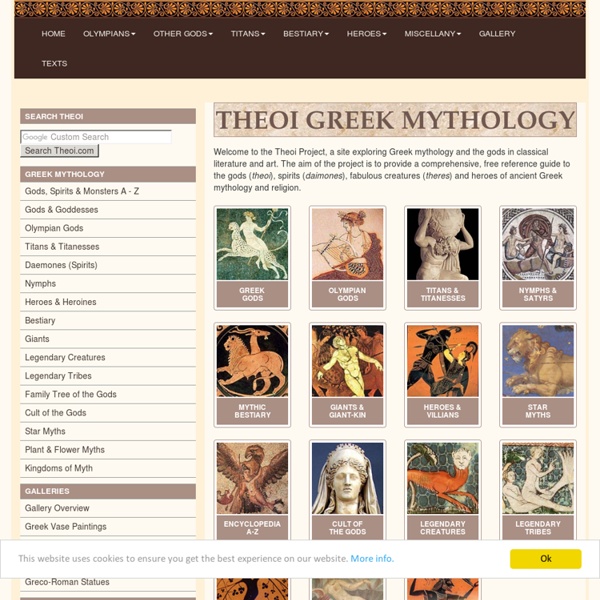 The Theoi Project profiles each deity and creature of Greek Mythology on a separate page, incorporating an encyclopedia summary, quotations from a wide selection of ancient Greek and Roman texts, and illustrations from ancient art. Analysis of the texts and interpretation of the stories of myth is currently beyond the scope of the project. For such detailed analysis, I would suggest consulting some of the good books available on the subject. Transliterated forms of Greek names are used throughout the biography pages of the site rather than their Latin forms, e.g. Kirke instead of Circe, Ouranos for Uranus, Apollon in place of Apollo, etc. The index and introduction pages, however, use the Latin name-forms for ease of reference.

Maecenas: Images of Ancient Greece and Rome 408,330 visitors before 21 March, 2002, visitors since then Images are copyrighted, but may be used for non-commercial purposes. Ancient Greek Science and Technology Somebody who only reads newspapers and at best books of contemporary authors looks to me like an extremely near-sighted person who scorns eyeglasses. He is completely dependent on the prejudices and fashions of his times, since he never gets to see or hear anything else. And what a person thinks on his own without being stimulated by the thoughts and experiences of other people is even in the best case rather paltry and monotonous. There are only a few enlightened people with a lucid mind and style and with good taste within a century. What has been preserved of their work belongs among the most precious possessions of mankind.

What Is A Modern Myth? I’ve had many discussions with people over the past few years about why myth is important. Much of these discussions come down to a misunderstanding about what the word “myth” means, so what could have been an interesting discussion about politics, permaculture, literature (or sex or food for that matter) becomes a lesson in semantics. I’d like to avoid rehashing that argument, and toward that end, give a definition of myth that all of us can wrap our heads around.

Heroes of History - The Heroic Monomyth As of July 1, 2013 ThinkQuest has been discontinued. We would like to thank everyone for being a part of the ThinkQuest global community: Students - For your limitless creativity and innovation, which inspires us all. Teachers - For your passion in guiding students on their quest. Partners - For your unwavering support and evangelism. Parents - For supporting the use of technology not only as an instrument of learning, but as a means of creating knowledge.

EyeWitness To The Middle Ages and Renaissance Life in a Christian Monastery, ca. 585"When he was dead his body was not placed with the bodies of the brethren, but a grave was dug in the dung pit, and his body was flung down into it. . . " Crime and punishment in a medieval monastery: the monastery's Abbott provides insight into the monastic life. The Vikings Discover America, ca. 1000"There was no want of salmon either in the river or in the lake." Five hundred years before Columbus, the Vikings discover a New World. Invasion of England, 1066The Norman conquest of Anglo-Saxon England described through the images of the 900 year-old Bayeux Tapestry.

Diotima: Women & Gender in the Ancient World Call for Collaborators to The On-line Companion to The Worlds of Roman Women The On-Line Companion to the Focus Reader, The Worlds of Roman Women, expands the book's wide representation of Latin texts by and about women dating from the earliest periods through the fourth century CE. The medium of a website, moreover, offers the opportunity to integrate visuals to texts, thus enabling users to make connections between language and material culture. How to Create a Timeline in Excel There are many ways to create a timeline in Excel. Some methods use drawing tools or bar charts, as in my other timeline examples. Another popular method, especially for project timelines, is to use a gantt chart.

Menrva Minerva Wisdom Goddess Arts Goddess Inventor Goddess Etruscan Goddess roman goddess pagan gods and goddesses Roman Gods and goddesses wiccan wicca paganism pagan Thalia Took Menrfa, or Menrva, is the Etruscan name of the Goddess of Wisdom and the Arts, who in Rome would be known as Minerva, and who corresponds to the Greek Athene. She is the Goddess of the mind, of crafts, artisans and trade guilds, and did not have a martial character until She was identified with Athene, who was brought to south-western Italy by Greek settlers. She was worshipped by workers and craftspeople, and was the patroness of the arts and learning, of engraving, weaving, painting, sculpture, dyeing, spinning, and teachers and students. Menrfa could be considered a Goddess of Healing as well.

Chronology The Turkic speaking Uighurs were one of many distinct cultural groups brought together by the trade of the Silk Route at Turfan in Chinese Central Asia. The Uighurs, primarily pastoral nomads, observed a number of religions including Manichaeism, Buddhism, and Nestorian Christianity. Many of the artefacts from this period were found in the 19 th century in this remote desert region of China.

Olaus Magnus’ Carta Marina: Sea monsters on a gorgeous Renaissance map The first time one looks at a color print of Olaus Magnus’ 1539 Carta Marina, the eyes scan the crowded landmass and fix on the creatures in the western part of the map. Larger than the other images and framed by open space, they dominate the chart visually and stir the imagination. To us, the quaint figures rising in the northern waters of Olaus’ map of Scandinavia could be illustrations in a children’s book. Herodotus Timemap Book 1, Ch. 1 This is the display of the inquiry of Herodotus of Halicarnassus, so that things done by man not be forgotten in time, and that great and marvelous deeds, some displayed by the Hellenes, some by the barbarians, not lose their glory, including among others what was the cause of their waging war on each other.The Persian learned men say that the Phoenicians were the cause of the dispute. These (they say) came to our seas from the sea which is called Red, and having settled in the country which they still occupy, at once began to make long voyages. Among other places to which they carried Egyptian and Assyrian merchandise, they came to Argos,which was at that time preeminent in every way among the people of what is now called Hellas.

Ancient Roman History Timeline Provides a chronological index of the history of Ancient Rome with extensive links to internet resources. Emphasis is placed upon the use of primary source material, numismatics, and a focus upon the roles of women in ancient time. scroll down for the timeline Thank you for visiting! 10 Lesser-Known Egyptian Gods That Are Absolutely Terrifying I was in Egypt a few weeks ago. Here's another relief from inside the temple at Esna, showing Thoth and Horus anointing the king, along with a goddess I believe to be Menhit. The interior of the temple is quite well preserved as it was deliberately buried to protect it. Here you can see the temple is significantly lower than the contemporary city. From this angle you can see the relief of Menhit pictured in the article.