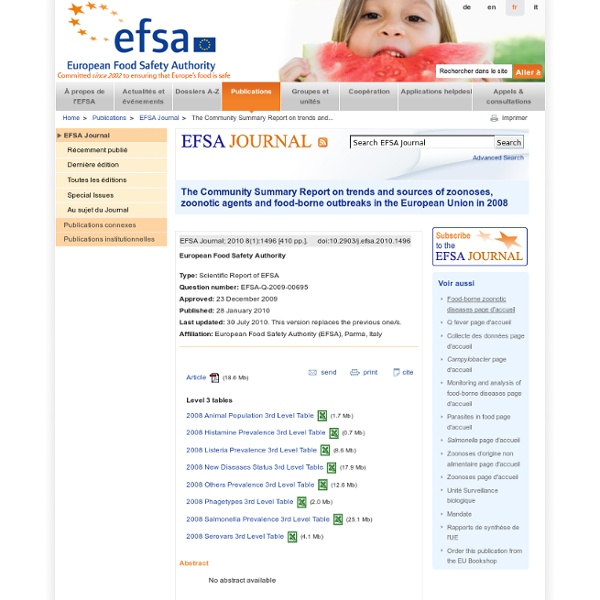 EFSA 04/06/09 Proposed technical specifications for a survey on Listeria monocytogenes in selected categories of ready-to-eat fo Type: Scientific Report of EFSA Question number: EFSA-Q-2008-415 Approved: 22 May 2009 Published: 04 June 2009 The European Food Safety Authority and its Task Force on Zoonoses Data Collection were requested by the European Commission to produce a proposal for technical specifications on a co-ordinated monitoring programme (a survey scheme) for Listeria monocytogenes in ready-to-eat (RTE) food. This survey should allow the comparison of L. monocytogenes contamination in RTE food in the Community and Member States and the verification of the Community food safety criteria for L. monocytogenes. The proposed technical specifications focus on sampling those categories of RTE food in which the highest rates of L. monocytogenes contamination have been observed in the European Union (EU): soft and semi-soft cheeses, smoked and gravad fish, and heat-treated meat products that are handled after heat treatment.

Animal Health & Welfare - Animal Diseases - Eradication and Monitoring Programmes - Legislation requires javascript 7 and 8 December 2006 in Helsinki, Finland - Finnish Food Safety Authority (Evira) The meeting was organised jointly by the Finnish presidency and the Commission. The main objective was to exchange information in order to strengthen the cooperation and collaboration among Member States, Acceding States and the Russian Federation regarding the eradication of rabies. Previous steps included a working group meeting on "Rabies co-operation", held during the Informal CVO meeting in Vienna on 16-19 May 2006. A technical meeting on "co-operation with Russia on Rabies eradication" was held in Paris on 24 May 2006, where there was a consensus on the need for EU/RU transboundary cooperation to eradicate rabies in the regions at risk. Descriptive epidemiology Rabies eradication in the EU: an overview (Francisco Javier Reviriego Gordejo, COM) Co-financing rabies eradication in the EU (new 90/424) Experience on transboundary cooperation Principles in rabies eradication Conclusions

EFSA 27/06/13 Analysis of the baseline survey on the prevalence of Listeria monocytogenes in certain ready-to-eat foods in the E EFSA Journal 2013;11(6):3241 [75 pp.]. doi:10.2903/j.efsa.2013.3241 Type: Scientific Report of EFSA On request from: European Commission Question number: EFSA-Q-2011-00137 Approved: 27 May 2013 Published: 27 June 2013 Affiliation: European Food Safety Authority (EFSA), Parma, Italy A European Union-wide baseline survey on Listeria monocytogenes was carried out in 2010 and 2011 with the aim of estimating the European Union level prevalence of Listeria monocytogenes in certain ready-to-eat foods at retail. © European Food Safety Authority, 2013 In the European Union (EU), listeriosis is a relatively rare but serious food-borne illness in humans, with high morbidity, hospitalisation and mortality in vulnerable populations. Sampling took place between January 2010 and January 2012. The EU prevalence of L. monocytogenes-contaminated fish samples at time of sampling was 10.4 % while at the end of shelf-life it was 10.3 %.

EUROSURVEILLANCE 02/05/13 Au sommaire:Re-emergence of animal rabies in northern Greece and subsequent human exposure, October 20 Greece has been rabies-free since 1987 with no human cases since 1970. During 2012 to 2013, rabies has re-emerged in wild and domestic animals in northern Greece. By end March 2013, rabies was diagnosed in 17 animals including 14 red foxes, two shepherd dogs and one cat; 104 subsequent human exposures required post-exposure prophylaxis according to the World Health Organization criteria. Human exposures occurred within 50 km radius of a confirmed rabies case in a wild or domestic animal, and most frequently stray dogs were involved. Introduction The last animal rabies case in Greece, dates back to 1987 while the last human case was reported in 1970 [1]. Rabid fox On 15 October 15 2012, a red fox (Vulpes vulpes) exhibited aggressive behavior during daytime, threatening inhabitants of a west Macedonian village in the area of Kozani. Rabid shepherd dog and exposure of humans and domestic animals Testing of brain samples from one exposed dog gave negative results. Figure. Table. Box.

EFSA 17/12/15 Campylobacter and Listeria infections still rising in the EU – say EFSA and ECDC Listeriosis infections reported in humans increased by 16% compared with 2013: there were 2,161 confirmed cases in 2014. Although this number is relatively low, the rise of reported listeriosis cases is of concern as the surveillance of these infections is focused on severe forms of the disease, with higher death rates than for other food-borne diseases, particularly among the elderly, and patients with a weak immune system. However, Listeria monocytogenes, the bacterium that causes listeriosis in humans and animals, seldom exceeded the legal safety limits in ready-to-eat foods – the most common foodborne source of human infections. Campylobacteriosis remains the most commonly reported foodborne disease in the EU and has been so since 2005. The number of confirmed cases in the EU in 2014 was 236,851, an increase of 22,067 cases (10%), compared with 2013. “All main actors in the food chain need to act together to improve monitoring at EU level.

VETERINARY RECORD 07/05/15 Cross-border transport of rescue dogs may spread rabies in Europe EFSA 12/08/14 Analysis of the baseline survey on the prevalence of Listeria monocytogenes in certain ready-to-eat foods in the EU, 2010-2011 Part B: analysis of factors related to prevalence and exploring compliance A European Union-wide baseline survey on Listeria monocytogenes was carried out in 2010 and 2011 with the aim of estimating the European Union-level prevalence of Listeria monocytogenes in certain ready-to-eat (RTE) foods at retail. A total of 3 053 batches of packaged (not frozen) hot or cold smoked or gravad fish, 3 530 packaged heat-treated meat products and 3 452 soft or semi-soft cheeses were sampled from 3 632 retail outlets in 26 European Union Member States (MS) and one country not belonging to the European Union. Two fish product samples from the same batch were analysed upon arrival at the laboratory as well as at the end of shelf-life, whereas the meat products and the cheese samples were analysed at the end of shelf-life. All 13 088 food samples were examined for the presence of L. monocytogenes, in addition to the determination of the L. monocytogenes counts. A statistical model was developed for this purpose and is presented in the current report.

EFSA 14/07/15 Update on oral vaccination of foxes and raccoon dogs against rabies EFSA Journal 2015;13(7):4164[70 pp.]. doi:10.2903/j.efsa.2015.4164 Type: Opinion of the Scientific Committee/Scientific Panel On request from: European Commission Question number: EFSA-Q-2014-00864 Adopted: 24 June 2015 Published: 14 July 2015 Affiliation: European Food Safety Authority (EFSA), Parma, Italy In 2002, the former Scientific Committee on Animal Health and Animal Welfare of the European Commission (EC) issued a scientific report on the oral vaccination of foxes against rabies, covering the type of vaccines and baits, the methods of release of vaccine baits, the density of baits and distribution patterns, and the seasonal pattern of releases. The recent European and international guidelines for rabies surveillance, as requested in the Terms of Reference have been used as a source of data and information for the current work. The conclusions and recommendations from the previous report issued by the EC in 2002 were comparatively assessed for their validity.