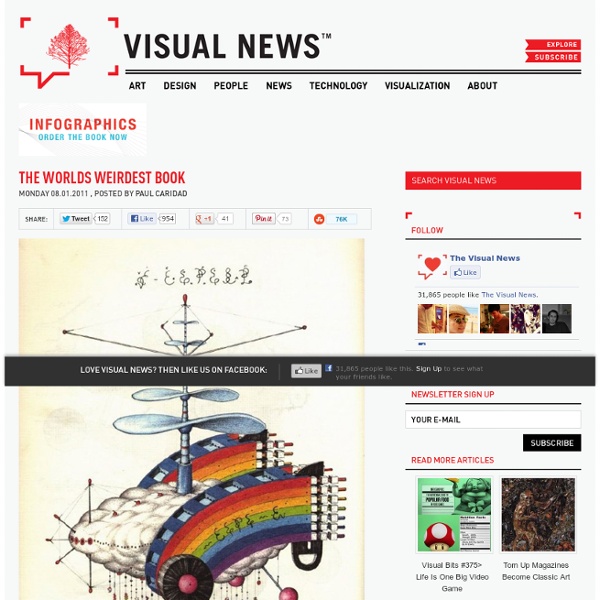 A truly unique work of fiction, ‘The Codex Seraphinianus‘ is a book that appears to be a visual encyclopedia of some unknown world or dimension. Written down in one of that worlds beautiful curving languages, the book by Italian artist, architect and industrial designer Luigi Serafini, explains the odd inhabitants and their colorful behaviors. The book was created between 1976 and 1978 and for the low price of about $500.00 you can ponder over your own copy… then again, if you can’t afford that, check out the video at the bottom. See Also MOUNTAINS OF BOOKS BECOME MOUNTAINS Via: howtobearetronaut.com Related:  Read, Write, Reflect

Neil Gaiman: Why our future depends on libraries, reading and daydreaming It’s important for people to tell you what side they are on and why, and whether they might be biased. A declaration of members’ interests, of a sort. So, I am going to be talking to you about reading. I’m going to tell you that libraries are important. I’m going to suggest that reading fiction, that reading for pleasure, is one of the most important things one can do. And I am biased, obviously and enormously: I’m an author, often an author of fiction. So I’m biased as a writer. And I’m here giving this talk tonight, under the auspices of the Reading Agency: a charity whose mission is to give everyone an equal chance in life by helping people become confident and enthusiastic readers. And it’s that change, and that act of reading that I’m here to talk about tonight. I was once in New York, and I listened to a talk about the building of private prisons – a huge growth industry in America. It’s not one to one: you can’t say that a literate society has no criminality. It’s tosh.

Irina Vinnik sketchbook (2011) by paul0v2 Thu, 09/22/2011 - 11:18 This amazing sketch book belongs to Russian artist and illustrator Irina Vinnik. These sketches are so amazingly done that they look more like the final piece, each page takes you to a different world of details that makes you dive into this drawings. Take a look and let us know what you think. For more from Irina Vinnik visit vinnik.net

DT Фото и рисунки, арт и креативная реклама Ubu Roi The title is sometimes translated as King Turd; however, the word "Ubu" is actually merely a nonsense word that probably evolved from the French pronunciation of the name “Herbert”, which was the name of one of Jarry’s teachers who was the satirical target and inspirer of the first versions of the play.[4] Jarry made some suggestions regarding how his play should be performed. He wanted King Ubu to wear a cardboard horse's head in certain scenes, "as in the old English theatre", for he intended to “write a guignol". Ubu Roi was followed by Ubu Cocu (Ubu Cuckolded) and Ubu Enchaîné (Ubu in Chains), neither of which was performed during Jarry's 34-year life.[6] One of his later works, a novel/essay on "pataphysics", is offered as an explanation behind the ideas that underpin ‘’Ubu Roi’’. Synopsis[edit] The story may at first glance seem merely frivolous—the obscene nonsense of schoolboys. Development[edit] Ubu[edit] Jarry's woodcut of Ubu Première[edit] Adaptations[edit] Cast[edit] Notes[edit]

Codex Gigas, "the Devil’s Bible" Codex Gigas, otherwise known as ‘the Devil’s Bible’ is the largest and probably one of the strangest manuscripts in the world. It is so large that it is said to have taken more than 160 animal skins to make it and takes at least two people to lift it. It measures approximately 1 metre in length. According to legend, the medieval manuscript was made out of a pact with the ‘devil’, which is why it is sometimes referred to as the Devil’s Bible. It was written in Latin during the 13th century AD, and although the origin of the manuscript is unknown, a note in the manuscript states that it was pawned in the monastery at Sedlec in 1295. The story behind the making of Codex Gigas (“the giant codex”) is that it was the work of one monk who was sentenced to death by being walled up alive. Stories and legends say that the Codex Gigas brought disaster or illness on whoever possessed it during its history. By John Black Related Links Codex Gigas – National Library of Sweden Codex Gigas – Wikipedia

Tattoo Artist Brings Dots And Lines To New Heights In Stunning Geometric Ink Designs Imagine this scene: Sharp waves stretch back for as far as you can see, eating up the horizon in a vast display of stunning movement. Like the peaks and troughs of a chaotic line graph, the seas capture jumping fish as they weave in and out of the thrashes. Careful shading separates the animal bodies as they surface, drenched in the bleeding red pigment of a sunset-flooded landscape. The description might sound like a recounting of an ancient Japanese print or a sprawling painted canvas, but the words are actually attached to artwork of a different sort. Machlev's inked masterpieces would seem at home amidst the fractal imaginings of digital artists or the mind-bending creations of the op art world. Machlev's studio goes by the name "Dots to Lines," and though it's based in Berlin, Germany, his tattoos have been shown across the web, thanks in part to his stunning Instagram account.

Illustration Ink on paper by Alex Konahin Alex Konahin is an illustrator from Riga, Latvia. His drawings are made with dip pen using india ink or other materials. You can find some of his beautiful works here. » read more May Ann Licudine’s art May Ann Licudine (aka Mall) is an illustrator from the Philippines. Skateboarding is a Crime ‘Skateboarding is a Crime‘ is a set of 12 exhibition illustrations created by Gerhard Human in collaboration with Woodies Ramps, a skateboard ramp building company in Cape Town. » read more “Tales of Auto Elasticity” by Chris LaBrooy English artist Chris LaBrooy has created this new series of images based on his previously project “Auto Aerobics“. “Metamorfish”, a stunning series of drawings by Elisa Ancori Elisa Ancori is a very talented artist and illustrator from Barcelona. The art of Shane Shane is a young and very talented graphic designer and illustrator based in Paris, France. » read more New stunning artworks by Camilla d’Errico Anatomical illustrations by Nunzio Paci

The QI Philosophy They say the primal drives are food, sex and shelter. QI says there is a fourth: Curiosity. We are hard-wired for curiosity: it is innate - a fierce need - and, unlike the other three drives, it is what makes us uniquely human. But pure curiosity, completely standard in children under seven and found in great artists, scientists and explorers, is, for some reason, quickly suppressed, sublimated or shrunken in most people. We make do with crossword puzzles, gossip, football results, pub quizzes and Jerry Springer. Our first three drives get plenty of fuel. The world brims and bulges with interesting information, but these days it rarely reaches us. People are living in a daze: swamped with information, starved of stimulation. The human brain is the most complex object in the known Universe, with as many neurons as there are trees in the Amazon rain-forest. People say the brain is like a computer, but it is not. What is life? Whatever is interesting we are interested in.

Escape Into Life 97, Walker Percy This interview was conducted by mail, from May to October, 1986, at an enormous geographical distance; but the interviewer does cherish the memory of a personal meeting. It was on May 4, 1973, a warm Louisiana evening, at Percy’s home in Covington, a small town at the northern end of the causeway running above Lake Pontchartrain (New Orleans is at the southern end). The house is in a wooded area by the bayou, along the Bogue Falaya River. Percy was a tall, slender, handsome man, with a distinguished and thoughtful mien. His manner that day was unassuming, gracious, and gentle. Even later, judging from our correspondence, he was still the same warm, helpful, generous, and patient person, as the very existence of this interview, carried out under such difficult circumstances, will testify. How did you spend your seventieth birthday? An ordinary day. You and your wife recently celebrated your fortieth anniversary. Mine has been a happy marriage—thanks mainly to my wife. Philosophical? Why?

Sweet Station Drunk Mailman Drunk Mailman byJonathan Rogerson May 22, 2015 The drunkest man I ever saw was a mailman. I had gone down to the Echeconnee Creek with my fishing pole and was startled at the sight of him slumped against a bridge piling. There was always trash under the bridge at the Echeconnee—beer cans and fast food wrappers thrown from passing cars, old tires and broken palettes, the remains of campfires. I mistook the mailman at first for a pile of something left on the bank by the latest flood. He fixed me with heavy-lidded yellow-brown eyes. The mailman’s head swayed on unsteady shoulders, and he blinked slowly as he mumbled and slurred something in my direction. “Pardon?” The mailman squinted at me and raised himself to something closer to a sitting position, trying to focus his free-floating hatred.