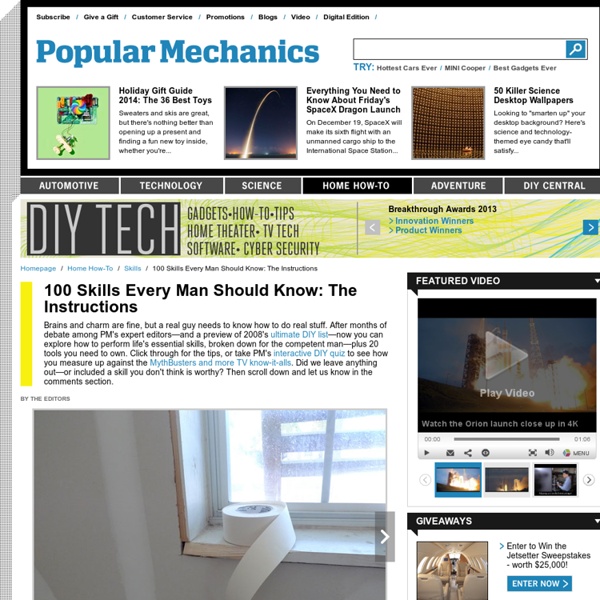 3. Split Firewood Seasoned splitters use a maul, not an ax, to prep firewood. (With its slim taper, an ax head often gets stuck in the end grain.) Don't use a chopping block—it reduces the arc of the swing, which decreases power. Instead, place the log on the ground, 5 in. closer than the length of the maul handle. Michael Lewis

The Wicker Man (1973 Edit Storyline Sgt. Howie travels to Summerisle to investigate the disappearance of a young girl. How to Think Like Leonardo Da Vinci Edit Article Cultivating CuriosityThinking ScientificallyPracticing Creativity Edited by LifeOptimizer.org, Krystle, Teresa, Sondra C and 28 others Leonardo da Vinci was the ultimate Renaissance man: an accomplished scientist, mathematician, engineer, inventor, anatomist, painter, sculptor, architect, botanist, musician, and writer. Whether you want to cultivate curiosity, creativity, or scientific modes of thought, using Leonardo Da Vinci as a role model is an excellent idea. Repel Mosquitos, Dogs, & Annoying Friends with High-Frequency Tones on Android « Android Gadget Hacks Repel Mosquitos, Dogs, & Annoying Friends with High-Frequency Tones on Android There are few sounds that actually make me cringe whenever I hear them: silverware scraping on a plate, nails scratching on a chalkboard, and piercing high-frequency tones. While the former two terrors require some physical hardware, sending out high-frequency sounds is as easy as downloading an app. Of course, since high-frequency sounds are terrible things to hear, this app is great for classroom and office pranks, or quite possibly fending off dogs and bugs.

ChaCha Answers About Gmail Gmail is a free, advertising-supported email service provided by Google. Users may access Gmail as secure webmail, as well as via POP3 or IMAP4 protocols. Gmail was launched as an invitation-only beta release on April 1, 2004 and it became available to the general public on February 7, 2007, though still in beta status at that time. The service was upgraded from beta status on July 7, 2009, along with the rest of the Google Apps suite.

Dude’s Got Skills ← Previous Post Next Post → Dude’s Got Skills jon May 28, 2011 0 Other Stuff You Might Also Like» HomeschoolScientist Upload TheHomeschoolScientist.com Subscription preferences The blue and the green Via my evil twin Richard Wiseman comes one of the best color optical illusions I have ever seen. The original was apparently posted on Buzzhunt Akiyoshi Kitaoka’s incredible optical illusion website: You see embedded spirals, right, of green, pinkish-orange, and blue? Incredibly, the green and the blue spirals are the same color. Fake TV - Burglar Deterrent I was shopping around on Amazon the other day and came across a product that I thought was genius. It is called Fake TV and it acts as a burglar deterrent while you are away from the house. At night, the Fake TV turns on and uses a series of LEDs to project random colors that looks as though someone is inside watching TV when viewed through curtains or shades. There are some videos of it in action on YouTube and I have to say it really does look like someone is inside watching TV. This should scare off the large majority of petty thieves that are just looking for the quick opportunity.