Want to Know If Someone Likes You? 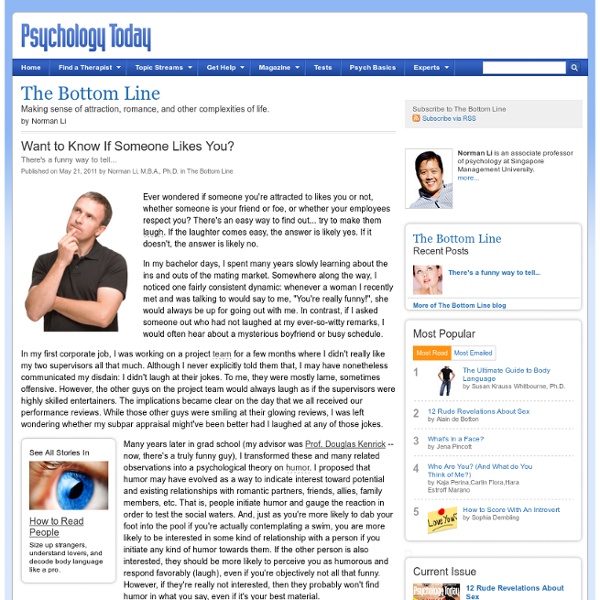 Ever wondered if someone you're attracted to likes you or not, whether someone is your friend or foe, or whether your employees respect you? There's an easy way to find out... try to make them laugh . If the laughter comes easy, the answer is likely yes. If it doesn't, the answer is likely no. In my bachelor days, I spent many years slowly learning about the ins and outs of the mating market. In my first corporate job, I was working on a project team for a few months where I didn't really like my two supervisors all that much. Many years later in grad school (my advisor was Prof. When we meet new people, it may take a while to figure out whether a relationship (of any kind) is desirable. Humor may serve many functions, but the "interest indicator" theory says that an important one is to indicate relationship interest, whether among potential or ongoing mates, friends, and allies, or among family members.

Blog Archive » 6,100 Patients with Anxiety Report Which Treatments Work Best For the live-updated, interactive version of this infographic, click here. Over a year ago, we published one of our first infographics – 9 most effective anxiety treatments. I went ahead and repeated the analysis today, and now we have 25 treatments that people rate as most effective for anxiety. This chart is based on 6,118 people with anxiety who participated in CureTogether surveys, compared to 1,303 people last year. Here are the top 25 treatments for anxiety you may not have tried that thousands of others say worked well for them: 1. To navigate the graph above: The top right quadrant shows the most popular and effective treatments (e.g. Treatments in the lower right quadrant are ones that lots of people have tried but that have below-average effectiveness (e.g. Where did this data come from? This is part of our regular series of research findings. Please tweet, blog, or pass this along to anyone who can benefit or is interested in Anxiety.

Personality Disorders Personality Disorders Dr. C. George Boeree A personality disorder consists of inflexible and maladaptive personality traits which interfere with day-to-day functioning and may involve subjective unhappiness. There are several general criteria: Behavior that differs from cultural expectations in more than just one of the following areas: cognition, emotion, social functioning, and impulse control Problems that are spread across a broad range of situations; Significant problems in social or work life; Problems that are relatively stable and date back at least to adolescence or early adulthood. Psychologists and psychiatrists have divided them into three broad categories, based more on overall similarities than on our understanding of their causes: Cluster A -- People who appear "odd or eccentric." Paranoid PD Schizoid PD Schizotypal PDCluster B -- Highly egocentric people who may appear "dramatic, emotional, erratic." Cluster A - The odd people Paranoid Personality Disorder

Does a brain chemical imbalance cause depression? Many find it hard to swallow Jacqueline Gwynne has taken antidepressants for almost two decades. Photo: Simon Schluter IT WAS the theory that coaxed the ''black dog'' out of hiding. When depression was found to be a chemical imbalance in the brain it helped reduce the stigma around a long misunderstood illness. Just as diabetics lacked insulin, depressives were thought to have a deficiency of the ''happy chemical'' serotonin that helps regulate mood. It led to a global explosion of antidepressant use, premised on the notion that popping a pill could ''correct'' a malfunctioning mind. Advertisement But more than 60 years after the chemical imbalance theory was first advanced, researchers now believe psychiatry got it wrong. ''The chemical imbalance explanation is an oversimplification of a very complex picture,'' says Professor Michael Baigent, a psychiatrist and board director of national depression agency beyondblue, which no longer mentions the imbalance theory in its educational information. ■jstark@theage.com.au

Does The Family Really Need Lipitor and Aspirin? | - ThePeoplesChemist.com | ThePeoplesChemist.com Some things won’t change this year. I’ll still be a bald, tattoo sporting chemist who sings rap music too loud while driving. My kids will still know more about the benefits of individualism over collectivism than most adults. The myth is so prevalent that The American Academy of Pediatrics and The American Heart Association issued new guidelines set out to put children as young as 8 years old on cholesterol-lowering drugs (statins). This shit needs to end now. If you’re smarter than a 5th grader, then I’m going to spoon feed you the real facts about heart disease and the drugs being falsely-prescribed to thwart it. I’m all for living young. In my book, Over-The-Counter Natural Cures, I expose the overt dangers of Lipitor and many other popular drugs, while putting a spotlight on the science that proves how natural medicine, costing less than $10 bucks per month, trumps them all. The Art of Turning Healthy People Into Patients In other words, It’s a fact of life, not a sign of illness.

You Are Not "Chemically Imbalanced"! I just read such a depressing book that it would make just about anyone need an antidepressant if it wasn’t for the fact that the book itself debunks the entire psychopharmacological industry in such a convincing way that it would be maddening if it weren’t so saddening. Especially for those of us who got taken in by what can arguably be called a conscious and intentional conspiracy on the part of Eli Lilly and other big pharmaceutical companies to seduce an unwitting public into a medication merry-go-round, with the aid and help of the psychiatric establishment. Robert Whitaker's is a must-read it if you are currently seeing a psychiatrist for meds consultations. I would also highly recommend that you request your doctor read it as well, because many physicians have been duped along with the rest of us, sold on a biochemical model of psychiatry that has now been demonstrated to have no scientific basis. overnight. But the plain facts of the matter were, and are, that it different.

Consciousness 1. History of the issue Questions about the nature of conscious awareness have likely been asked for as long as there have been humans. Nonetheless, some have argued that consciousness as we know it today is a relatively recent historical development that arose sometime after the Homeric era (Jaynes 1974). Although the words “conscious” and “conscience” are used quite differently today, it is likely that the Reformation emphasis on the latter as an inner source of truth played some role in the inward turn so characteristic of the modern reflective view of self. By the beginning of the early modern era in the seventeenth century, consciousness had come full center in thinking about the mind. By the word ‘thought’ (‘pensée’) I understand all that of which we are conscious as operating in us. Later, toward the end of the 17th century, John Locke offered a similar if slightly more qualified claim in An Essay on Human Understanding (1688), Locke's contemporary G.W. 2. Sentience. Wakefulness.

Dr. Peter Breggin: Benzos and Other Sleep Medications: Deadly and Unnecessary My most recent HuffPost blog, "Xanax Facts and Whitney Houston," looked at how the benzodiazepine Xanax (alprazolam) might have contributed to the singer's death, and reviews many of the hazards of this group of drugs. Since then, a new study has added more warnings about the life-threatening risks of benzodiazepines and closely-related sleep aids. The article in BMJ's Open Access Journal studied the effects of hypnotics on mortality and also specifically on the risk of cancer. The study found that patients receiving any of these drugs for sleep compared to non-users suffered "substantially elevated hazards of dying compared to those with equivalent comorbidity who took no hypnotics." In addition to the increased death rate, there was "an overall cancer increase of 35% among those prescribed high doses." There are always problems in interpreting epidemiological studies, but the data seem valid. The authors drew no firm conclusions about how the medications cause increased mortality.