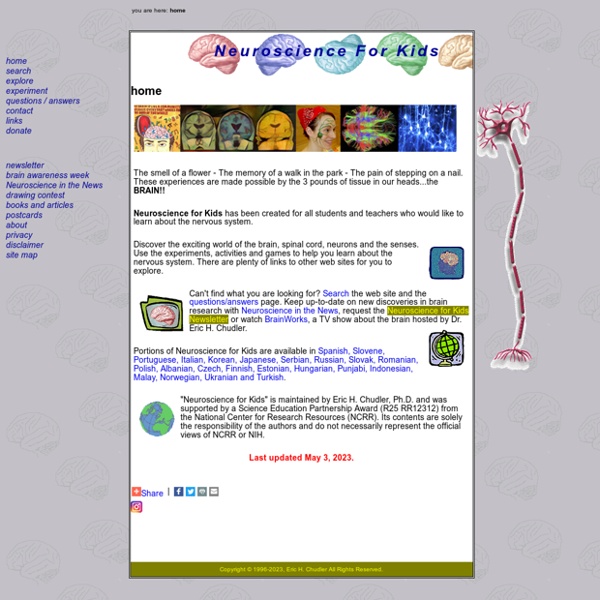 The smell of a flower - The memory of a walk in the park - The pain of stepping on a nail. These experiences are made possible by the 3 pounds of tissue in our heads...the BRAIN!! Neuroscience for Kids has been created for all students and teachers who would like to learn about the nervous system. Discover the exciting world of the brain, spinal cord, neurons and the senses. Use the experiments, activities and games to help you learn about the nervous system. There are plenty of links to other web sites for you to explore. Can't find what you are looking for? Portions of Neuroscience for Kids are available in Spanish, Slovene, Portuguese, Italian, Korean, Japanese, Serbian, Russian, Slovak, Romanian, Polish, Albanian, Czech, Finnish, Estonian, Hungarian, Punjabi, Indonesian, Malay, Norwegian, Ukranian and Turkish. "Neuroscience for Kids" is maintained by Eric H.

The Skeleton Learn about the skeleton and why we need it! © 2012 This website is produced by the Student Recruitment, Admissions and International Development Division at The University of Manchester Required watching for any TED speaker: The science of stage fright One thing can strike fear into the heart of the fiercest warrior, the most powerful CEO and the smartest person in any given room: having to speak in public. The thought of it makes the palms sweat, the heart beat faster and the limbs start to shake. An estimated 75% of people have a fear of speaking in public, and it’s something that nearly everyone who takes the TED stage must work hard to overcome. How Many Bones Are in Your Body? How does that old song go again? The knee bone’s connected to the…? Shin bone? Thigh bone? Both? Aarrgghh!

PATHWAY: The Pathway to Inquiry Based Science Teaching The school constitutes the “epicentre” of formal comprehensive education. Most processes and educational models start there and revolve around the work carried out within its walls. Naturally, the same applies for activities involving the IBSE model, generally acknowledged as one of the most effective teaching approaches;2 the students start their acquaintance with inquiry-based learning at school, with the help of their teachers. Scientist Peyton Robertson has 3 patents pending. He is also 12. When 12-year-old Peyton Robertson sees a problem, he is going to fix it. So when the young scientist noticed a perennial problem in his hometown of Fort Lauderdale, Florida –flooding during the region’s nasty hurricane season – he set to work building a better sandbag. Peyton’s sandbag contains an expandable polymer that’s lightweight and easy to transport when dry, but that becomes a dense solution to hold bags firmly in place when it’s wet. He also added a dash of salt – an addition that makes the solution in the bags heavier than approaching seawater. And to eliminate the gaps between sandbags that tend to let some water through, he designed an interlocking fastener system that holds the bags in place as the polymer expands. As the bags dry after the storm, they return to their original state so they can be reused.

The Brain and Senses Welcome to the Brain and Senses! Hi, we are Dr Ellen Poliakoff and Dr Luke Jones and we’re experimental psychologists. This means that we find out how people think and how the brain works. When we are not teaching - or lecturing as it's called at University! TopMarks Science Science Clips Definitely one not to be missed! Fabulous interactive Flash science activities for primary-aged children matched to curriculum requirements throughout the UK. CERN - unischoolabs Let’s take a look at one of the largest labs in the world. (VIDEO) The Large Hadron Collider (LHC) is a giant scientific facility located 100m under the Earth’s surface, near Geneva on the border of France and Switzerland. It is the most advanced particle accelerator in CERN and is used by scientists in order to study the basic particles of matter. ATLAS is a very big basic particle physics experiment that is performed in the LHC at CERN. (VIDEO)

Energy Quest - Science Projects Chemical/Stored Energy Projects Peanut Power - How much energy is in a single peanut? Find out... The Human Heart: An Online Exploration from The Franklin Institute, made possible by Unisys From the moment it begins beating until the moment it stops, the human heart works tirelessly. In an average lifetime*, the heart beats more than two and a half billion times, without ever pausing to rest. Like a pumping machine, the heart provides the power needed for life.

Bicycles Built Based on People’s Attempts to Draw Them From Memory In 2009 designer Gianluca Gimini started asking friends and strangers to draw a men’s bicycle from memory. While some got it right, most made technical errors — missing fundaments parts of the frame or chain. The exercise is similar to psychological tests used to demonstrate how little we know compared to what we think we do. However, for Gimini this isn’t about proving how dumb we are but, rather, how extraordinary our imaginations can be! Having now amassed a collection of 376 drawings from participants ranging from 3 – 88 years of age, Gimini has started building realistic renderings of the bikes based on these sketches, in a 3D program.