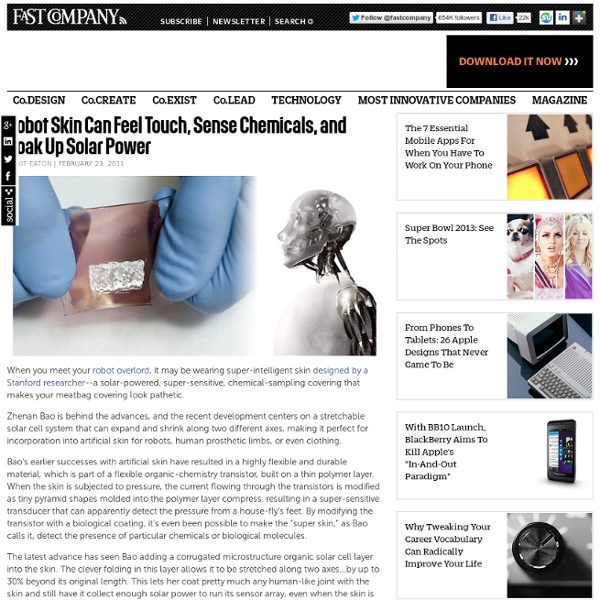 When you meet your robot overlord, it may be wearing super-intelligent skin designed by a Stanford researcher--a solar-powered, super-sensitive, chemical-sampling covering that makes your meatbag covering look pathetic. Zhenan Bao is behind the advances, and the recent development centers on a stretchable solar cell system that can expand and shrink along two different axes, making it perfect for incorporation into artificial skin for robots, human prosthetic limbs, or even clothing. Bao's earlier successes with artificial skin have resulted in a highly flexible and durable material, which is part of a flexible organic-chemistry transistor, built on a thin polymer layer. When the skin is subjected to pressure, the current flowing through the transistors is modified as tiny pyramid shapes molded into the polymer layer compress, resulting in a super-sensitive transducer that can apparently detect the pressure from a house-fly's feet. Related:  Cyborgenic Reengineering the Human Body

Cyborgs – scientists create biological tissue with embedded wiring Under its human skin, James Cameron’s Terminator was a fully-armored cyborg built out of a strong, easy-to-spot hyperalloy combat chassis – but judging from recent developments, it looks like Philip K. Dick and his hard-to-recognize replicants actually got it right. In a collaboration between Harvard, MIT and Boston Children's Hospital, researchers have figured out how to grow three-dimensional samples of artificial tissue that are very intimately embedded within nanometer-scale electronics, to such an extent that it is hard to tell where one ends and the other begins. It could lead to a breakthrough approach to studying biological tissues on the nanoscale, and may one day be used as an efficient, real-time drug delivery system – and perhaps, why not, even to build next-generation androids. So far, our attempts at creating an intimate blend of lab-grown tissues and nanoscale electronics have led to mediocre results at best. Source: Boston Children's Hospital Share

Your Birthday, Your Tree and their meanings (wowzone.com) WOW Poetry, lyrics, music, stories, classics, Wish OnlyWell Find your birthday and its corresponding tree. Then, see the meaning behind it below. Do you recognize yourself? APPLE TREE (the Love) - of slight build, lots of charm, appeal, and attraction, pleasant aura, flirtatious, adventurous, sensitive, always in love, wants to love and be loved, faithful and tender partner, very generous, scientific talents, lives for today, a carefree philosopher with imagination. ASH TREE (the Ambition) - uncommonly attractive, vivacious, impulsive, demanding, does not care for criticism, ambitious, intelligent, talented, likes to play with fate, can be egotistic, very reliable and trustworthy, faithful and prudent lover, sometimes brains rule over the heart, but takes partnership very seriously. BEECH TREE (the Creative) - has good taste, concerned about its looks, materialistic, good organization of life and career, economical, good leader, takes no unnecessary risks, reasonable, splendid lifetime companion, keen on keeping fit (diets, sports, etc.)

Snowflakes Up Close: A Small, Fragile World If you’re one of those people who likes to ponder things while looking out a frosty window on a cold winter day, these pictures will clear up one of those long standing wonders: each snowflake really IS unique. Some look like roman columns, others circuit boards or spaceships. Taken under high magnification using a microscope, these images bring a fragile and beautiful world into view. See Also HARMFUL VIRUSES MADE OF BEAUTIFUL GLASS They say that every snowflake is different. Source: akirathedon.com Known in some circles as the most amazing man in the universe, he once saved an entire family of muskrats from a sinking, fire engulfed steamboat while recovering from two broken arms relating to a botched no-chute wingsuit landing in North Korea.

The Robot Hiring Boom Has Arrived The knock against many technology companies is they create too few jobs in their own countries. That complaint needs serious amending. Tech companies are creating plenty of jobs for robots. Foxconn, the leading manufacturer of electronics in the world -- which makes Apples iPhones and iPads, among other products -- plans to build 500,000 robots over the next three years to either replace or augment the company's human workforce. Foxconn currently supplements its 1.2 million human workers with 10,000 robots. In one regard, this investment will help the company's labor relations. The official response to the media sounded every bit as cynical. Watch: What's the Big Idea? Foxconn has annual revenues of over $60 billion, and the company has put up an astounding compound annual growth rate of over 50 percent for the last decade. This could be a step in the right direction from both a business and humanitarian perspective. What's the Significance? Watch here: Image courtesy of Shutterstock

Interview: Bruce Sterling on the Convergence of Humans and Machines Bruce Sterling is a prominent science fiction writer and a pioneer of the cyberpunk genre. His cyberpunk novels Heavy Weather (1994), Islands in the Net (1988), Schismatrix (1985), The Artificial Kid (1980) earned him the nickname “Chairman Bruce”. Apart from his writings, Bruce Sterling is also a professor of internet studies and science fiction at the European Graduate School. In the interview below, we had the honor of hosting Bruce Sterling in our Next Nature Network headquarters to talk to him about the concept of the convergence of humans and machines. Lots of people are actually talking about and also investing a lot of money in this idea of convergence of the machine and humans. The result is the unbundling of those metaphysical ideas and their replacement by actual products and services That convergence will not happen, because the ambition is basically metaphysical. This is the history of artificial intelligence. You do not want Siri to be more like Alan Turing.

Cheese of the Month Club | Gourmet, Artisanal Cheese Delivery with Free Shipping I give the Seasonal package every year to my Dad and Step Mother, they are both cheesies and always rave about the selections. I've been told not to change my gift...ever! I received the cheese of the month club as a birthday gift from my co-workers. Sent this to my daughter-in-law as a thank-you gift and she has absolutely RAVED about it. I grew up on a dairy farm eating fresh cheese that my family used to make - so I know what the good stuff is supposed to taste like. All of my friends would say that I'm the ultimate foodie.

Line Block Cable by Junbeom So, Lee Ji Eun, Yi-Seo Hyeon, Heo-Hyeoksu & Jeong Minhui Line Up The Tangles The problem addressed in the Line Block Cable is so true to home, it’s the one most of us face when we hook up too many gadgets in one area. Not that we can help it, it’s ideal to have the TV, CD player and the music housed together. As a result, their cables leading up to the socket can get messy and unsightly. Designers: Junbeom So, Lee Ji Eun, Yi-Seo Hyeon, Heo-Hyeoksu & Jeong Minhui Part Human, Part Machine, Cyborgs Are Becoming A Reality Meeting a cyborg for the first time is a nerve-wracking experience. We had arranged to meet in an area of London known as Silicon Roundabout. Near Old Street, the district is home to high-tech start-up firms, giving birth to Britain’s recent software industry boom. In its coffee bars, internet entrepreneurs and programmers share hot drinks and electronic dreams. Neil Harbisson walked into the cafe wearing a bright orange blazer and a 12-inch metal antenna curved over his head. “For me, a cyborg is someone who feels their technology is a part of their biology,” he says. Newsweek Magazine is Back In Print In Harbisson’s case, his is an antenna. The implant was not sanctioned by the medical profession. “My antenna allows me to detect not only colour visible to the human eye, but also beyond,” he adds. Harbisson became known for being the first “officially” recognised cyborg when his passport photograph showing his antenna was accepted by the British Passport Office.

culdesac: the paint evolution for valentine 'the paint evolution' by culdesac for valentine valencia-based designers culdesac have created 'the paint evolution' for the paint company valentine . their collaborative project celebrates the ever changing nature of artistic tools and implements within the valentine brand. brushes and rollers in this creative collection feature an interactive, form-as-function approach to the construction of each piece. one may anticipate the mark and movement of the implement in an artist's hand simply by examining the form of each object. {*style:<i>'genetic mutations give birth to imaginative instruments: the brush compass, pendulum or whip give us a clue to the behavior of paint through sketches and through history' </i>*} -culdesac the 'whip cephalus' is an essential species in the 'action painting' technique a brush which allows for painting by hand a brush in which the painter moves the brush with a clenched fist 'formacterus' was developed due to several geometric mutations, today evolved to photoshop