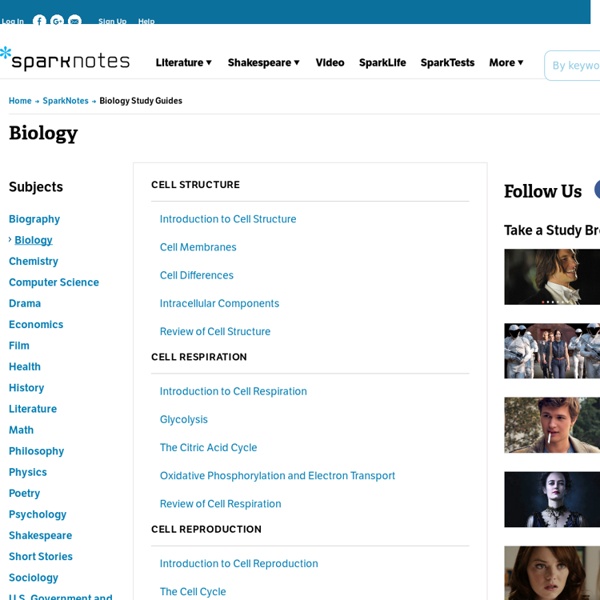 7 Health Benefits of Ginger I love the aromatic spicy taste of ginger and how it adds a unique flavor to my meals and beverages. But ginger has plenty of other beneficial properties besides its taste. Chinese medicine and Indian Ayurvedic medicine have used ginger to help treat and prevent health problems for thousands of years. In the west, we are just learning how valuable it is. Revised AP Biology Exam While attending the AP Annual Conference last week I was able to sit in on a session hosted by the Educational Testing Service (ETS). ETS will be writing the new AP Biology Exam debuting the spring of 2013. The session offered insights into the method in which exam questions will be written.

Don't Mix Your Meds With These Foods Like the foods and drinks above, some dietary supplements, including vitamins, minerals, and herbals, can cause problems if you take them with some drugs. Even a multivitamin with iron can negate the effects of many drugs. But herbs are the worst offenders, and St. Fresh Fruits, Veggies, Not Medication If you’d rather eat fresh fruit or a carrot than pop a pill to stay healthy, go for it! Increasing research indicates that a diet that includes fresh fruits and vegetables could be as good or better for you than drugs when it comes to controlling or eliminating some diseases and illnesses. Here are five ways eating fresh fruits and veggies could make you healthier than medications you may be taking: 1) Statins - Oxford University researchers have found that eating a piece of fruit each day significantly lowers the likelihood of a heart attack. In fact, “eating even one piece of fruit each day lowered the risk of a heart attack or stroke by one third over a seven year period,” a result that’s as significant as taking a statin, but without the side effects.

Common Medications Linked To Brain Disease When most people think of brain disease, they probably think of genetics, traumatic brain injury and other causes. But, there is a silent brain disease culprit that few people know about: prescription and over-the-counter drugs. Multiple studies even link some medications to dementia—a loss of mental ability severe enough to interfere with normal activities of daily living, lasting more than six months, not present since birth and not associated with a loss or alteration of consciousness. At Chernobyl and Fukushima, radioactivity has seriously harmed wildlife The largest nuclear disaster in history occurred 30 years ago at the Chernobyl Nuclear Power Plant in what was then the Soviet Union. The meltdown, explosions and nuclear fire that burned for 10 days injected enormous quantities of radioactivity into the atmosphere and contaminated vast areas of Europe and Eurasia. The International Atomic Energy Agency estimates that Chernobyl released 400 times more radioactivity into the atmosphere than the bomb dropped on Hiroshima in 1945. Radioactive cesium from Chernobyl can still be detected in some food products today. And in parts of central, eastern and northern Europe many animals, plants and mushrooms still contain so much radioactivity that they are unsafe for human consumption. The first atomic bomb exploded at Alamogordo, New Mexico more than 70 years ago.

What Happens to Tattoos When You Remove Them? Wonder what'll happen to the geeky tattoos people are getting now? The same thing that happened to all the tribal tattoos people got 20 years ago -- they'll get pooped out: Kyle Hill is the science editor for The Nerdist. He knows what he’s talking about. First of all, tattoos stay on your skin for two reasons: 16 Of The Best Foods To Control Type 2 Diabetes James Colquhoun, Filmmaker (Food Matters and Hungry For Change) Concerned about needing medication to control your Type 2 Diabetes? Here are 16 of the best foods to manage your blood sugar levels naturally and help reduce the likelihood of needing medication! Diabetes mellitus is a chronic condition whereby the body does not produce enough insulin, or the cells of the body are not responding properly to the insulin that is produced.