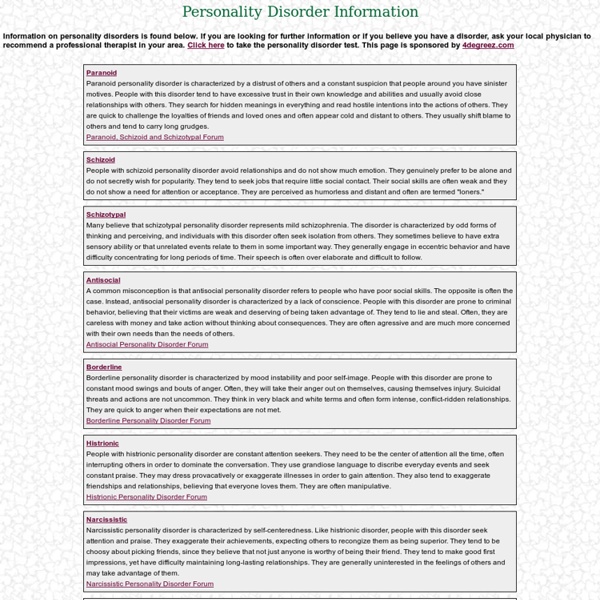 What Does Your Body Language Say About You? How To Read Signs and Recognize Gestures - Jinxi Boo - Jinxi Boo Art by LaetitziaAs we all know, communication is essential in society. Advancements in technology have transformed the way that we correspond with others in the modern world. Because of the constant buzz in our technological world, it's easy to forget how important communicating face-to-face is.

Revenge of the Introvert After ten years as a psychologist practicing psychodynamic psychotherapy , I reclined on the couch of my own analyst feeling burdened by my chosen work. After a day of seeing patients, I was drained. I had been trained to listen at many levels—words, emotions, unconscious disclosures—and I took all of that in and sorted it out in my mind. I was good at helping others discover and pursue what they wanted out of life. But at day's end I had no resources left to do it for myself.

Highly Sensitive People Emotional Problems - Are You Too Sensitive Photo Credit: George Doyle/Stockbyte Many years ago I had a falling-out with a girlfriend that proved so painful, I can hardly talk about it today. My friend (let's call her Mary) was a colorful television personality and had the world at her feet. She was engaged to a handsome European, and her face was plastered across the newspapers. I was working for 60 Minutes at the time, and we often met for lunch. Then one day her show was canceled and she asked me — casually, as though it didn't really matter — if I'd put her forward as a reporter for 60 Minutes. 10 Ways Our Minds Warp Time How time perception is warped by life-threatening situations, eye movements, tiredness, hypnosis, age, the emotions and more… The mind does funny things to our experience of time. Just ask French cave expert Michel Siffre. In 1962 Siffre went to live in a cave that was completely isolated from mechanical clocks and natural light. He soon began to experience a huge change in his perception of time. When he tried to measure out two minutes by counting up to 120 at one-second intervals, it took him 5 minutes.

10 Life Changing Tips Inspired By Oprah Here are ten life changing tips inspired by quotes from Oprah Winfrey: 1. Be grateful "Breathe. 10 Simple Postures That Boost Performance Psychological research suggests simple actions can project power, persuade others, increase empathy, boost cognitive performance and more… We tend to think of body language as something that expresses our internal states to the outside world. But it also works the other way around: the position of our body also influences our mind. As the following psychological research shows, how we move can drive both thoughts and feelings and this can boost performance. 1.