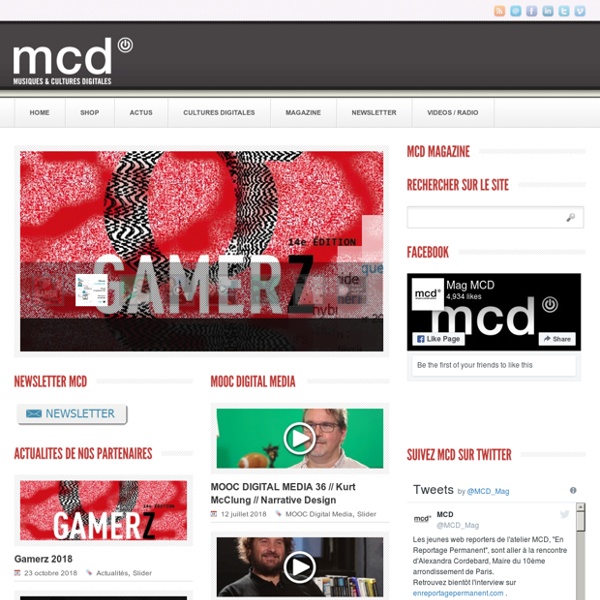 Why the Music Industry Must Change Its Strategy to Reach Digital Natives Mark Mulligan is vice president and research director at Forrester Research, serving consumer product strategy professionals. He is a leading expert on music and digital media. The music industry's fortunes (or lack thereof) are familiar to most. The CD is suffering one of the longest death rattles in consumer product history, and it is becoming painfully clear that digital downloads are no knight in shining armor about to whisk up the fallen music business and ride off into the revenue growth sunset. Anarchafeminist Hackerhive A meeting for women and non-male people to talk with each other about computer stuff. At Noisebridge, we've been meeting in the library on Wednesdays from 6pm till whenever (usually at least 8 or 9). If you're in another city and want to be on the mailing list, you are welcome too! Mailing list: Hacking * Making * Lulz * Antiracism * Feminisms * Womanisms * Empowerment * Action * Mischief * Activism * Coding * Decolonization * Survival * Trolling * Solidarity * Cake * Meetups * Fun * And More! For women and people who identify or have identified significantly as non-male.

CURATORIAL DICTIONARY : Curatorial Dictionary: Unpacking the Oxymoron An Introduction The idea and an articulated need of a curatorial dictionary emerged during a reading seminar in preparation for one of the workshops of tranzit.hu’s Free School for Art Theory and Practicein Budapest. [1] While discussing and reading about concepts used within international curatorial discourse and practice, we recognized a gnoseological uncertainty: we could clearly point to (or defer to) projects and relevant authors/texts which reflect on the specific concepts; yet—despite the vast amount of writings related to curating—we proved to be unable to determine more general textual surveys about the meanings and conceptual roots of these very notions. Those involved in early discussions about the dictionary came together to form a working group. The gradually emerging format of the dictionary as a research—and, plausibly, also a problematizing tool—was adopted to serve various purposes.

[SZ] Future internet There is no doubt that the rapid development in robotics technology has dramatically changed the interaction model between the Industrial Robot (IR) and the worker. As the current robotic technology has afforded very reliable means to guarantee the physical safety of the worker during a close proximity interaction with the IR. Therefore, new forms of cooperation between the robot and the worker can now be achieved. Collaborative/Cooperative robotics is the new branch of industrial robotics which empowers the idea of cooperative manufacturing. Cooperative manufacturing significantly depends on the existence of a collaborative/cooperative robot (cobot).

G8: Protect the Net Privacy Policy Last modified: November 11, 2011 This Privacy Policy is continually under review to ensure your privacy and security. This website, (the “Site”) is operated by Access (“We” or “Us”). We work hard to protect your privacy. We Make Money Not Art - hacktivism Just found out that the utterly brilliant and fascinating thesis that Otto von Busch presented last year at the University of Gothenburg is available as an online PDF. So leave Dan Brown on the shelves and take this one on the beach this Summer, ok? Short list of publications worth buying/downloading.

[US] Leonardo/ International society for the arts, sciences and technology (ISAST) Leonardo was founded in 1968 in Paris by kinetic artist and astronautical pioneer Frank Malina who saw the need for a journal to serve as an international channel of communication among artists, with emphasis on the writings of artists who use science and developing technologies in their work. Published by The MIT Press and led by executive editor Roger Malina, Leonardo has become the leading international peer-reviewed journal on the use of contemporary science and technology in the arts and music and, increasingly, the application and influence of the arts and humanities on science and technology. Leonardo is interested in work that crosses the artificial boundaries separating contemporary arts and sciences. Featuring illustrated articles written by artists about their own work as well as articles by historians, theoreticians, philosophers and other researchers, the journal is particularly concerned with issues related to the interaction of the arts, sciences and technology.

The Content Strategist as Digital Curator The term “curate” is the interactive world’s new buzzword. During content creation and governance discussions, client pitches and creative brainstorms, I’ve watched this word gain traction at almost warp speed. As a transplant from museums and libraries into interactive media, I can’t help but ask what is it about this word that deserves redefinition for the web? Article Continues Below We Make Money Not Art - activism “The collective wisdom of more than a hundred grassroots organizers from five continents. It’s everything you need for a DIY uprising of your own” “How can acts of listening, walking, conversing, cooking, and gardening be related to, or even equated with, the well-established history of painting, drawing, sculpture, installation, and other recognized art forms?” Reilly addresses the urgent need in the contemporary art world for curatorial strategies that provide alternatives to exclusionary models of collecting and display. In so doing, she provides an invaluable source of information for current thinkers and, in a world dominated by visual culture, a vital source of inspiration for today’s ever-expanding new generation of curators

Google bets on Africa as the next internet hotspot To global search giant, Google, Africa is the next Internet hotspot. Globally, there are 94 domains registered per 10 000 users. However, in Africa, there is only one domain per 10 000 users. As such, there is tremendous potential for growth on the continent in the web space. Kenya launches Africa's first Open Data Initiative - TNW Africa Kenya recently launched Sub-Saharan Africa’s first Open Data Initiative, and is one of a series of firsts for the East African country this year, which has included the launch of Africa’s first mobile apps lab back in June. The Kenya Open Data Initiative (KODI) was launched at a high profile event in Nairobi yesterday, with Kenya’s President Mwai Kibaki present as well as politicians, government officials and IT professionals. It was launched in partnership with organizations such as The World Bank, Ushahidi and the iHub.