Do not stand at my grave and weep 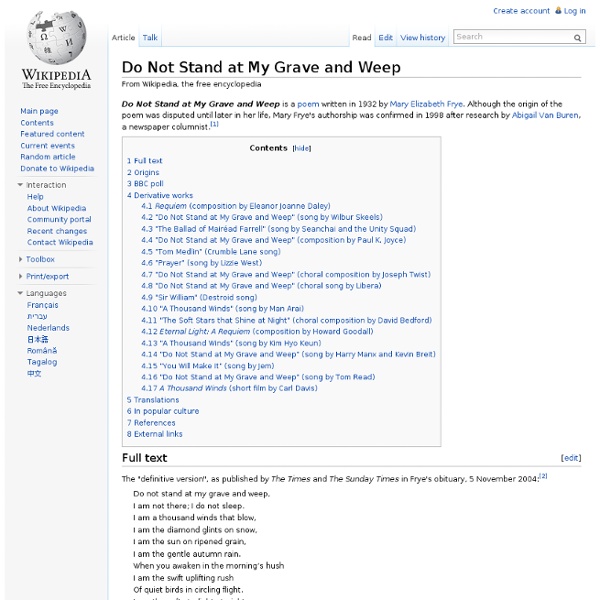 Do Not Stand at My Grave and Weep is a poem written in 1932 by Mary Elizabeth Frye. Although the origin of the poem was disputed until later in her life, Mary Frye's authorship was confirmed in 1998 after research by Abigail Van Buren, a newspaper columnist.[1] Full text[edit] Do not stand at my grave and weep, I am not there; I do not sleep. I am a thousand winds that blow, I am the diamond glints on the snow, I am the sunlight on ripened grain, I am the gentle autumn rain. When you awaken in the morning’s hush I am the swift uplifting rush Of quiet birds in circled flight. I am the soft stars that shine at night. Do not stand at my grave and cry, I am not there; I did not die. Origins[edit] Mary Frye, who was living in Baltimore at the time, wrote the poem in 1932. Mary Frye circulated the poem privately, never publishing or copyrighting it. The poem was introduced to many in Britain when it was read by the father of a soldier killed by a bomb in Northern Ireland. BBC poll[edit] ... Rocky J.

Academy of American Poets Maya Angelou was born Marguerite Johnson in St. Louis, Missouri, on April 4, 1928. She grew up in St. Louis and Stamps, Arkansas. She was an author, poet, historian, songwriter, playwright, dancer, stage and screen producer, director, performer, singer, and civil rights activist. 47 Mind-Blowing Psychology-Proven Facts You Should Know About Yourself I’ve decided to start a series called 100 Things You Should Know about People. As in: 100 things you should know if you are going to design an effective and persuasive website, web application or software application. Or maybe just 100 things that everyone should know about humans! The order that I’ll present these 100 things is going to be pretty random.

Robert Frost - Books, Biography, Quotes Robert Frost (1874-1963) was born in San Francisco, California. His father William Frost, a journalist and an ardent Democrat, died when Frost was about eleven years old. His Scottish mother, the former Isabelle Moody, resumed her career as a schoolteacher to support her family. 25 Snacks That Will Give You Energy Throughout The Day & Kimberly Snyder's Health and Beauty Blog - StumbleUpon *Alert* The Glowing Lean System Registration is OPEN… CLICK HERE to learn more Our energy is integrally connected to the foods we eat. The foods we choose to put in our body can either boost our energy, or drag us down. Here are great energizing foods that will support our general well-being and health.

Slam Poet Blythe Baird Has a Powerful Message About Rape Culture All Women Need to Hear Blythe Baird is 18 years old. This is her Tumblr. In her poem "Pocket-Sized Feminism," Baird critiques rape culture — which, as she conveys, is no different from the culture in which young women grow up. Her message to women? Speak up. 8 Things to Stop Doing Right Now The main purpose of this site is to help you be who you want to be and live the life you want to live. I think everyone deserves that at the bare minimum, and I believe that everyone can achieve it. Therefore, a lot of the messages that I share here are positive, inspiring and action orientated. With this post I want to change direction, and not cover the things you should be doing, but the things you shouldn't be doing. I'm not even going to be half-hearted about it and say you should 'probably' stop doing these things or 'you can if you want'.

Though I Am Young and Cannot Tell accent: emphasis given a syllable in ordinary usage, as provided by a pronouncing dictionary. See also stress. accentual-syllabic: the prosodic mode that dominated English-language poetry 1400-1900, and that this tutorial exclusively addresses. Alike distinct from verse that is quantitative (measuring duration, as in classical Greek and Latin), accentual (counting only beats, as in Old English), and syllabic (counting only syllables, as in certain: 20th-cy. experiments), accentual-syllabic verse is based on recurrent units (feet) that combine slacks and stresses in fixed sequence. Inferno by Dante Alighieri Average Rating: 5.0 out of 5 based on 3 ratings 13 Favorites on Read Print Read online Write a review Add to favorites Add to bookshelf

Jenny vs. Spencer - StumbleUpon JENNY vs. SPENCER: SPENCER RESPONDS! I'm sure that everyone has seen Jenny quitting via dry-erase board, but now Jenny's mysterious boss has responded the same way. Chaos poem. [Journal of the Simplified Spelling Society, 1994/2 pp27-30 later designated J17] Introduced by Chris Upward A number of readers have been urging republication of The Chaos, the well-known versified catalogue of English spelling irregularities. The SSS Newsletter [later designated J3] carried an incomplete, rather rough version in the summer of 1986 (pp.17-21) under the heading 'Author Unknown', with a parallel transcription into an early form of Cut Spelling. The Dalai Lama’s 18 Rules For Living May 6, 2011 | 42 Comments » | Topics: Life, List At the start of the new millennium the Dalai Lama apparently issued eighteen rules for living. Since word travels slowly in the digital age these have only just reached me. Here they are. Take into account that great love and great achievements involve great risk.

Brave New World by Aldous Huxley Chapter One A SQUAT grey building of only thirty-four stories. Over the main entrance the words, CENTRAL LONDON HATCHERY AND CONDITIONING CENTRE, and, in a shield, the World State's motto, COMMUNITY, IDENTITY, STABILITY. The enormous room on the ground floor faced towards the north. Cold for all the summer beyond the panes, for all the tropical heat of the room itself, a harsh thin light glared through the windows, hungrily seeking some draped lay figure, some pallid shape of academic goose-flesh, but finding only the glass and nickel and bleakly shining porcelain of a laboratory. Wintriness responded to wintriness.

How Famous Companies Got Their Names Ever wondered about how famous brands got their names from? Here are a couple of explanations. Via

Just one I picked because I thought it was interesting :) by bobdimmer Jul 28