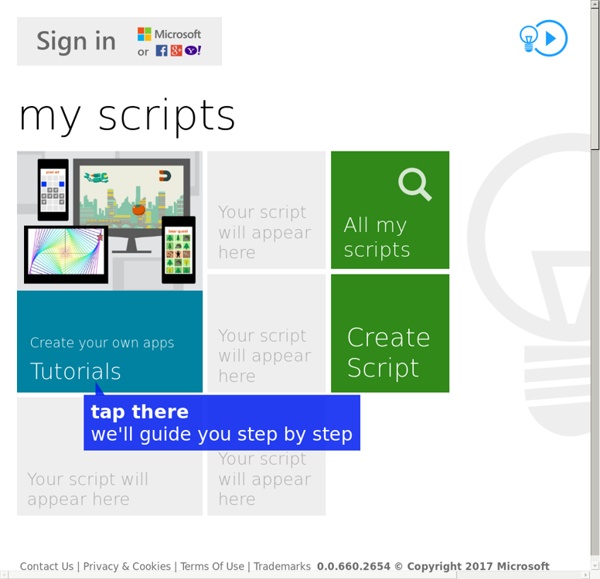 Kodu Kodu is a new visual programming language made specifically for creating games. It is designed to be accessible for children and enjoyable for anyone. The programming environment runs on the Xbox, allowing rapid design iteration using only a game controller for input. Programming as a Creative Medium The core of the Kodu project is the programming user interface. Coding Boot Camps Fast Track Females into Innovation by Natalie Shoemaker The gender gap is Silicon Valley, where fewer than one in five technical employees are women, is no longer a well-kept secret. But we can't just blame the computing industry for its dearth of female workers. Coding for the Common Core: 15 iPad Coding Apps for K-5+ Check out These Fun iPad Apps for Helping Young Students Learn About Coding, Logic, Math, & More! Dr. Leslie Suters is a faculty member in the College of Education’s Curriculum & Instruction Department at Tennessee Tech University. She will present the session “Coding for the Core: Using the iPad to Develop Computational Thinking and Mathematical Practices” at the 2015 Teaching and Learning with the iPad Conference this November in Raleigh, NC.

Teaching Kids to Code Every era demands—and rewards—different skills. In different times and different places, we have taught our children to grow vegetables, build a house, forge a sword or blow a delicate glass, bake bread, create a soufflé, write a story or shoot hoops. Now we are teaching them to code. We are teaching them to code, however, not so much as an end in itself but because our world has morphed: so many of the things we once did with elements such as fire and iron, or tools such as pencil and paper, are now wrought in code. We are teaching coding to help our kids craft their future. In this collection we share many different perspectives on coding, from a university professor's vantage point (MIT's Mitch Resnick describes why learning to code is like learning to learn) to an entrepreneur's reflections from his cross-country roadtrip to bring coding—and his stuffed dog—to classrooms across the U.S.

Three Great Tools for Teachers to Create and Publish Their Own Apps February 7, 2015 Looking for some good tools to use to create and publish your own apps? The list below has you covered. It features a number of key platforms that enable you to easily design educational apps to utilize in your instruction. You don’t have to be a coding geek to operate these tools, the process is less complicated.

Download Swift Latest Development Snapshots Development Snapshots are prebuilt binaries that are automatically created from mainline development branches. These snapshots are not official releases. They have gone through automated unit testing, but they have not gone through the full testing that is performed for official releases. Swift is covered by the Swift License at swift.org/LICENSE.txt. Apple Platforms

Why Kids Should Make the Video Games They Love to Play When educator Lynn Koresh hears from kids that they want a career doing something with computers, she asks, “To do what with computers?” Adults often encourage kids to pursue science, technology, engineering and math (STEM) skills, and computing classes are usually a first stop. But Koresh knows it’s the real-world applications of computational thinking and coding language skills that bring such knowledge to life. The 16 Best App Makers to Create Your Own Mobile App We’ve been following the website builder market for more than five years now and creating a simple website is not really much of a problem these days. But does the same hold true for mobile apps? Can it be possible to create a mobile app without having a clue about programming languages? While my wife was toying with the idea of creating a mobile app for her museum website, we took the opportunity to try out some of the best app makers on the market.

The Languages And Frameworks You Should Learn In 2016 Martin Angelov A lot happened in the software development world in 2015. There were new releases of popular programming languages, new versions of important frameworks and new tools.