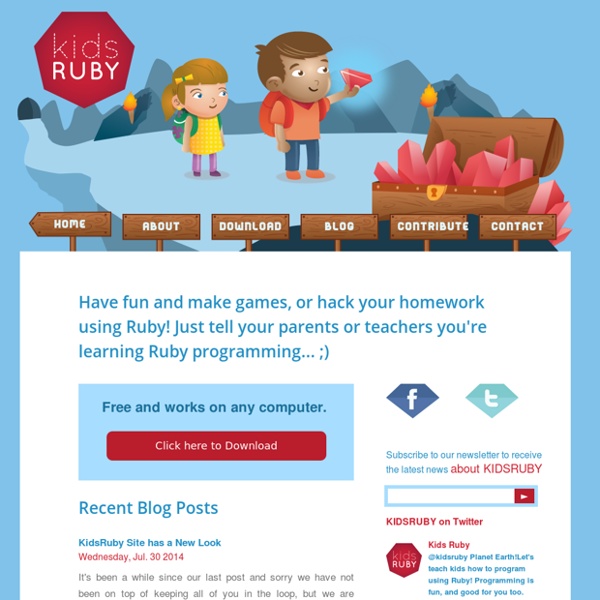 We've just released the latest KidsRuby version 1.3, and we're very excited to announce built-in support for the Sphero robotic ball from Orbotix (http://gosphero.com). If you were at RubyConf in Denver you might have seen the preview, and now we've got everything you need to get started learning about the wonderful world of robotics! Support for more robots coming soon... In addition, we now have the standalone KidsRuby Installer for Raspberry Pi (Raspbian), and KidsRuby Installer for Debian, including Ubuntu and other Debian-based Linux versions. Get them while they're hot from our download page at http://kidsruby.com/download. Our brand new 1.2 release of KidsRuby has gone international, now with full Japanese, French, and Spanish translations.

New Minecraft Mod Teaches You Code as You Play Like many nine-year-olds, Stanley Strum spends a lot of time building things in Minecraft, the immersive game that lets your create your own mini-universe. The game has many tools. But Stanley is one of many players taking the game a step further by building entirely new features into the game. And, more than that, he’s also learning how to code. He’s doing this with a tweak to the Minecraft game, called LearnToMod. Modifications like this, called “mods,” are a big part of the game’s runaway success. Europe Code Week 2015 - Resources and guides EU Code Week is a grass-root movement run by volunteers who promote coding in their countries as Code Week Ambassadors. Anyone – schools, teachers, libraries, code clubs, businesses, public authorities – can organise a #CodeEU event and add it to the codeweek.eu map. To make organising and running coding events easier, we have prepared different toolkits and selected some of the best lesson plans, guides and other resources. Presentations and toolkits Local resources in your language

Coding in the Classroom: 16 Top Resources As cool as technology is, its intricacies and inner workings are sometimes intimidating, especially for young people who may be more interested in what technology can do for them rather than what they can do with technology. However, when students hurdle that obstacle and see the value of computer science — specifically coding — they gain a broadened perspective and the potential for a rewarding career in the tech field. The following resources will help you teach your students the basics of coding and will provide tips on how to keep kids interested as you go. Tools to Use in Class Can you make coding fun for your students?

App Inventor Get Started Follow these simple directions to build your first app! Tutorials Step-by-step guides show you how to create even more apps. Teach 7 Fun and Creative Apps and Websites That Teach Kids to Code These iOS and Web Apps are Visually Oriented and Kid-Friendly and Help to Build Critical Logic and Problem Solving Skills Computer coding is becoming an increasingly popular activity for today’s technology oriented kids. Even kids who do not plan to grow up and become computer programmers are enjoying the control and autonomy that coding delivers. Coding encourages kids to be creative, think logically and develop critical thinking skills that they will need throughout their lives.

Alice.org Alice is an innovative 3D programming environment that makes it easy to create an animation for telling a story, playing an interactive game, or a video to share on the web. Alice is a freely available teaching tool designed to be a student's first exposure to object-oriented programming. It allows students to learn fundamental programming concepts in the context of creating animated movies and simple video games. In Alice, 3-D objects (e.g., people, animals, and vehicles) populate a virtual world and students create a program to animate the objects. In Alice's interactive interface, students drag and drop graphic tiles to create a program, where the instructions correspond to standard statements in a production oriented programming language, such as Java, C++, and C#.

12 Sites That Will Teach You Coding for Free There was a time when knowing how to program was for the geekiest of geeks. That’s not exactly the case today. As most entrepreneurs, freelancers and marketers will tell you, learning how to program can help you succeed. Over the past year, I've been learning to code. It's helped me to become a much better entrepreneur -- I can dive in when my team needs to fix a few bugs on the site.