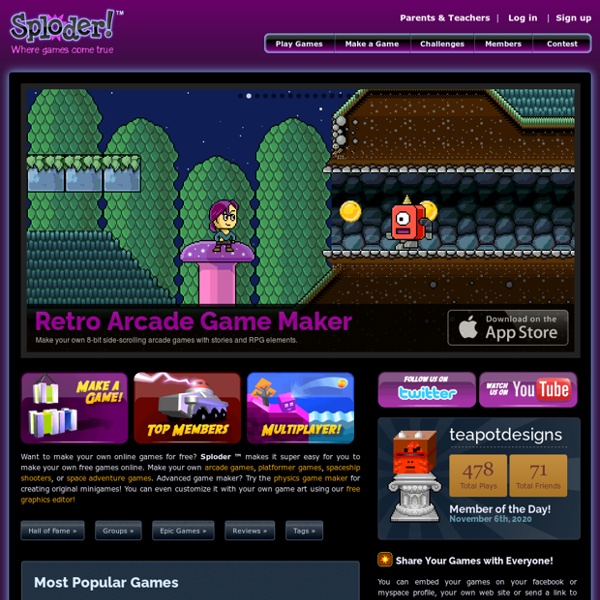 Gamification Categorization[edit] Gamification in a narrow sense is used in a non-game context, is built into the service system, and is aiming at an infinite experience. It does not aim at creating a game but offering a gameful experience. Game-Based Learning Units for the Everyday Teacher Game-based learning (GBL) is getting a lot press. It is an innovative practice that is working to engage kids in learning important 21st century skills and content. Dr. Judy Willis in a previous post wrote about the neurological benefits and rationale around using games for learning.

Grand Theft Childhood? Quick Links for Parents ☛ watch Dr. Olson’s videos for parents • What’s in that video game my child wants? ESRB ■ Gamespot ■ Common Sense Media • How do game ratings work? ESRB • How do I use the parental controls to limit what (or when) my kid plays? iPad As.... iPads have exploded throughout schools and classrooms. Their flexibility, versatility, and mobility make them a phenomenal learning tool. As teachers seek ways to integrate these devices, we recommend focusing on specific learning goals that promote critical-thinking, creativity, collaboration, and the creation of student-centric learning environments. In other words, begin with..... Adapt Your Gamification Designs with Jesse Schell’s Four Pillars Adapt and Evolve Your Gamification Through Jesse Schell’s Four Pillars of Design Jesse Schell describes in his brilliant book The Art of Game Design the four pillars that is comprised of a game: Technology, Aesthetics, Mechanics, and Story/Narrative. When gamifying a process it is smart not to overlook any of the pillars.

Wesley Ninja Dojo Do you have what it takes... ...to become a Wesley Academy Ninja Master? It takes hard work and lots of dedication. The only reason to become a Ninja Master is to better prepare yourself for lifes adventures. The nine golden rules of using games in the language classroom I think you might want to download these activities so you can use them later… so here’s a handy PDF file of this blog post! I’ve long been an admirer of the use of games in teaching. Indeed, one of my most popular posts ever here on the Teach them English blog is the rather misleadingly titled ‘Why I don’t use games in the language classroom’ which, if you’ve got a spare ten minutes, gives you as good a background into the role of games in the language classroom as you’ll ever need (no need for me to be modest!). Games remain a fundamental part of my teaching as they can be used to liven up lessons, while also creating a relaxed learning atmosphere where learners feel confident to practice new language skills. The importance of games cannot be understated in the role they play in providing alternative ways of learning or showing that you can recall what has been learned. 1.

Gaming to re-engage boys in learning: Ali Carr-Chellman on TED Business 7 TED Talks on the need to encourage entrepreneurship Could unemployment be a factor that leads to terrorism? In today’s talk, peace strategist Mohamed Ali (not to be confused with the boxer) introduces us to the youth of Mogadishu, Somalia — 70 percent of whom are unable to find jobs. In this talk, Ali highlights just how appealing the messages of terrorist organizations and […] Productivity Tips - Google Apps for the iPad Productivity Tips To increase efficiency, it helps to add any commonly-accessed websites, such as the Google eBookstore or Google Docs, to the home screen as a bookmark. This allows the shortcut to show up as an app icon, taking users directly where they need to go. To do this, tap the share button at the top of the screen and choose Add to Home Screen. In addition, many third-party apps and software are available to maximize productivity and make tasks simpler for you and your students. Some include:

The Pedagogy of Play and the Role of Technology in Learning The goal of the videogame “Civilization” is to build a civilization that stands the test of time. You start the game in 4000 B.C. as a settler and, with successful gameplay, can create a civilization that lasts until the Space Age. Throughout the game, you need to manage your civilization’s military, science, technology, commerce and culture. One doesn’t read “The Decline and Fall of the Roman Empire” to develop strategy before playing the game. One starts by playing. zombpocalypse- Rosehill Secondary College has been overrun by slow, smelly, brain-dead beings that can only make grunting-moaning noises, no it isn’t the students out on recess, it is….dun….dun….dar….THE ZOMBIE APOCALYPSE! It all started when teachers started noticing that there were more BRAINDEAD people around than usual, it was like a RESIDENT EVIL had taken root at Rosehill. Then, 28 DAYS LATER there were WALKING DEAD beings everywhere, it was a real ZOMBIELAND. Then the fearless science and maths teachers came to the rescue to save Rosehill from becoming a LAND OF THE DEAD. By hypothesising and using a disturbing form of algebra that is usually illegal, they had Rosehill clear of zombies 28 WEEKS LATER. Unfortunately, one NIGHT OF THE LIVING DEAD, they made a tremendous error in their experimental design to create a cure.

Game based learning & Gamification Lots people want to get started with game based learning, gamification and serious games in their training. We’ve been curating game related content for over a year and a half while conducting our own research and case studies. Here are 100 articles related to games and learning. Some of them are research-based, while others just offer an interesting perspective to spark discussion. Take what you need and share this with a colleague.