8 math talks to blow your mind 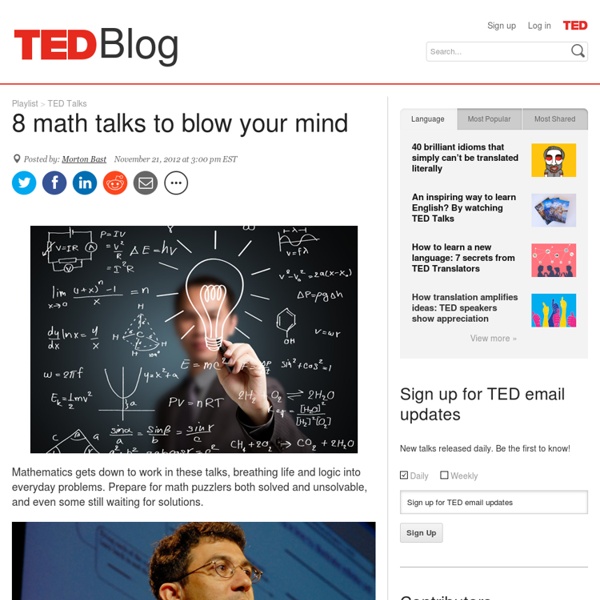 Mathematics gets down to work in these talks, breathing life and logic into everyday problems. Prepare for math puzzlers both solved and unsolvable, and even some still waiting for solutions. Ron Eglash: The fractals at the heart of African designs When Ron Eglash first saw an aerial photo of an African village, he couldn’t rest until he knew — were the fractals in the layout of the village a coincidence, or were the forces of mathematics and culture colliding in unexpected ways? Here, he tells of his travels around the continent in search of an answer. How big is infinity? There are more whole numbers than there are even numbers … right? Arthur Benjamin does “Mathemagic” A whole team of calculators is no match for Arthur Benjamin, as he does astounding mental math in the blink of an eye. Scott Rickard: The beautiful math behind the ugliest music What makes a piece of music beautiful?

Marty and Michael in Math Magic Land Is there an Occulted Numeric Language Embedded Within Our Culture? Via Midwest Real A visual representation of Pi to 10,000 digits. graph: xy = –12 x Image InputX Upload an image from your computer: Enter a URL for an image: Terms | Privacy All images »Recent images Atomic Goal - 800 Years of Power From Waste Matthew Ryan Williams for The New York Times Ted Ellis of TerraPower working on a fuel system. Matthew Ryan Williams for The New York Times Ash Odedra, wearing glasses, the principal design engineer at TerraPower in Bellevue, Wash., a company that is being led by Bill Gates and Nathan Myhrvold, a fellow Microsoft billionaire. The quest is for a new kind of nuclear reactor that would be fueled by today’s nuclear waste, supply all the electricity in the United States for the next 800 years and, possibly, cut the risk of nuclear weapons proliferation around the world.

You Can Easily Learn 100 TED Talks Lessons In 5 Minutes Which Most People Need 70 Hours For The other week I watched 70 hours of TED talks; short, 18-minute talks given by inspirational leaders in the fields of Technology,Entertainment, and Design (TED). I watched 296 talks in total, and I recently went through the list of what I watched, weeded out the crappy and boring talks, and created a list of the 100 best things I learned ! This article isn’t entirely about productivity, but I guarantee you’ll learn a thing or two. Here are 100 incredible things I learned watching 70 hours of TED talks last week!

Inconsistent Mathematics, Reutersvärd, and Buddhism: An Interview with Chris Mortensen Inconsistent Mathematics, Reutersvärd, and Buddhism: An Interview with Chris Mortensen by Michael Lopresto Chris Mortensen is Emeritus Professor of Philosophy at the University of Adelaide. He thinks that the inconsistent hasn't been taken seriously enough in Western philosophy, that the masterpieces of Reutersvärd rub our noses in the inconsistent, and that Western philosophy and Buddhism are complementary. He's the author of Inconsistent Mathematics (1995) and Inconsistent Geometry (2010). Firstly, what made you get into philosophy? Fun Kids Online Math Games "Sheppard offers everything from early math to pre-algebra. The lessons include interactive activities to practice concepts. Students can shoot fruit, pop balloons, and even play math man (the math version of pac man!). Fractions, place value, money, and basic operations are some of the areas that are covered.

Einstein for Everyone Einstein for Everyone Nullarbor Press 2007revisions 2008, 2010, 2011, 2012, 2013 Copyright 2007, 2008, 2010, 2011, 2012, 2013 John D. Jeremy Howard: The wonderful and terrifying implications of computers that can learn What happens when we teach a computer how to learn? Technologist Jeremy Howard shares some surprising new developments in the fast-moving field of deep learning, a technique that can give computers the ability to learn Chinese, or to recognize objects in photos, or to help think through a medical diagnosis. (One deep learning tool, after watching hours of YouTube, taught itself the concept of “cats.”) Get caught up on a field that will change the way the computers around you behave … sooner than you probably think. This talk was presented to a local audience at TEDxBrussels, an independent event.

Dot Product Basics Dot Product Basics Dot Product of Two Vectors The dot product of two vectors A and B is a key operation in using vectors in geometry. Unhappy Truckers and Other Algorithmic Problems - Issue 3: In Transit When Bob Santilli, a senior project manager at UPS, was invited in 2009 to his daughter’s fifth grade class on Career Day, he struggled with how to describe exactly what he did for a living. Eventually, he decided he would show the class a travel optimization problem of the kind he worked on, and impress them with how fun and complex it was. The challenge was to choose the most efficient route among six different stops, in a typical suburban-errands itinerary. The class devised their respective routes, then began picking them over. But one girl thought past the question of efficiency. “She says, my mom would never go to the store and buy perishable things—she didn’t use the word perishable, I did—and leave it in the car the whole day at work,” Santilli tells me.

100 Incredible Lectures from the World's Top Scientists Posted on Thursday June 18, 2009 by Staff Writers By Sarah Russel Unless you’re enrolled at one of the best online colleges or are an elite member of the science and engineering inner circle, you’re probably left out of most of the exciting research explored by the world’s greatest scientists. David Epstein: Are athletes really getting faster, better, stronger? When you look at sporting achievements over the last decades, it seems like humans have gotten faster, better and stronger in nearly every way. Yet as David Epstein points out in this delightfully counter-intuitive talk, we might want to lay off the self-congratulation. Many factors are at play in shattering athletic records, and the development of our natural talents is just one of them. This talk was presented at an official TED conference, and was featured by our editors on the home page.