The taste of music. Ventromedial prefrontal cortex, adding value to autobiographical memories. Ventromedial Prefrontal Cortex Encodes Emotional Value. Fuzziness of Self, Handbook of Self-enhancement and Self-protection. Role of the hippocampus and orbitofrontal cortex during the disambiguation of social cues in working memory.

The neurobiology of decision: consensus and controversy. Perspektivenwechsel. Episodic memory and self-reference via semantic autobiographical memory: insights from an fMRI study in younger and older adults.

Self Reference Effect, Activation mPFC, Memory Boosting compared to general semantic knowledge. Source Retrieval and feature binding more difficult for older adults. Free recall engaging original encoding situation. The more participants (regardless of their age) activated mPFC and visual areas at encoding, the better their subsequent episodic source memory performance. SRE on subsequent recognition was associated with greater activity in the MPFC during the encoding phase. Activity of the mPFC in the SRE is preserved in healthy aging. Relationship between mental imagery and recollection: age-related increase in the activity of posterior brain regions when recalling autobiographical memories. Impairment in mental imagery in older adults is supported by behavioral studies that reveal a decline in the generation, maintenance, and manipulation of mental images. Specific aspects of self-referential processes (MPFC) may not be salient enough in aging, requiring over-recruitment of other structures to promote the SRE on source memory accuracy. Idea of an age-related functional reorganization in the neural networks underlying self-related long-term memory of new items. Self-referencing task more difficult than just making judgments about self-traits. – weihler 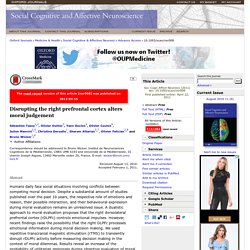 Researchers are beginning to decipher what exactly happens in our brains when we are making decisions. 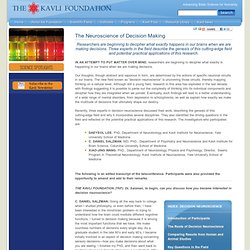 Three experts in the field describe the genesis of this cutting-edge field and potential practical applications of this research. IN AN ATTEMPT TO PUT MATTER OVER MIND, researchers are beginning to decipher what exactly is happening in our brains when we are making decisions. Our thoughts, though abstract and vaporous in form, are determined by the actions of specific neuronal circuits in our brains. The new field known as “decision neuroscience” is uncovering those circuits, thereby mapping thinking on a cellular level. The Rule of Expectations. Chapter 10 - Westside Toastmasters is located in Los Angeles and Santa Monica, California Overview If I accept you as you are, I will make you worse; however if I treat you as though you are what you are capable of becoming, I help you become that. 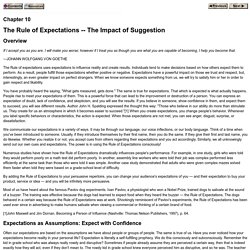 The Rule of expectations uses expectations to influence reality and create results. Individuals tend to make decisions based on how others expect them to perform. As a result, people fulfill those expectations whether positive or negative. You have probably heard the saying, "What gets measured, gets done. " We communicate our expectations in a variety of ways. Cognitive Psychology, Anderson.

Already managed the introduction and the chapter reasoning. – weihler 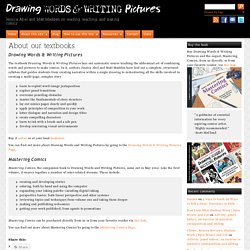 In it, authors Jessica Abel and Matt Madden have laid out a complete, structured syllabus that guides students from creating narrative within a single drawing to orchestrating all the skills involved in creating a multi-page, complex story. learn to exploit word-image juxtapositionexplore panel transitionsovercome penciling obstaclesmaster the fundamentals of story structurelay out comics pages clearly and quicklyapply principles of composition to your workletter dialogue and narration and design titlescreate compelling characterslearn to ink with a brush and a nib pendevelop convincing visual environments Buy it online or at your local bookstore. 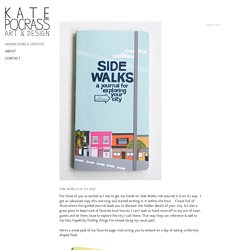 For those of you as excited as I was to get my hands on Side Walks, rest assured it is on it's way. I got an advanced copy this morning and started writing in it within the hour. Chock-full of illustrations this guided journal leads you to discover the hidden details of your city. Positive Psychology: The Scientific and Practical Explorations of Human ... - C. R. Snyder, Shane J. Lopez, Jennifer Teramoto Pedrotti.

My latest Literature. This body of research aims to contribute positive strategies to the studies of the human mind. They provide precious data about individual well-being in the context of various personal, social and cultural constellations. The rare longitudinal studies of the last decades give good hints for further investigation and development. Helpful not only for the development of personal and social strategies but also for overcoming disaster. Not yet finished with it. Sometimes it takes time to reflect the data from other perspectives. – weihler 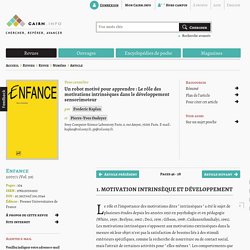 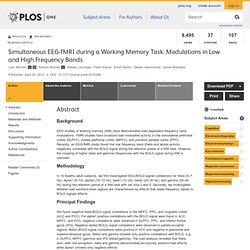 FMRI studies have localized load modulated activity to the dorsolateral prefrontal cortex (DLPFC), medial prefrontal cortex (MPFC), and posterior parietal cortex (PPC). Recently, an EEG-fMRI study found that low frequency band (theta and alpha) activity negatively correlated with the BOLD signal during the retention phase of a WM task. How does the brain handle long-term stress? People differ enormously as to what they consider to be stressful and how they respond to it. 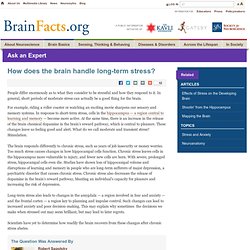 In general, short periods of moderate stress can actually be a good thing for the brain. For example, riding a roller coaster or watching an exciting movie sharpens our sensory and memory systems. In response to short-term stress, cells in the hippocampus — a region central to learning and memory — become more active. At the same time, there is an increase in the release of the brain chemical dopamine in the brain’s reward pathway, which is central to pleasure. These changes leave us feeling good and alert. The brain responds differently to chronic stress, such as years of job insecurity or money worries. Long-term stress also leads to changes in the amygdala — a region involved in fear and anxiety — and the frontal cortex — a region key to planning and impulse control. Scientists have yet to determine how readily the brain recovers from these changes after chronic stress abates. Prefrontal cortex and Self-Control. Self-Control is Quite Useful I was proof reading a document recently and part way through I had a “stuff this!” 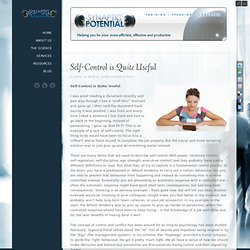 Neural Correlates of Appetite and Hunger-Related Evaluative Judgments. How much we desire a meal depends on both the constituent foods and how hungry we are, though not every meal becomes more desirable with increasing hunger. 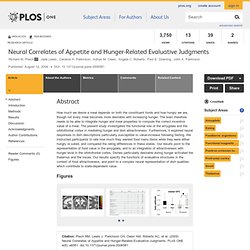 The brain therefore needs to be able to integrate hunger and meal properties to compute the correct incentive value of a meal. Thinking Strategically. Every week, Time and Newsweek compete to have the more eye-catching cover story. A dramatic or interesting cover will attract the attention of potential buyers at newsstands. Thus every week the editors of Time meet behind closed doors to select their cover story. Science reveals the power of a handshake. New neuroscience research is confirming an old adage about the power of a handshake: strangers do form a better impression of those who proffer their hand in greeting.

fMRI results showed "increased sensitivity to approach than to avoidance behavior in amygdala and superior temporal sulcus, which were linked to a positive evaluation of approach behavior and a positive impact of handshake." In addition, the researchers wrote, the "nucleus accumbens, which is a reward processing region, showed greater activity for Handshake than for No-handshake conditions. – weihler

That was my feeling about the triadic model. The amygdala avoidance probably depends on its wiring. The oder people get, the more negative impressions they collect, they can't or don't proceed properly, maybe thats why amygdala avoids with increasing age. Not the best conditions. Might be wrong, just my thoughts about it. Not considered problematic childhood. They probably "probably" avoid stronger and earlier moderately expressed. – weihler

A firm, friendly handshake has long been recommended in the business world as a way to make a good first impression, and the greeting is thought to date to ancient times as a way of showing a stranger you had no weapons. Now, a paper published online and for the December print issue of the Journal of Cognitive Neuroscience on a study of the neural correlates of a handshake is giving insight into just how important the practice is to the evaluations we make of subsequent social interactions.