Strategy vs Tactic. A strategy is a larger, overall plan that can comprise several tactics, which are smaller, focused, less impactful plans that are part of the overall plan. 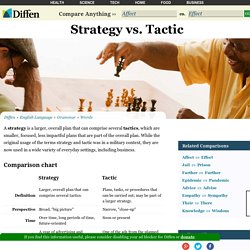 While the original usage of the terms strategy and tactic was in a military context, they are now used in a wide variety of everyday settings, including business. edit Strategy vs. Tactic in Business The usage of the words strategy and tactic in business is also derived from the original military context. Tactic (method) A tactic (from the Ancient Greek τακτική taktike meaning "art of arrangement") is a conceptual action implemented as one or more specific tasks. 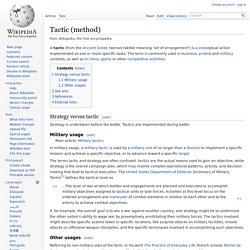 The term is commonly used in business, protest and military contexts, as well as in chess, sports or other competitive activities. Strategy is undertaken before the battle. Tactics are implemented during battle. The terms tactic and strategy are often confused: tactics are the actual means used to gain an objective, while strategy is the overall campaign plan, which may involve complex operational patterns, activity, and decision-making that lead to tactical execution. The United States Department of Defense Dictionary of Military Terms[1] defines the tactical level as If, for example, the overall goal is to win a war against another country, one strategy might be to undermine the other nation's ability to wage war by preemptively annihilating their military forces. 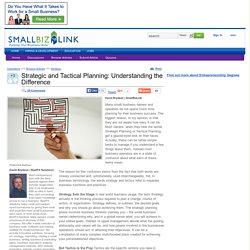 Schools taught them only to be employees. With an idea in hand, they start out lacking even basic knowledge of how to run a business. Many small business owners and operators do not spend much time planning for their business success. The reason for this confusion stems from the fact that both words are closely connected and, unfortunately, used interchangeably. Strategy Sets the Stage In real world business usage, the term Strategy actually is the thinking process required to plan a change, course of action, or organization. But Tactics Is the Play Tactics are the specific actions you take in implementing your strategy. Strategic Planning Process To understand the differences better, here are some notable points to consider, with respect to strategic planning. In addition, you need to establish a realistic baseline or starting point.

Mission vs. Goals vs. Objectives vs. Strategy vs. Executions vs. Tactics. At a recent internal agency meeting, there was a lot of discussion/confusion about terminology that we use in our business every day…. specifically the differences in definition of mission, goals, objectives, strategy, execution and tactics. 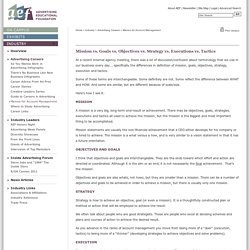 Some of these terms are interchangeable. Some definitely are not. Some reflect the difference between WHAT and HOW. And some are similar, but are different because of scale/size. Here’s how I see it: A mission is a very big, long-term end-result or achievement. Mission statements are usually the non-financial achievement that a CEO either develops for his company or is hired to achieve. I think that objectives and goals are interchangeable. 5 Major Differences Between Tactical and Strategic Intelligence.

Quora. Strategy vs Tactic. The Difference between Strategy and Tactics. The purpose of this post is to clearly delineate the distinct differences between strategy and tactics, and show how they work in tandem for your organization. 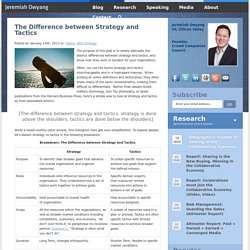 Often, we use the terms strategy and tactics interchangeably and in a haphazard manner. When probing at online definitions and dictionaries, they often share many of the same characteristics, making them difficult to differentiate. Rather than debate Greek military etymology, Sun Tzu philosophy, or latest publications from the Harvard Business Press, here’s a simple way to look at strategy and tactics by their associated actions: While a tweet-worthy catch phrase, this metaphor risks glib over-simplification.

To explore deeper, let’s dissect strategy vs tactics in the following breakdown: Breakdown: The Difference between Strategy and Tactics Strategy and Tactics Must Work in Tandem These two must work in tandem, without it your organization cannot efficiently achieve goals. Strategic Planning: Strategy vs. Tactics. Quite often, people confuse strategy and tactics and think the two terms are interchangeable in strategic planning, but they’re not. 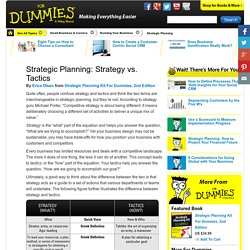 According to strategy guru Michael Porter, “Competitive strategy is about being different. It means deliberately choosing a different set of activities to deliver a unique mix of value.” Strategy is the “what” part of the equation and helps you answer the question, “What are we trying to accomplish?” Yet your business design may not be sustainable; you may have trade-offs for how you position your business with customers and competitors. Every business has limited resources and deals with a competitive landscape.

Ultimately, a good way to think about the difference between the two is that strategy acts as a guide to a set of actions that various departments or teams will undertake. Keep this thought in mind: What you’re not going to do is sometimes just as important as what you are going to do. Welcome to Forbes.