No 'A' for Effort. Writing for Salon, Brian Beutler speculated that if President Obama was lying about whether people could keep their current insurance plans under Obamacare, it was a “noble lie.” 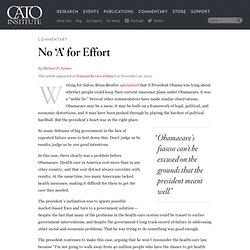 Several other commentators have made similar observations. George Will: Slouching toward disability. Beginning two decades after the death of Franklin Roosevelt, who would find today’s government unrecognizable, government became a geyser of entitlements. 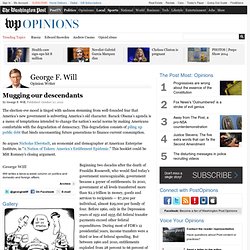 In 2010, government at all levels transferred more than $2.2 trillion in money, goods and services to recipients — $7,200 per individual, almost $29,000 per family of four. Before 1960, only in the Depression years of 1931 and 1935 did federal transfer payments exceed other federal expenditures. During most of FDR’s 12 presidential years, income transfers were a third or less of federal spending. But between 1960 and 2010, entitlements exploded from 28 percent to 66 percent of federal spending.

By 2010, more than 34 percent of households were receiving means-tested benefits. “The growth of entitlement spending over the past half-century has been distinctly greater under Republican administrations than Democratic ones. Don’t Resent the Rich; Fix the Tax Code (Part 3): Robert Shiller. We have ample reason to believe that financial markets are quite useful. 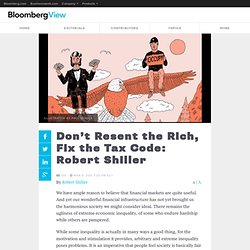 And yet our wonderful financial infrastructure has not yet brought us the harmonious society we might consider ideal. There remains the ugliness of extreme economic inequality, of some who endure hardship while others are pampered. While some inequality is actually in many ways a good thing, for the motivation and stimulation it provides, arbitrary and extreme inequality poses problems. Tax System Seen as Unfair, in Need of Overhaul. Wealthy Not Paying Fair Share Top Complaint Overview Public dissatisfaction with the tax system has grown over the past decade, and the focus of the public’s frustration is not how much they themselves pay, but rather the impression that wealthy people are not paying their fair share. 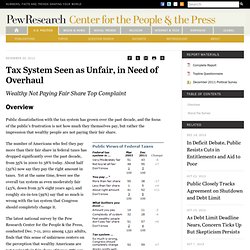 The number of Americans who feel they pay more than their fair share in federal taxes has dropped significantly over the past decade, from 55% in 2000 to 38% today. About half (52%) now say they pay the right amount in taxes. Yet at the same time, fewer see the overall tax system as even moderately fair (43%, down from 51% eight years ago), and roughly six-in-ten (59%) say that so much is wrong with the tax system that Congress should completely change it.

Republicans and Democrats agree on the need for tax reform; majorities across party lines see the system as unfair and in need of a complete overhaul. Points of Partisan Agreement, Division Household Income and Views of Taxes Fewer Feel Overtaxed. Short_ResearchSPM2010.

Is U.S. Upward Economic Mobility Impaired? What’s the most important issue in American politics? In a narrow sense, the sputtering economy and ballooning deficits are likely to dominate the 2012 election season. But while every election has its own particular concerns, fundamentally it is to the American Dream that our politicians must tend — that libertarian and egalitarian bundle of values and hopes that transcend our partisan, economic, and social divisions.

When the Pew Economic Mobility Project (EMP) surveyed people about what the American Dream meant, it got widely ranging answers.[1] Indiana’s governor, Mitch Daniels, recently hit on a common sentiment when he observed that “upward mobility from the bottom is the crux of the American promise.”

Angry about inequality? Don’t blame the rich. But the mere existence of income inequality tells us little about what, if anything, should be done about it. 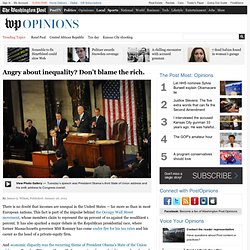 First, we must answer some key questions. Tax reforms. US welfare. Charles Murray on the New American Divide. What nation has the most progressive tax system? Economics for public policy. Economic Mobility Project. The Pew Charitable Trusts is driven by the power of knowledge to solve today's most challenging problems. 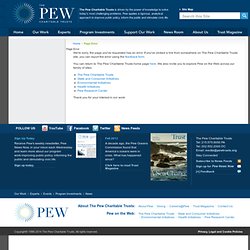 Pew applies a rigorous, analytical approach to improve public policy, inform the public and stimulate civic life. Ronald McKinnon: The Conservative Case for a Wealth Tax. Edmund Phelps Home Page. Edmund Phelps was born in 1933 in , , spent his childhood in Chicago and, from age six, grew up in Hastings-on-Hudson, N.Y. 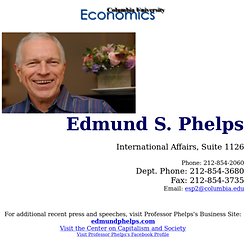 He earned his B.A. from Amherst in 1955 and his Ph.D. from Yale in 1959. He is McVickar Professor of Political Economy at Columbia University, Director of Columbia’s Center on Capitalism and Society. Income Distribution. Did the Poor Cause the Crisis? - Simon Johnson. Exit from comment view mode. 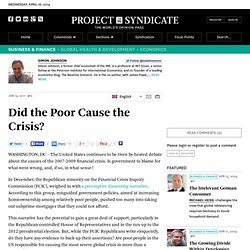 Click to hide this space WASHINGTON, DC – The United States continues to be riven by heated debate about the causes of the 2007-2009 financial crisis. The Undeserving One Percent? - Raghuram Rajan. Exit from comment view mode. 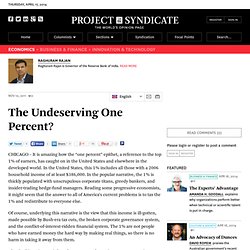 Click to hide this space CHICAGO – It is amazing how the “one percent” epithet, a reference to the top 1% of earners, has caught on in the United States and elsewhere in the developed world. In the United States, this 1% includes all those with a 2006 household income of at least $386,000.