Factory Farming and the Environment. With over nine billion animals raised and slaughtered for human consumption each year in the U.S. alone, modern animal agriculture puts an incredible strain on natural resources like land, water, and fossil fuel. 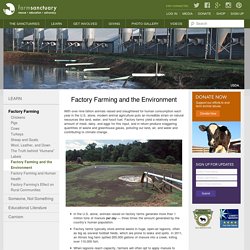 Factory farms yield a relatively small amount of meat, dairy, and eggs for this input, and in return produce staggering quantities of waste and greenhouse gases, polluting our land, air, and water and contributing to climate change. In the U.S. alone, animals raised on factory farms generate more than 1 million tons of manure per day — three times the amount generated by the country’s human population.Factory farms typically store animal waste in huge, open-air lagoons, often as big as several football fields, which are prone to leaks and spills.

The demand for livestock pasture is a major driver of deforestation. 5 Ways Factory Farming is Killing the Environment. New Report Condemns Factory Farming. PUBLISHED ON: 29 April 2008 These were the findings of a recent report by the prestigious PEW Commission on Industrial Farm Animal Production. 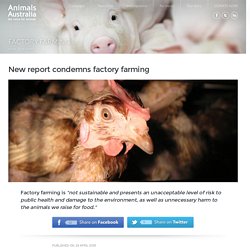 The report was based on a two and a half year review of animal agriculture in the US and included amongst the Commission's members Kansas governor, John Carlin, who chaired the committee; as well as former US Secretary of Agriculture, Dan Glickman, and former Dean of the University of Tennessee's College of Veterinary Medicine, Dr Michael Blackwell. This report's significance is emphasised by the fact that all fifteen Commission members were in unanimous agreement on the findings of the report.

The panel agreed that present factory farming systems designed to confine animals to cramped spaces were cruel and recommended that these systems be phased out. Us and the planet. The UN Food and Agriculture Organization has identified the livestock industry as one of the most significant contributors to today's most serious environmental problems.1 Find out why they — and you — have such cause for concern! 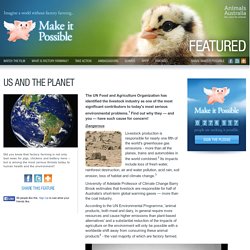 Dangerous Livestock production is responsible for nearly one fifth of the world's greenhouse gas emissions - more than all the planes, trains and automobiles in the world combined.2 Its impacts include loss of fresh water, rainforest destruction, air and water pollution, acid rain, soil erosion, loss of habitat and climate change.3 University of Adelaide Professor of Climate Change Barry Brook estimates that livestock are responsible for half of Australia's short-term global warming gases — more than the coal industry. 11 Facts About Factory Farms and the Environment. Good Shepherd Poultry Ranch. Good animal husbandry always revolves around the animals’ well being, and implies both the farmer’s responsibility to care for his animals and the consumers’ concern for welfare when selecting a product. 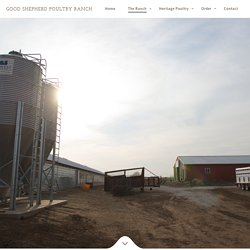 Poultry have been domesticated to the point that they must rely on human caretakers; therefore they are under our responsibility of ethical stewardship. Good Shepherd is dedicated to bringing American Poultry Association Standard Bred poultry back from the brink of extinction and restoring their presence on the family farm. Without our efforts, these birds will become simply a memory. Intensive & Extensive Agriculture. Intensive agriculture System of cultivation using large amounts of labour and capital relative to land area. 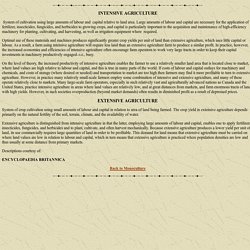 Large amounts of labour and capital are necessary for the application of fertilizer, insecticides, fungicides, and herbicides to growing crops, and capital is particularly important to the acquisition and maintenance of high-efficiency machinery for planting, cultivating, and harvesting, as well as irrigation equipment where required. Optimal use of these materials and machines produces significantly greater crop yields per unit of land than extensive agriculture, which uses little capital or labour. As a result, a farm using intensive agriculture will require less land than an extensive agriculture farm to produce a similar profit. In practice, however, the increased economies and efficiencies of intensive agriculture often encourage farm operators to work very large tracts in order to keep their capital investments in machinery productively engaged--i.e., busy. 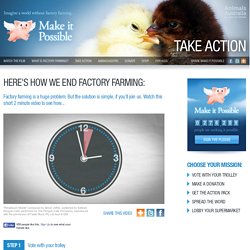 But the solution is simple, if you'll join us. Watch this short 2 minute video to see how... "Perpetuum Mobile" composed by Simon Jeffes, published by Editions Penguin Café, performed by The Penguin Cafe Orchestra, reproduced with the permission of Fable Music Pty Ltd Aust & EMI Share this video. Animals Australia under the microscope - Landline - ABC. PIP COURTNEY, PRESENTER: Farm lobby groups certainly think they had a big win recently when they pressured Coles and Animals Australia into dropping an in-store shopping bag promotion on animal welfare. 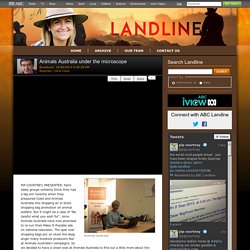 But it might be a case of "Be careful what you wish for", since Animals Australia have now promised to re-run their Make It Possible ads on national television. The spat over shopping bags put on show the deep anger many livestock producers feel at Animals Australia's campaigns. So we decided to have a closer look at Animals Australia to find out a little more about the group. Here's Chris Clark. ANIMALS AUSTRALIA ADVERTISEMENT (female voiceover): When you wake up in the morning, what's the first thing you see? CHRIS CLARK, REPORTER: This is the face of Animals Australia most of us know. CHRIS CLARK: It's the organisation behind campaigns on everything from pork to cage eggs and live cattle exports. The organisation's public face is their campaign director, Lyn White. What are the advantages and disadvantages of free range livestock production. 5 Shocking and Cruel Practices That are Allowed at ‘Certified Humane’ Chicken Farms.

Whole Foods is in hot water. 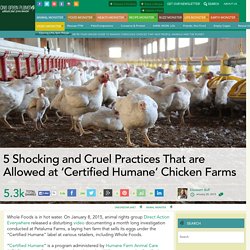 On January 8, 2015, animal rights group Direct Action Everywhere released a disturbing video documenting a month long investigation conducted at Petaluma Farms, a laying hen farm that sells its eggs under the “Certified Humane” label at various retailers, including Whole Foods. “Certified Humane” is a program administered by Humane Farm Animal Care (HFAC), a nonprofit organization that claims that “When you see the Certified Humane Raised and Handled label on a product you can be assured that the food products have come from facilities that meet precise, objective standards for farm animal treatment.” Under this program, farmers apply for certification and then HFAC employees inspect their farms. If a farm meets the “Certified Humane” standards, farmers pay a yearly fee in order to be certified and are then allowed to use the coveted “Certified Humane” label on their products. 1. 2. 3. 10 Cruel Things Done to Farm Animals That No Sane Person Would Do to a Cat or Dog.

Some people find it incredibly difficult to understand why the common farming practices carried out on pigs, chickens, cows, geese, goats, and sheep are so cruel and inhumane. 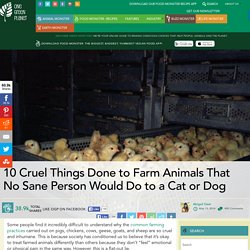 This is because society has conditioned us to believe that it’s okay to treat farmed animals differently than others because they don’t “feel” emotional or physical pain in the same way. However, this is a flat-out lie. When you spend time with these animals, you quickly understand that they are every bit as complex as any other animal on the planet, including our cats and dogs. Here’s a simple way to understand and to teach others that the way we treat farmed animals is not ethical or acceptable. Read through the list of common practices which farm animals have to endure every single day around the globe, and ask yourself whether you would pay someone to do this to your cat or dog. 1. 2. 3.

10 Ways You Can Fight Factory Farms. Ethical Farms.org Cruelty Free Farm Resource List. Compassionate Living. How would you feel if you were forced to wear clothes chosen by your mother ... for your entire life? 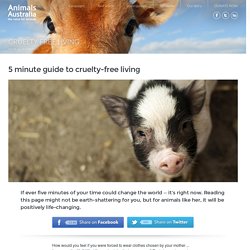 What if you also inherited your career? Taste in music, movies and books? Your political views? Not sounding likely? Personal choice helps define us. Eating animals is not something most of us ever consciously chose to do. Every day, more people start to question this situation. Mother cows form strong bonds with their calves. At the supermarket The humble act of grocery shopping is our most powerful opportunity to vote against animal cruelty. Factory farms still exist because unwitting shoppers purchase their products. Pigs are known to have the cognitive capacity of a 3 year old child. Think twice about eggs. Mother hens protect their chicks by enveloping them in their wings Entertainment Pick a family outing that's kind to animals. Protecting wildlife. Make it Possible - Imagine a world without factory farming.

In factory farms, sensitive, intelligent animals are treated like mere production units, rather than thinking, feeling beings. In order to produce eggs and meat, factory-farmed animals endure physical pain, stress, fear, loneliness and chronic boredom. This would normally be a textbook cruelty offence, but factory farm operators have been given exemptions from animal cruelty laws in order to conduct their business lawfully. This is legalised animal cruelty. How to see through chicken industry spin - take the quiz. An investigation into one of Australia's largest chicken meat producers that supplies major retail outlets has revealed routine and shocking animal abuse. Every year in Australia 435 million chickens endure brutally short and undeniably cruel lives inside factory farms. Animals Australia's investigation video shows baby birds suffering from heart disease, lameness, thirst, starvation and trampling inside a shed packed with over 40,000 birds.

Threatened by rising concern for the welfare of animals, Australia’s major chicken producers are attempting to mislead consumers with confusing terms such as ‘cage free’ and ‘free to roam’ — despite the fact that cages are never used in broiler facilities. The reality is that nearly all chicken meat sold by major brands is factory farmed. Factory Farming. Factory farming causes the most suffering to the largest number of animals in Australia – almost 700 million sentient beings every year. What is a factory farm? Today, very few animals roam freely on traditional farms. Most animals suffer behind the closed doors of large industrial facilities known as factory farms. On factory farms animals are kept in a state of permanent confinement, crammed together in cages or sheds for the entire duration of their short lives.

Producers also use a variety of artificial methods to increase production, such as the constant administration of antibiotics, the use of artificial lighting and selective breeding. The purpose of intensive farming is simply to produce the most meat, eggs and dairy at the lowest possible cost. Animal farming is big business Over the past fifty years, meat consumption has increased steeply while the number of meat producers has significantly reduced.