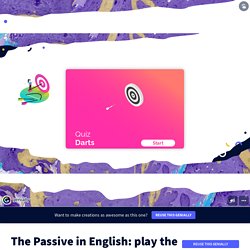 Written writed wrote The text was ....... by me. broken breaked broke The window was ... by Bob. damaged taken flown My car was .... by an accident. given fed made The key was ..... to my sister. found ordered left Gold was .... in California. answered sold entered. The Passive form. The iPod. Mr. D. Presents: Mr. Passive Voice. Passive voice lesson - English grammar tutorial video lesson. How to Teach the Passive Voice – While Being Active! LearnEnglish Teens. We use the passive, rather than the active, to show that we are more interested in a certain part of the sentence. 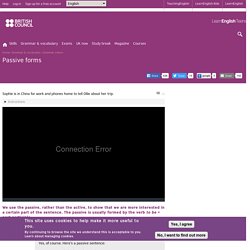 The passive is usually formed by the verb to be + past participle. Can you give me some examples of the active and passive? Yes, of course. Here’s a passive sentence: My room is being cleaned. 'My room' is the main focus of the sentence. OK, that makes sense. We also use the passive when we don’t know who did something, or when it isn’t important. It’s the biggest outdoor elevator in the world, so I’ve been informed. It doesn’t matter who told me. I think loads of films have been made there.

The important thing is the films, not the film-makers. Can you use a passive and also say who did the action? Yes. Avatar was made by James Cameron. No, not necessarily. I hope to find everything clean and tidy … you’ve been warned! But we often avoid the passive in very informal spoken language, for example, by using they. They based the scenery in Avatar on the landscape here. Yes, very good! Passives. Passives We make the passive using ‘be’ – in a suitable tense – and the past participle (‘done’, ‘played’ etc.). 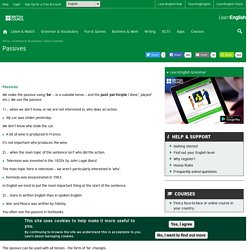 We use the passive: 1) … when we don’t know, or we are not interested in, who does an action. My car was stolen yesterday. We don’t know who stole the car. A lot of wine is produced in France. It’s not important who produces the wine. 2) … when the main topic of the sentence isn’t who did the action. Television was invented in the 1920s by John Logie Baird. The main topic here is television – we aren’t particularly interested in ‘who’. Kennedy was assassinated in 1963. In English we tend to put the most important thing at the start of the sentence. 3) … more in written English than in spoken English. War and Peace was written by Tolstoy. You often see the passive in textbooks.

The mixture is heated to 500˚C. Active / Passive Verb Forms. Sentences can be active or passive. 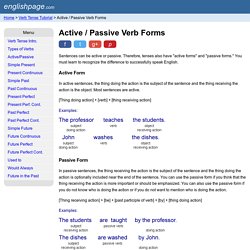 Therefore, tenses also have "active forms" and "passive forms. " You must learn to recognize the difference to successfully speak English. Active Form. Passive voice exercises - elementary and intermediate level esl. Passive Exercises. Passive Exercises Here's a list of exercises for practice with the passive: Would you like more Perfect English Grammar? 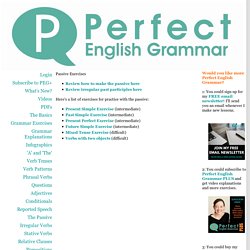 1: You could sign up for my FREE email newsletter! I'll send you an email whenever I make new lessons. Present simple - Passive Voice - Missing word. THE PASSIVE VOICE. Passive snap.