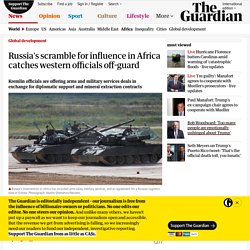 The most recent – an agreement for a planned Russian logistics base in Eritrea, which would give it access to the Red Sea – was announced in early September after nine months that have seen Kremlin officials crisscross from the Horn to the Great Lakes and southern Africa. The pace of Russia’s renewed intervention has raised fears over the human rights and security implications of selling arms to regimes that are weak or in conflict, particularly as the US has signalled its own plans to withdraw troops and close missions.

Scrutiny was heightened last month following the murder of three Russian journalists in Central African Republic while they were investigating the activities of the controversial Russian military services firm Wagner. “The difference is that now it is not as clear cut. America is Being Hit on the Head by BRICS. As the 2016 United States (US) presidential race heats up, it looks as though foreign policy will attract more of the limelight than usual. 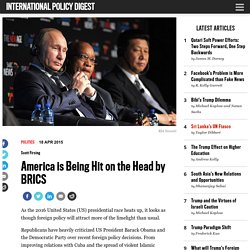 Republicans have heavily criticized US President Barack Obama and the Democratic Party over recent foreign policy decisions. From improving relations with Cuba and the spread of violent Islamic extremism in the Middle East and Africa to the nuclear ‘deal’ with Iran and Russia’s antics in Ukraine, Republicans have been quick to oppose actions taken by the US president. This is worrisome to many Americans because like Rocky Balboa in his fight against the Russian Ivan Drago in the classic movie Rocky IV, the US is taking a beating, with some bad news coming from the BRICS countries.

The BRICS have given South African president Jacob Zuma enough cover to criticize the major credit-ratings firms — Quartz. Johannesburg, South Africa It started off as a joke. 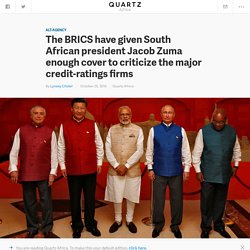 Comparing Donald Trump, with his campaign of divisiveness, accusations against the democratic system, and vengeful score keeping against his critics, to an African dictator was meant to demonstrate the absurdity of his candidacy. Now, he is the president-elect of the United States, leaving much of the world reeling in disbelief. Modi tour: Seven things about Africa and India. Image copyright AFP India's Prime Minister Narendra Modi is on an African charm offensive, visiting four nations where he hopes to tie up energy and trade deals and remind the continent of their cultural bond. 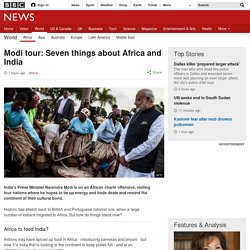 Historic ties stretch back to British and Portuguese colonial rule, when a large number of Indians migrated to Africa. China Investment in Africa. Nigeria-India trade hits $16 billion - Nigeria Today. (Fred Itua, ABUJA) The trade volume between the Federal Republic of Nigeria and India has hit $16 billion, the Indian High Commissioner-designate to Nigeria, B. 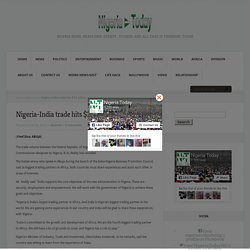 N. Reddy has revealed. The Indian envoy who spoke in Abuja during the launch of the India-Nigeria Business Promotion Council, said as biggest trading partners in Africa, both countries must share experiences and assist each other in areas of interests. CII Africa Conclave. Hamid Ansari offers Indian expertise to train Tunisians in IT and education. BRICS mutual trade up 70% in 6 yrs – South Africa president — RT Business. Trade between BRICS countries has increased 70 percent since the group was established in 2009, according to South African President Jacob Zuma. 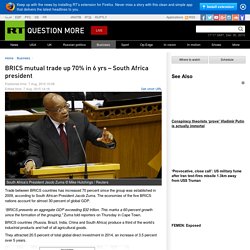 The economies of the five BRICS nations account for almost 30 percent of global GDP. “BRICS presents an aggregate GDP exceeding $32 trillion. This marks a 60-percent growth since the formation of the grouping," Zuma told reporters on Thursday in Cape Town. BRICS countries (Russia, Brazil, India, China and South Africa) produce a third of the world’s industrial products and half of all agricultural goods. They attracted 20.5 percent of total global direct investment in 2014, an increase of 3.5 percent over 5 years. 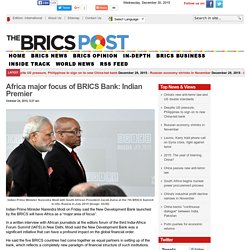 In a written interview with African journalists at the editors forum of the third India-Africa Forum Summit (IAFS) in New Delhi, Modi said the New Development Bank was a significant initiative that can have a profound impact on the global financial order. He said the five BRICS countries had come together as equal partners in setting up of the bank, which reflects a completely new paradigm of financial structure of such institutions. “The lending practices will be designed keeping the interests and experiences of the developing world in mind. Titled. Brazil, China, India, South Africa in push for climate financing.

New York (AFP) - Brazil, China, India and South Africa voiced disappointment Sunday over the failure of rich countries to come up with billions of dollars needed to help them sign on to a landmark climate change deal. 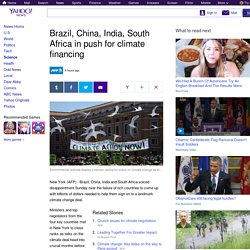 Ministers and top negotiators from the four key countries met in New York to close ranks as talks on the climate deal head into crucial months before a Paris conference in December. In a joint statement, they expressed "disappointment over the continued lack of any clear roadmap for developed countries to provide $100 billion per year by 2020, as well as on substantially scaling up financial support after 2020. " The world's developed countries agreed in 2010 to mobilize $100 billion a year by 2020 to help poorer nations adapt to the impacts of climate change and reduce their emissions. Those commitments have fallen short by about $70 billion, according to the World Bank.

Africa summit in India to counter China. Originally scheduled for last December, the India-Africa Forum was cancelled over fears on the Ebola virus China's decision to contribute troops to protect its commercial interests in Africa and committing to link nations in the dark continent with railway, road and regional aviation, has woken India up. 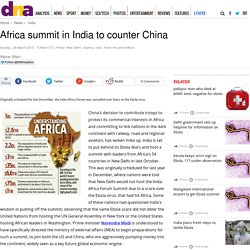 India is set to put behind its Ebola fears and host a summit with leaders from Africa's 54 countries in New Delhi in late October. This was originally scheduled for last year in December, where nations were told that New Delhi would not host the India-Africa Forum Summit due to a scare over the Ebola virus, that had hit Africa. Some of these nations had questioned India's wisdom in putting off the summit, observing that the same Ebola scare did not deter the United Nations from hosting the UN General Assembly in New York or the United States hosting African leaders in Washington.

Chinese financing model in Africa seen as an example in Brazil. Brazil plans to expand its exports to Africa beyond the Portuguese-speaking countries, where it is already well established, but needs a more attractive financing model, somewhat similar to China’s model, according to a recent Brazilian study. 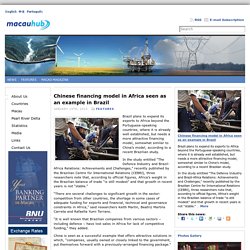 In the study entitled “The Defence Industry and Brazil-Africa Relations: Achievements and Challenges,” recently published by the Brazilian Centre for International Relations (CEBRI), three researchers note that, according to official figures, Africa’s weight in the Brazilian balance of trade “is still modest” and that growth in recent years is not “stable.” “There are several challenges to significant growth in the sector: competition from other countries, the shortage in some cases of adequate funding for exports and financial, technical and governance constraints in Africa,” said researchers Keith Martin, Beatriz Martins Carreta and Rafaella Yumi Terrano.

Related News: Africa-brics_cooperation_eng.pdf. Africa will trade mostly with partners from the South by 2020. Prior to the economic crisis, Africa's share of trade with other emerging markets was a mere 30%. Today that has gone up to nearer 50%, and by 2020, on current trends that could be as much as 70%. One of the themes at this year's African Development Forum, an ECA event, was new forms of partnership. The idea is to move away from development assistance and adapt to the realities of today. Global economic trends reflect the ongoing geopolitical and economic rebalancing in favour of developing and emerging economies, particularly Brazil, China and India, all of which call for stronger South-South partnerships. The Brics development bank can release Africa from World Bank tyranny. The leaders of the Brics countries – Brazil, Russia, India, China and South Africa – have signed a treaty in the Brazilian city of Fortaleza to launch a Brics development bank.

The bank will rival the US- and European-led World Bank and its private lending affiliate, the International Finance Corporation, which have dominated development finance since the second world war. The Brics bank is positioned as a financial institution that will provide developing countries with alternative funding minus the punishing strings attached to World Bank lending, which strip recipient countries of the power to make their own policies. It also promises to make lending processes for developing countries faster, simpler and cheaper. The Brics members will set up a $100bn contingency reserve pool (called the contingent reserve arrangement, or CRA), to help members who face sudden foreign capital flights. China will contribute $41bn, Russia, Brazil and India $18bn each, and South Africa $5bn. Les BRICS et l’Afrique : l’alliance se confirme ? - Dernières infos - Economie.

Les échanges commerciaux entre les BRICS et les pays africains estimés à 500 milliards de dollars dès 2015. BRICS corporate snapshots in Africa. Baruti Amisi 2014-04-09, Issue 673 Printer friendly version There are 2 comments on this article. cc IM The BRICS are united in their drive for foreign direct investment, a thirst for natural resources and poor environmental regulation. A closer examination of the predatory capitalist penetration of each BRIC nation reveals multi-national companies carving up Africa in a similar way the countries of the 1884 Berlin conference did to Africa. Africa-brics_cooperation_eng.pdf. US and China mull partnership for Inga 3 project in DR Congo. The Inga 3 dam has 11 dams and six hydropower projects on the Congo River in the African nation with a combined capacity of 40,000 MW.

(Image source: Covitha/Flickr) The US may partner with Chinese firms to finance the US$12bn Inga 3 dam project located in DR Congo, according to an NGO Peter Bosshard, policy director of US-based NGO International Rivers, said that US Agency for International Development (USAID) was keen on co-operating with Chinese firms to fund the Inga 3 project.

A USAID spokesperson said, “USAID continues to work with a wide range of partners to determine whether an Inga dam project would be financially, environmentally, socially, and politically viable. USAID continues to work to improve access to electricity in the Democratic Republic of Congo and sub-Saharan Africa.” The government will select a bidder by July 2014, sources said. Brics business leaders want formation of development bank to be accelerated. Brazil and Sub-Saharan Africa: Partnering for Growth. China and India: The scramble for business in Africa: Special Reports. G8 to invest 380 million US dollars in agriculture in Mozambique - Brazil 'to write off' almost $900m of African debt. Young Visionaries 1212.pdf. INDIAFRICA 1212.pdf.