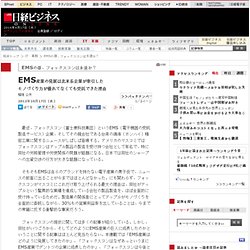 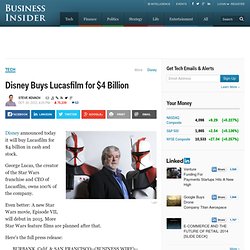 George Lucas, the creator of the Star Wars franchise and CEO of Lucasfilm, owns 100% of the company. Even better: A new Star Wars movie, Episode VII, will debut in 2015. More Star Wars feature films are planned after that. Here's the full press release: BURBANK, Calif. & SAN FRANCISCO--(BUSINESS WIRE)-- Continuing its strategy of delivering exceptional creative content to audiences around the world, The Walt Disney Company (NYSE:DIS) has agreed to acquire Lucasfilm Ltd. in a stock and cash transaction.

Under the terms of the agreement and based on the closing price of Disney stock on October 26, 2012, the transaction value is $4.05 billion, with Disney paying approximately half of the consideration in cash and issuing approximately 40 million shares at closing. Netflix loses the love. By Dan Mitchell, contributor FORTUNE -- The Netflix customers who dropped their subscriptions after a series of flubs by CEO Reed Hastings last summer were angry. 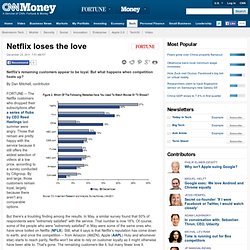 Those that remain are pretty happy with the service because it still offers the widest selection of videos at a low price, according to a survey conducted by Citigroup. By and large, those customers remain loyal, largely because there aren't any comparable options. California - Janet Novack. Data Bartering Is Everywhere.

Noam Bardin wanted to expand the reach of his company’s mobile mapping app to South America. 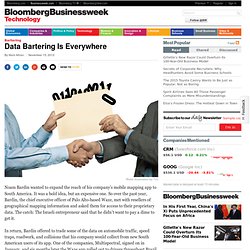 It was a bold idea, but an expensive one. So over the past year, Bardin, the chief executive officer of Palo Alto-based Waze, met with resellers of geographical mapping information and asked them for access to their proprietary data. The Hackers of Damascus. Taymour Karim didn’t crack under interrogation. 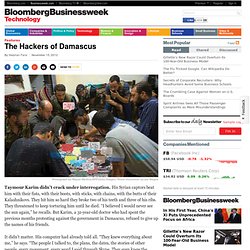 His Syrian captors beat him with their fists, with their boots, with sticks, with chains, with the butts of their Kalashnikovs. They hit him so hard they broke two of his teeth and three of his ribs. イオン:ネットスーパーの動向. The 25 Best Inventions of 2014. Google Alphabet: Making Sense of the Change. In a surprise announcement Monday, Google co-founder Larry Page said the company’s leaders are turning it into a subsidiary of a new holding company called “Alphabet.” 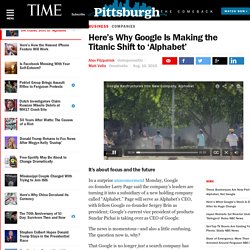 Page will serve as Alphabet’s CEO, with fellow Google co-founder Sergey Brin as president; Google’s current vice president of products Sundar Pichai is taking over as CEO of Google. The news is momentous—and also a little confusing. The question now is, why? That Google is no longer just a search company has been evident for a long while. Though its mission has always famously been to organize all the world’s information, the company has increasingly gotten into more and more disparate lines of business—when new ventures were businesses at all, that is. MORE: Read TIME’s 2013 cover story, ‘Google vs. When such ventures might actually turn a profit, however, has been a consistent, nagging question. What’s more, search and the ads sold against it, have come under increasing pressure. Are Subarus the best cars money can buy? By Alex Taylor III, senior editor-at-large FORTUNE -- By the usual measurements, Subaru should be no more than an afterthought in the U.S. car market. 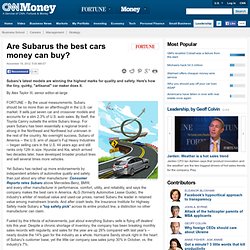 It sells just seven car and crossover models and accounts for a slim 2.3% of U.S. auto sales. By itself, the Toyota Camry outsells the entire Subaru lineup. For years Subaru has been essentially a regional brand -- strong in the Northeast and Northwest but unknown in the rest of the country. No overnight success, Subaru of America -- the U.S. arm of Japan's Fuji Heavy Industries -- began selling cars in the U.S. 44 years ago and still ranks only 12th in size.

100 Best Companies to Work For 2012: Full list - from FORTUNE. The Successful Startup That Said No to $10 Million In Cash. How Hewlett-Packard lost its way. By James Bandler with Doris Burke FORTUNE -- A few months after she took over as the CEO of Hewlett-Packard (HPQ) last September, Meg Whitman held one in a series of get-to-know-you meetings with employees. 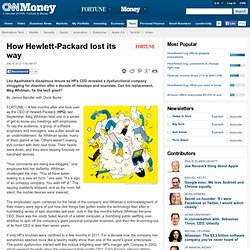 To say the audience, a group of software engineers and managers, was sullen would be an understatement. As Whitman spoke, many of them glared at her. Amazon's Jeff Bezos: The ultimate disrupter. By Adam Lashinsky, senior editor-at-large FORTUNE -- Jeff Bezos likes to read. 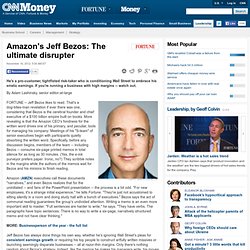 That's a dog-bites-man revelation if ever there was one, considering that Bezos is the cerebral founder and chief executive of a $100 billion empire built on books.