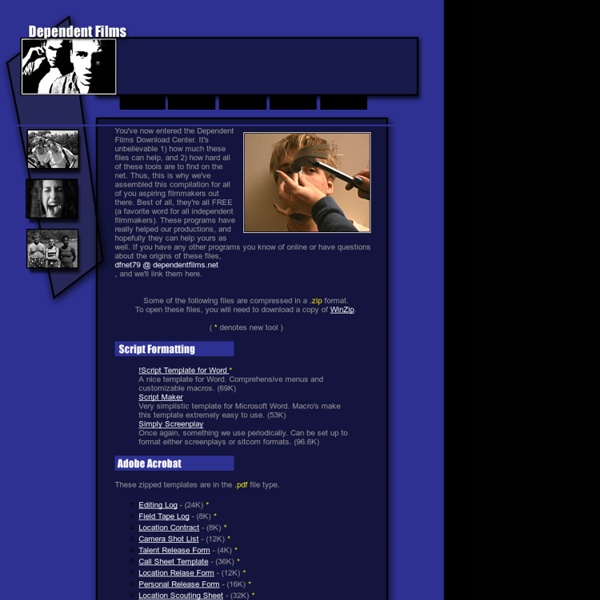 You've now entered the Dependent Films Download Center. It's unbelievable 1) how much these files can help, and 2) how hard all of these tools are to find on the net. Thus, this is why we've assembled this compilation for all of you aspiring filmmakers out there. Best of all, they're all FREE (a favorite word for all independent filmmakers). These programs have really helped our productions, and hopefully they can help yours as well. If you have any other programs you know of online or have questions about the origins of these files, dfnet79 @ dependentfilms.net, and we'll link them here. Some of the following files are compressed in a .zip format. ( * denotes new tool ) ! These zipped templates are in the .pdf file type. These templates are in the .xls file type.

Film Studies 101: The 30 Camera Shots Every Film Fan Needs To Know, Feature The cinematographer's art often seems as much black magic as technique, taking a few actors milling around a set and turning it into something cinematic, evocative and occasionally iconic. Amidst all the voodoo and mystery, however, there is concrete science behind those money shots so we've identified thirty of the most important camera shots to help you distinguish your dolly zooms from your Dutch tilts. Aerial Shot A Tripod-On-Skates Lets Amateurs Pull Off Hollywood-Quality Camera Moves What’s the difference between a compelling, immersive short film and a throwaway piece of sub-viral crap? Not video resolution: nowadays, when every cat-filming schmoe has an HD video camera in his smartphone and the DSLR revolution has unleashed a tsunami of bokeh onto Vimeo.com, you need more than sharp pictures and good lenses to make an impact. According to Justin Jensen, an engineer-cum-amateur photographer/filmmaker who studied Computational Photography at the MIT Media Lab, "I realized that video quality is no longer limited by resolution, but instead by stabilization." In other words, you need smooth camera movement to give your vids that juicy sheen of production value. But since Jensen couldn’t afford a SteadiCam, he invented CineSkates: a tiny, inexpensive, portable, expandable camera-movement platform based on Joby’s Gorillapod.

12 Video Sites That Are Better Than YouTube There’s little doubt that YouTube is the go-to video site for many people. In fact, it’s one of the most popular websites in the world. But what if YouTube happens to be inaccessible? Or you simply want more options for viewing videos online? What alternatives are there? These days, video is such a huge part of the online experience that there are many options available. labs: Storyboard Templates. . . Probably the most valuable couple of megabytes on this site, my storyboard templates have continuously been one of the top sources of traffic. For me, storyboarding is simultaneously the most rewarding and frustrating part of the film making process. It is very rare that a scripted scene survives the storyboarding step unscathed. While you really don’t need anything special to produce a great sequence of storyboard panels (choices range from the lowly diner napkin to the highest end Wacom Cintiq), we live in a world where people offer up all shorts of wonderful options and tools free of charge, and you would be silly not to take a look at them. I never found anything I really liked to draw my panels on so I put together some of my own a little while back.

How to Edit Like Kurosawa: An Analysis of the Final Battle in 'Seven Samurai' It has been said many, many times: Akira Kurosawa is a master filmmaker -- perhaps the master. However, what skill did the Master master? The general consensus leans toward Kurosawa's incredible ability to tell stories through editing, the techniques of which are analyzed in this video by Phil Baumhardt.

Indie Filmmaker Buying Guide: Top Camcorders From $2000 - $6000 These days, calling yourself a "budget" or "indie" filmmaker can mean a wide variety of things. Many indie film productions operate on multimillion dollar budgets, but many people who attempt to finance their own movies can only dream about having that kind of cash. It's true, lots of "budget" films are really "no-budget" films, and the list of movies made for less than $10,000 is growing every year. The time-travel flick Primer was reportedly made for less than $7000 shooting on film, while a documentary shot entirely on video can be completed for less than $1000. If you're budget is running on empty, we suggest you take a look at our list of Top Camcorders for Under $2000. That guide should help you find a suitable video camera for filmmaking without putting you into (too much) debt.

Writing the Dreaded Cover Letter I've written other posts about writing challenges connected to the job search: how writing anxiety can affect the job search and how writing samples add another layer of challenge to the job seeker. But of all the writing-related activities of the job search, the one task most universally hated is the cover letter. It seems to cause anxiety for many otherwise well-qualified job seekers. Storyboard Tutorial - How to Create Storyboard for Film, Video, and Television First a Quick Note to Aspiring Producers and Film Makers This tutorial is aimed at people who want to storyboard professionally. However it also useful for beginning television and film makers just wanting to know the basics.