9 Famous Movie Villains Who Were Right All Along 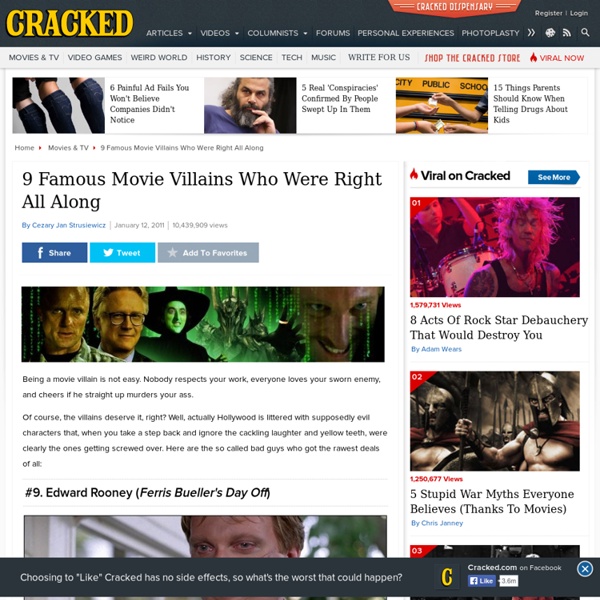 Being a movie villain is not easy. Nobody respects your work, everyone loves your sworn enemy, and cheers if he straight up murders your ass. Of course, the villains deserve it, right? Well, actually Hollywood is littered with supposedly evil characters that, when you take a step back and ignore the cackling laughter and yellow teeth, were clearly the ones getting screwed over. Here are the so called bad guys who got the rawest deals of all: #9. The "villain": Mr. Above: The eyes of an educator. Hold on a minute there: Let's get the obvious out of the way: this is his goddamned job. The movie glosses over the fact that Ferris couldn't read And you know what? And we're asked to sit back and say, "serves him right for caring about the future of our country!" Suddenly the recession makes sense. #8. The Night of Broken Glasses would end differently. If they require licenses for concealed handguns, they should probably keep this guy on file too. And what happens when he can't? #7. Simba: Wow... #6. Related:  Film & Cinema

6 Famous Characters You Didn't Know Were Shameless Rip-Offs Although the G.I. Joe action figures have existed since the 60s, it wasn't until 1982 that they gained personalities, an actual story and their very own nemesis; becoming the G.I. Joe we know and love. The enemy was of course Cobra, a snake themed terrorist organization with a soft spot in their dark hearts for secret fortresses, giant lasers and parachutes (safety first!). They are a Rip-Off of: Oh, and also: Cobra is what you get when two other snake themed terrorist groups, DC Comics's Kobra and Marvel's Hydra, get drunk one night and have awkward sex in the back of Kobra's dad's Honda Civic. Hydra was created in 1965, as an enemy organization of Nick Fury's S.H.I.E.L.D. while Kobra was created in 1976, and even were the stars of their own comic. When HASBRO decided to revive the G.I. Anything else besides all of them being snake themed ultra high-tech criminal organizations? And here is another odd one. We have to agree with Kobra here, Twinsy, you are just being an ass. Wait...

5 Reasons The Greatest Movie Villain Ever is a 'Good' Witch When you think of The Wizard of Oz's cast of villains, you most likely think of the flying monkeys and the Wicked Witch of the West, and maybe the pissy apple trees and the green dudes guarding the WWotW's castle. Also known as 'Winkies.' True story. If you've seen or read 'Wicked,' you might have a more sympathetic view of the Wicked Witch of the West. But 'Wicked' doesn't go far enough, since it ignores the fact that the movie features one of the most brilliantly conniving movie villains ever. It's her, right there. Glinda, not the Wicked Witch of the West, is the cause for everything that goes wrong for Dorothy and her new friends in the land of Oz, and she starts instigating the film's central conflict the second Dorothy shows up. You remember the story, right? And that's when Glinda the Good Witch floats down and merrily interrogates Dorothy to find out if she is a good witch or a bad witch. "And remember only bad people are disabled, Dorothy" You caught that, right? What?!

5 Ridiculous Gun Myths Everyone Believes (Thanks to Movies) Even in gun-crazy America, most of us aren't shooting things as part of our day-to-day routine. So most Americans actually know very little about guns. Hollywood writers realized this a long time ago and, being writers, used it as an excuse to never do any fact-checking ever again. Silencers Turn Gunfire Into a Gentle Whisper Where You've Seen It: In The Line Of Fire, Die Hard 2, No Country For Old Men, Shooter, practically every James Bond movie. The Myth: Cautious spies and assassins know that if you're going to take out a bad guy in an office or a library, be sure to use a silencer. Above: Stealth. Itty-bitty handguns aren't the only things you can silence. Also, while silencers look all slick and expensive and fancy, Hollywood says pretty much any long, hollow tube will do the job. The Problem: Exploding gunpowder is loud. If you can't watch the video, let us sum it up: It still sounds like a freaking handgun. So a silencer really just makes a large gun sound like a smaller gun.

6 Super Friends Villains That Didn't Give a @#%* Between Green Lantern, Superman, The Flash, and Batman, it was tough to picture any villain that could give the Super Friends trouble. Asking a cartoon writer to come up with a reasonable threat for them was a challenging, almost pointless endeavor. Understandably, this is why so many of them went insane. It's also why the Super Friends writers invented a technique many of us still use today: totally not giving a shit. And here are their villainous creations who gave the least. #6. In the '70s and '80s, you'd find most superheroes trapped in spider webs or flying toy airplanes because every villain they ever faced invented the shrink ray. Here's the plot: Gulliver and his unexplainedly intelligent cat Igor started shrinking the world's people, and when the Super Friends tried to stop him, he shrank them too. Oh, the other thing about the first season of Super Friends is that it was an hour long. #5. I don't think they did, actually. #4. "Wait a second, Batman.

7 Insane Easter Eggs Hidden in Movies and TV Shows We've already told you about some of the most mind-blowing Easter eggs hidden in music albums, classic works of art and video games, so it was just a matter of time before we explored our favorite Easter Eggs from the world of television and film. Captain, unleash the list. Hidden Faces and Naked Women in Movie Posters Most of us don't look twice at movie posters, short of muttering under our breath and saying, "Oh fuck, they're doing a sequel/remaking/rebooting that shit?" For example, check out the poster for the fourth Indiana Jones movie: Now take a really close look between the eyes of the skull and you can see this distinctly alien-looking figure: It's either an alien, or a pumpkin. Well ain't that something? If you look at the smoke in the lower right, you can kind of see half of a face. Either it's the film's monster, or it's the devil or some shit. But neither of those compare to the poster for The Silence of the Lambs. That's not a skull at all. Dali can make anything creepy.

The 5 Most Famous Musicians Who Are Thieving Bastards Every artist "steals" a little, whether they realize it or not. For instance, we talk about how some musician was "influenced" by music they grew up with, even if sometimes that influence consists of outright stealing and/or barely remixing a classic. That's just the way it works. But sometimes, it's even more blatant than that. In fact, some of the most successful musical acts in history based huge chunks of their careers entirely on plagiarism. Led Zeppelin are remembered for two things: banging a groupie with a mudshark and recording songs that rocked harder than any band had ever rocked before. Don't believe us? A young Jake Holmes played a song of the same name (and chords, and lyrics kind of) at a show in 1967 where he was opening for The Yardbirds, who featured--say it with us! But who cares, right? Gross. Too bad they jacked that shit too. How did nobody notice that? They never did. In hip-hop, there are two schools of thought when it comes to sampling. Dicks.

Carl Jung Psychoanalysis: Philosophy Metaphysics of The Undiscovered Self Quotes Carl Jung Psychoanalyst Philosophy of Psychoanalysis / Carl Jung (1875 - 1961) Discussion of Metaphysics / Philosophy of Famous Psychoanalyst Carl Jung's Undiscovered Self / Synchronicity. Carl Jung Pictures, Quotes / Quotations The contradiction, the paradoxical evaluation of humanity by man himself is in truth a matter for wonder ... in other words ...' What will the future bring? Introduction / Introductory Quotes How we behave as individuals in regard to our inner world is just as important and may even be more important than how we behave in regard to our outer world. If I accept the fact that a god is absolute and beyond all human experiences, he leaves me cold. Philosophy / Metaphysics of Carl Jung Our conscious mind is limited to the sequential flow of words and their corresponding ideas which arise from our subconscious. Below you will find some interesting (and wise) quotes from Carl Jung. Geoff Haselhurst, Email Carl Jung Undiscovered Self (1957) Quotes Carl G. Carl Jung Quotations Carl Jung Links

9 Traumatizing Moments from Classic Kids Movies Image Source: and Photoshop. Just because a movie is animated, it doesn't mean it's suitable for children. And apparently, just because a movie is marketed toward children, made by a studio associated with children and specifically designed with children in mind, it also might not mean it's for children. With that in mind, let us once more explore the moments from kids' movies that left many a child traumatized. "Night on Bald Mountain" in Fantasia (or, The One With Satan) As the third Walt Disney film ever, Fantasia came out only two years after Snow White and right after Pinocchio. This caused a lot of misconceptions about how mating works in the animal kingdom. Everything seemed relatively normal for a children's film until the introduction to the last segment, in which we're told, "Bald Mountain, according to tradition, is the gathering place of Satan and his followers... ". Donald, Mickey, Goofy ... ... and a Ghouls 'n Ghosts-worthy end boss.

7 Scientific Reasons a Zombie Outbreak Would Fail (Quickly) Let's pretend for a moment that zombies are real (as if half of you weren't already daydreaming about that very thing). Have you noticed how most zombie movies take place only after the apocalypse is in full-swing? By the time we join our survivors, the military and government are already wiped out, and none of the streets are safe. There's a reason the movie starts there, and not earlier. #7. Do you know why we, as humans, are at the top of the current food chain? We are simply too smart and too well-armed for any wild animal to hunt. If you're saying, "Sure, but it's not like my city is full of bears that can come eat all the zombies," you need to think smaller. Not so disgusting now, are they? We'll scale up a bit: In America alone, we have bears, wolves, coyotes and cougars, all of which can put well-armed, thinking, fast-moving humans on the menu, if the conditions are right. Now imagine zombie hordes wandering Africa. #6. The first concern is putrefaction. #5. Look at it. #4.

Anna and his company can no way be called Gandhians : Jyotirmaya Sharma News Jyotirmaya Sharma | Mail Today | August 18, 2011 | UPDATED 09:46 IST Ãn these fraught and intolerant times, disclaimers are essential. Firstly, the UPA-II has forfeited all legitimacy to rule and has neither a sense of vision nor does it have a sense of purpose. Secondly, by behaving in the manner that it has in the past one year, the Congress and its allies would solely be responsible if the BJP were to come to power in 2014 or whenever elections are held. Caretaker governments have had a greater sense of purpose than the present government, which has rendered itself and the country into a sordid spectacle. Character Having said this, the limited point that I want to make here is that Mr. A Gandhian would follow a methodology that is based on a larger moral and ethical framework. In a Gandhian universe, the first level of appeal is to individuals to question moral, ethical and material corruption in their own backyard. For this reason alone, neither are Mr. Gandhi Democracy