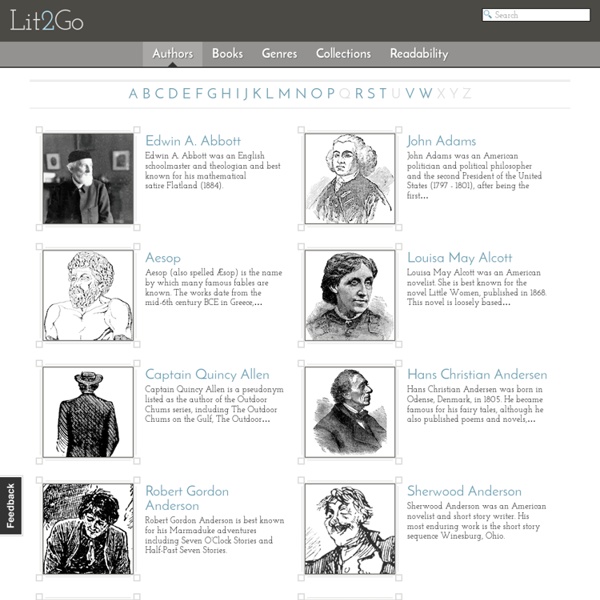 Short Stories for College Students This page contains a wide selection of short fiction appropriate for college / university students. Every story is part of the literary canon and is suitable for deep reading and studying the usual story elements: plot, point of view, character, setting, tone and style, theme, and symbol. For stories that are about college see Campus | Academic The stories on this page are well known, so you’ll be able to find a lot of explanatory notes on most of them to supplement your understanding. 11 Free Reading Websites for Kids At Really Good Stuff, we know that teachers and parents have limited time when it comes to finding free, high-quality online resources for their children. When we first published the 11 Free Reading Websites for Kids article, we had no idea the response it would have. In fact, the cry for more resources encouraged us to publish 11 Free Math Websites for Kids. We hope you find this article and the free resources in contains helpful! 11 Free Reading Sites for Kids

Many Short Stories are here for your enrichment. This page is dedicated to Short Stories and to those interested in reading light prose. Fewer and fewer people these days read stories. This is unfortunate. So only the lucky few will experience the joy that reading such fine work can give.

26 Inspiring Poems About the Joys and Importance of Books and Reading “Oh, for a nook and a storybook. With tales both new and old. For a jolly good book whereon to look. Is better to me than gold.”— Old English Song. April is National Poetry Month. 30 Free Short Stories You Can Read Online Right Now Those of us who love short stories know the magic behind a well-told tale. There are times when you just need a complete story with a beginning, a middle, and an end. And you need it fast. Well, we’ve got some great news:A lot of incredible short stories are actually available online, and you can read them for free right now.

These Ancient Trees Have Stories to Tell Over three trillion trees live on planet Earth, and yet we know so few of their stories. Of course all trees play an important role—purifying the air, hosting the feathered and the furry, teaching kids (and kids at heart) how to climb—but some have spent more time doing these things than others. Quiver trees, for example, can live up to 300 years, oaks can live a thousand years, and bristlecone pines and yews can survive for millennia. Read 19 Short Stories From Nobel Prize-Winning Writer Alice Munro Free Online Calling her a “master of the contemporary short story,” the Swedish Academy awarded 82-year-old Alice Munro the Nobel Prize in Literature today. It is well-deserved, and hard-earned (and comes not long after she announced her retirement from fiction). After 14 story collections, Munro has reached at least a couple generations of writers with her psychologically subtle stories about ordinary men and women in Huron County, Ontario, her birthplace and home. Only the 13th woman writer to win the Nobel, Munro has previously won the Man Booker Prize in 2009, the Governor General’s Literary Award for Fiction in Canada three times (1968, 1978, and 1986), and two O. Henry Awards (2006 and 2008).

Analysis of 'She Unnames Them' by Ursula K. LeGuin Ursula K. Le Guin, a writer predominantly of science fiction and fantasy, was awarded the 2014 National Book Foundation Medal for Distinguished Contribution to American Letters. "She Unnames Them," a work of flash fiction, takes its premise from the Biblical book of Genesis, in which Adam names the animals. The story originally appeared in The New Yorker in 1985, where it is available to subscribers. A free audio version of the author reading her story is also available. Genesis

Norway considers giving mountain to Finland as 100th birthday present What do you give a country that has 188,000 lakes for a birthday present? Its highest mountain back, obviously. Norway’s government has confirmed that for the centenary of Finland’s independence next year it is considering moving the border, gifting its Nordic neighbour a mountain peak that would be the country’s highest point. “There are a few formal difficulties and I have not yet made my final decision,” the Norwegian prime minister, Erna Solberg, told NRK, the national broadcaster. “But we are looking into it.” At 1,324 metres above sea level, the highest point in Finland currently lies on a bleak mountain spur known as Hálditšohkka, part of a far larger fell known as Halti, more than 200 miles inside the Arctic Circle.