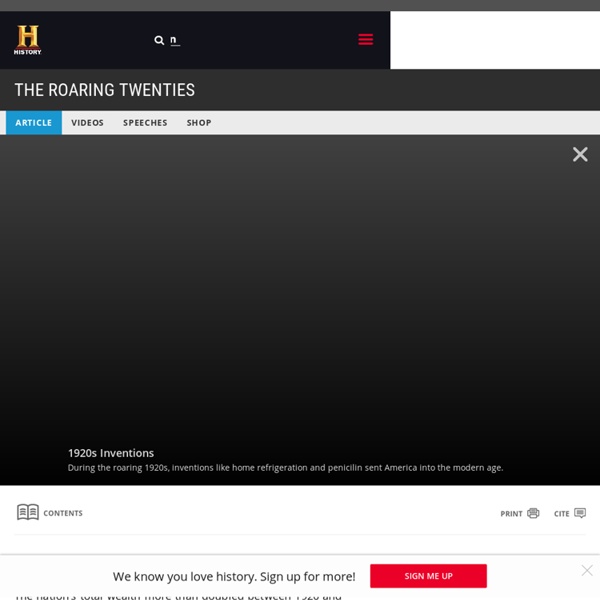 Prohibition was not the only source of social tension during the 1920s. The Great Migration of African Americans from the Southern countryside to Northern cities and the increasing visibility of black culture—jazz and blues music, for example, and the literary movement known as the Harlem Renaissance—discomfited some white Americans. Millions of people in places like Indiana and Illinois joined the Ku Klux Klan in the 1920s. To them, the Klan represented a return to all the “values” that the fast-paced, city-slicker Roaring Twenties were trampling. Likewise, an anti-Communist “Red Scare” in 1919 and 1920 encouraged a widespread nativist, or anti-immigrant, hysteria. This led to the passage of an extremely restrictive immigration law, the National Origins Act of 1924, which set immigration quotas that excluded some people (Eastern Europeans and Asians) in favor of others (Northern Europeans and people from Great Britain, for example).

The Birth of Israel At the end of World War II, the conflict over Palestine gained momentum. As early as 1942, the Yishuv, the Jewish community in Palestine, had turned to the United States for support of the Jewish state in Palestine. Even after the horror of the Holocaust, Britain refused to change its policy of allowing no further Jewish immigration. Despite the hundreds of thousands of Jews languishing in Allied displaced persons camps, the British locked the gates to Palestine. British ships stopped ships and forced the refugees into camps they had established on Cyprus.

The Little-Known Story of the Night Witches, an All-Female Force in WWII In the Nazi-occupied Soviet Union, German soldiers had a very real fear of witches. Namely, the “Night Witches,” an all-female squadron of bomber pilots who ran thousands of daring bombing raids with little more than wooden planes and the cover of night—and should be as celebrated as their male counterparts. This month marks the 73rd anniversary of the start of their pioneering service. In June of 1941, the Axis powers pushed into the Soviet Union using the largest invading force in the history of warfare. The infamous Operation Barbarossa saw about four million troops wade into Russia from the west, establishing a line that threatened to overtake Moscow itself.

The birth of Israel The former BBC Middle East correspondent, Tim Llewellyn, looks back at the history of Israel. The contrast between the growing Jewish society in Palestine - the Yishuv - and the indigenous, mainly Muslim Arab population could not have been greater. In 1917, two-thirds of the roughly 600,000 Arab population, were rural and village-based, with local, clannish loyalties and little connection with the towns. What passed for "national" Arab leadership was based in the towns, though there was little national identity. Two or three established, rival families dominated Palestinian politics.

The Story of Propaganda The fact that wars give rise to intensive propaganda campaigns has made many persons suppose that propaganda is something new and modern. The word itself came into common use in this country as late as 1914, when World War I began. The truth is, however, that propaganda is not new and modern. Nobody would make the mistake of assuming that it is new if, from early times, efforts to mobilize attitudes and opinions had actually been called “propaganda.” The battle for men’s minds is as old as human history.

History of chess - Wikipedia Real-size resin reproductions of the 12th century Lewis chessmen. The top row shows king, queen, and bishop. The bottom row shows knight, rook, and pawn. The Industrial Revolution and the changing face of Britain An exhibition at the Barber Institute of Fine Arts (2008-9) During the late 18th and early 19th centuries, Britain experienced change in all aspects of life, as a result of the Industrial Revolution. Scientific advances and technological innovations brought growth in agricultural and industrial production, economic expansion and changes in living conditions, while at the same time there was a new sense of national identity and civic pride. The most dramatic changes were witnessed in rural areas, where the provincial landscape often became urban and industrialized following advances in agriculture, industry and shipping.

Food Preservation History: Here Explained Fully with Timeline Food preservation has been followed in all cultures at different points in time. Nature had to be harnessed for man to survive. From the ancient art of sun drying, to modern, hi-tech dehydrators, the journey has been a long one.

The Beats and Sixites Counterculture The 1960s are associated with what Frank calls ‘the big change, the birthplace of our own culture, the homeland of hip’, a period of various shifts that have shaped our current society[1]. This hints at an underlying consensus that the 1960s were a time of high artistic endeavour, the centre of countercultural resistance, and some of the cultural ripples that are still being felt today. by Jed Skinner