The Roaring Twenties - Facts & Summary. Prohibition was not the only source of social tension during the 1920s. 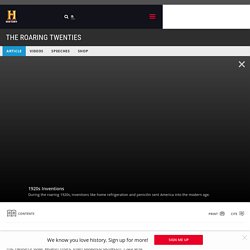 The Great Migration of African Americans from the Southern countryside to Northern cities and the increasing visibility of black culture—jazz and blues music, for example, and the literary movement known as the Harlem Renaissance—discomfited some white Americans. Millions of people in places like Indiana and Illinois joined the Ku Klux Klan in the 1920s. To them, the Klan represented a return to all the “values” that the fast-paced, city-slicker Roaring Twenties were trampling. Likewise, an anti-Communist “Red Scare” in 1919 and 1920 encouraged a widespread nativist, or anti-immigrant, hysteria. This led to the passage of an extremely restrictive immigration law, the National Origins Act of 1924, which set immigration quotas that excluded some people (Eastern Europeans and Asians) in favor of others (Northern Europeans and people from Great Britain, for example).

Digital History. Printable Version The expansion of government activities during World War I was reversed during the 1920s. 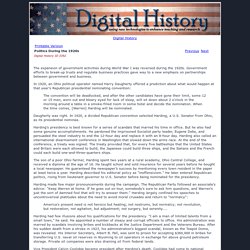 Government efforts to break-up trusts and regulate business practices gave way to a new emphasis on partnerships between government and business. In 1920, an Ohio political operator named Harry Daugherty offered a prediction about what would happen at that year's Republican presidential nominating convention: The convention will be deadlocked, and after the other candidates have gone their limit, some 12 or 15 men, worn out and bleary eyed for lack of sleep, will sit down about 2 o'clock in the morning around a table in a smoke-filled room in some hotel and decide the nomination. When the time comes, [Warren] Harding will be nominated. Daugherty was right. Harding's presidency is best known for a series of scandals that marred his time in office. The son of a poor Ohio farmer, Harding spent two years at a rural academy, Ohio Central College, and received a diploma at the age of 16. 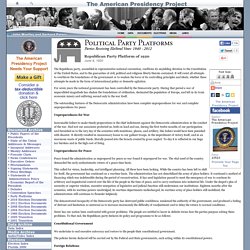 It will resist all attempts to overthrow the foundations of the government or to weaken the force of its controlling principles and ideals, whether these attempts be made in the form of international policy or domestic agitation. For seven years the national government has been controlled by the Democratic party. During that period a war of unparalleled magnitude has shaken the foundations of civilization, decimated the population of Europe, and left in its train economic misery and suffering second only to the war itself. The outstanding features of the Democratic administration have been complete unpreparedness for war and complete unpreparedness for peace. Unpreparedness for War Unpreparedness for Peace Never has our nation been confronted with graver problems.

Wall Street Crash of 1929 and its aftermath. The strength of America’s economy in the 1920’s came to a sudden end in October 1929 – even if the signs of problems had existed before the Wall Street Crash. 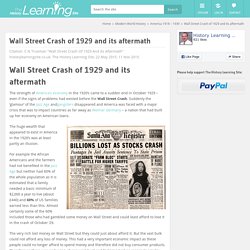 Suddenly the ‘glamour’ of the Jazz Age andgangsters disappeared and America was faced with a major crisis that was to impact countries as far away as Weimar Germany – a nation that had built up her economy on American loans. The huge wealth that appeared to exist in America in the 1920’s was at least partly an illusion. For example the African Americans and the farmers had not benefited in the Jazz Age but neither had 60% of the whole population as it is estimated that a family needed a basic minimum of $2,000 a year to live (about £440) and 60% of US families earned less than this. Almost certainly some of the 60% included those who had gambled some money on Wall Street and could least afford to lose it in the crash of October ‘29. The very rich lost money on Wall Street but they could just about afford it. See also: American History: Fear of Communism in 1920 Threatens Civil Rights. Or download MP3 (Right-click or option-click and save link) BOB DOUGHTY: Welcome to THE MAKING OF A NATION -- American history in VOA Special English. 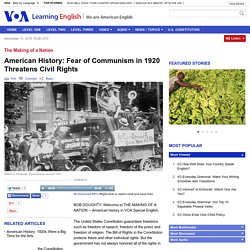 The United States Constitution guarantees freedoms such as freedom of speech, freedom of the press and freedom of religion. How Prohibition backfired and gave America an era of gangsters and speakeasies. On Saturday, 17 January 1920, the Manchester Guardian reported with mild incredulity on one of the most extraordinary experiments in modern democratic history. 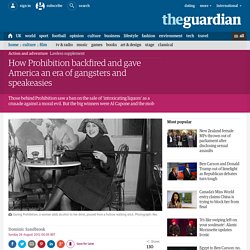 "One minute after midnight tonight," the story began, "America will become an entirely arid desert as far as alcoholics are concerned, any drinkable containing more than half of 1 per cent alcohol being forbidden. " Roaring Twenties and Information for Kids. The Roaring Twenties is a phrase used to refer to the 1920s in the United States, Canada, and the United Kingdom. 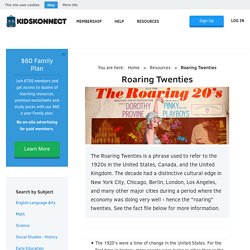 The decade had a distinctive cultural edge in New York City, Chicago, Berlin, London, Los Angeles, and many other major cities during a period where the economy was doing very well - hence the "roaring" twenties. See the fact file below for more information. A Bio. of America: The Twenties - Feature. Teaching the American 20s. DECADENT AMERICA: The Roaring Twenties (720p) America in the 20th Century The Roaring Twenties. The Century: America's Time - 1920-1929: Boom To Bust.