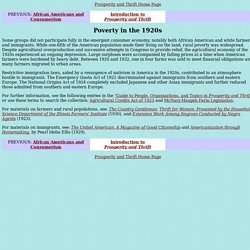 While one-fifth of the American population made their living on the land, rural poverty was widespread. Despite agricultural overproduction and successive attempts in Congress to provide relief, the agricultural economy of the 1920s experienced an ongoing depression. Large surpluses were accompanied by falling prices at a time when American farmers were burdened by heavy debt. Restrictive immigration laws, aided by a resurgence of nativism in America in the 1920s, contributed to an atmosphere hostile to immigrants.

For further information, see the following entries in the "Guide to People, Organizations, and Topics in Prosperity and Thrift" or use these terms to search the collection: Agricultural Credits Act of 1923 and McNary-Haugen Farm Legislation. Insulin Discovered. History of Bubble Gum and Chewing Gum. Chewing gum has a history that spans as far back as the ancient Greeks, who chewed the resin from mastic trees. 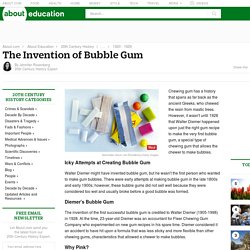 However, it wasn't until 1928 that Walter Diemer happened upon just the right gum recipe to make the very first bubble gum, a special type of chewing gum that allows the chewer to make bubbles. Icky Attempts at Creating Bubble Gum Walter Diemer might have invented bubble gum, but he wasn't the first person who wanted to make gum bubbles.

There were early attempts at making bubble gum in the late 1800s and early 1900s; however, these bubble gums did not sell well because they were considered too wet and usually broke before a good bubble was formed. Diemer's Bubble Gum. Organized Crime in 1920s Chicago. 1920s World Events. CR20: The 1920's. Smaller bootleggers and distributors were "squeezed" out one by one in this lawless age of the tommygun. 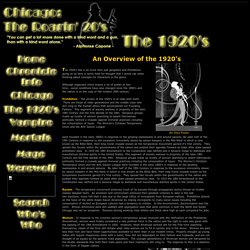 Gang wars caused by territorial disputes spilled out onto urban streets and soon the nation began to quietly think that this "prohibition experiment" was failing.The Capone gang was big in Chicago and indeed around the country. They smuggled in from Canada liquor for private distribution as well as for consumption in underground bars called speakeasies. Speakeasies came in a number of disguises like funeral homes with a secret entrance....where everyone drank 100 proof "coffee". These disguises were known as fronts and often had big gorillas as doormen waiting behind a sliding panel to hear the password. Scarface himself enjoyed much celebrity in Chicago prior to February 14, 1929. Capone's chief thorn in the side was the North Side Gang led by Dion O'Banion and then later by Bugs Moran. 1920s Clothing (PHOTOS) - Victoriana Magazine. 1920s. 1920s Timeline - History Timeline of the 1920s. Education 20th Century History Share this page on: Send to a Friend via Email Your suggestion is on its way! 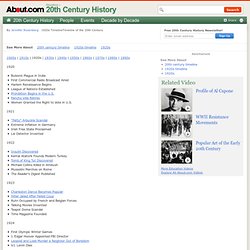 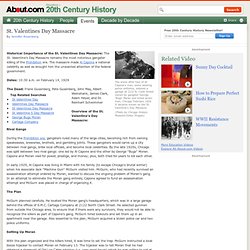 Valentines Day Massacre: The St. Valentine's Day Massacre remains the most notorious gangster killing of the Prohibition era. The massacre made Al Capone a national celebrity as well as brought him the unwanted attention of the federal government. Dates: 10:30 a.m. on February 14, 1929 The Dead: Frank Gusenberg, Pete Gusenberg, John May, Albert Weinshank, James Clark, Adam Heyer, and Dr. 1920s Timeline - History Timeline of the 1920s. Advertising in the 1920s.

Advertising in the 1920s Advertising as it is known today finds its roots in the industrial expansion of the 1880s. 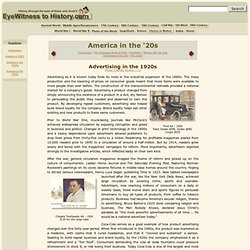 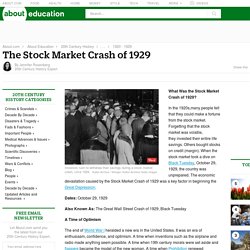 In the 1920s,many people felt that they could make a fortune from the stock market. Forgetting that the stock market was volatile, they invested their entire life savings. Others bought stocks on credit (margin). Prohibition. What Was Prohibition? Prohibition was a period of nearly fourteen years of U.S. history in which the manufacture, sale, and transportation of liquor was made illegal.

It led to the first and only time an Amendment to the U.S. Constitution was repealed. Dates: Also Known As: Noble Experiment Overview of Prohibition. Canada's Growing Autonomy. Quia. GCSE Bitesize: The 1920s overview. 1920s' Prohibition: Moonshine, Bootleggers, and Speakeasies. 1920s' PROHIBITION 1920s’ Prohibition, restriction of the production, sale, transportation, importation, and exportation of alcoholic beverages, began when the Eighteenth Amendment to the Constitution went into effect on January 16, 1920. 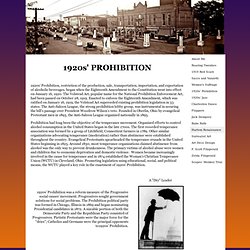 The Volstead Act, popular name for the National Prohibition Enforcement Act, had been passed on October 28, 1919. Enacted to enforce the Eighteenth Amendment, which was ratified on January 16, 1919, the Volstead Act superceded existing prohibition legislation in 33 states. Roaring Twenties. Many people believe that the 1920s marked a new era in United States history. 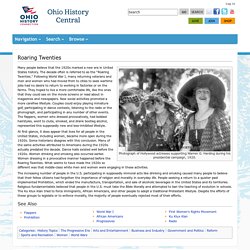 The decade often is referred to as the "Roaring Twenties. " Following World War I, many returning veterans and men and women who had moved from to cities to seek wartime jobs had no desire to return to working in factories or on the farms. They hoped to live a more comfortable life, like the ones that they could see on the movie screens or read about in magazines and newspapers. New social activities promoted a more carefree lifestyle. Flappers in the Roaring Twenties. In the 1920s, a new woman was born. 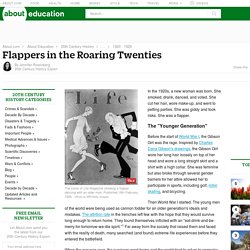 She smoked, drank, danced, and voted. She cut her hair, wore make-up, and went to petting parties. She was giddy and took risks. She was a flapper.