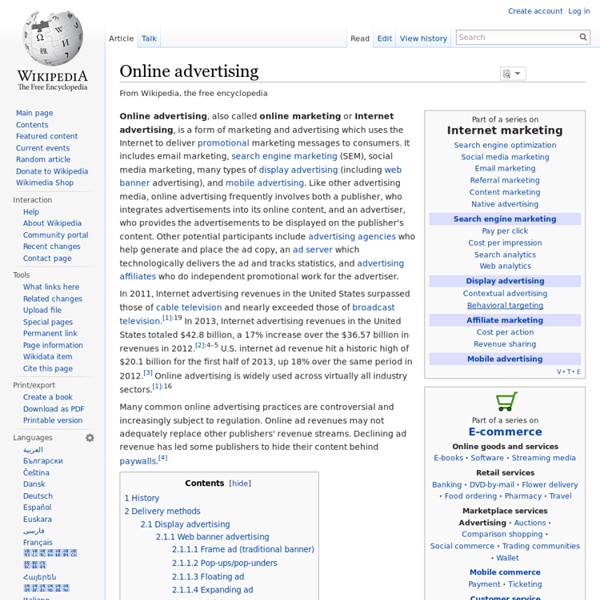 In 2011, Internet advertising revenues in the United States surpassed those of cable television and nearly exceeded those of broadcast television.[1]:19 In 2013, Internet advertising revenues in the United States totaled $42.8 billion, a 17% increase over the $36.57 billion in revenues in 2012.[2]:4–5 U.S. internet ad revenue hit a historic high of $20.1 billion for the first half of 2013, up 18% over the same period in 2012.[3] Online advertising is widely used across virtually all industry sectors.[1]:16 Many common online advertising practices are controversial and increasingly subject to regulation. Online ad revenues may not adequately replace other publishers' revenue streams. Declining ad revenue has led some publishers to hide their content behind paywalls.[4] History[edit] In early days of the Internet, online advertising was mostly prohibited. Search ads. Recent trends. Delivery methods[edit] Display advertising[edit] Web banner advertising[edit] Frame ad (traditional banner)[edit]

Web analytics Web analytics is not just a tool for measuring web traffic but can be used as a tool for business and market research, and to assess and improve the effectiveness of a website. Web analytics applications can also help companies measure the results of traditional print or broadcast advertising campaigns. It helps one to estimate how traffic to a website changes after the launch of a new advertising campaign. Angel investor An angel Investor or angel (also known as a business angel or informal investor) is an affluent individual who provides capital for a business start-up, usually in exchange for convertible debt or ownership equity. A small but increasing number of angel investors organize themselves into angel groups or angel networks to share research and pool their investment capital, as well as to provide advice to their portfolio companies.[1] Etymology and origin[edit] The term "angel" originally comes from Broadway, where it was used to describe wealthy individuals who provided money for theatrical productions. In 1978, William Wetzel,[2] then a professor at the University of New Hampshire and founder of its Center for Venture Research, completed a pioneering study on how entrepreneurs raised seed capital in the USA, and he began using the term "angel" to describe the investors that supported them.

Analytics Analytics is the discovery and communication of meaningful patterns in data. Especially valuable in areas rich with recorded information, analytics relies on the simultaneous application of statistics, computer programming and operations research to quantify performance. Analytics often favors data visualization to communicate insight. Startup company Evolution of a startup company[edit] Startup companies can come in all forms and sizes. A critical task in setting up a business is to conduct research in order to validate, assess and develop the ideas or business concepts in addition to opportunities to establish further and deeper understanding on the ideas or business concepts as well as their commercial potential. Business models for startups are generally found via a bottom-up or top-down approach. A company may cease to be a startup as it passes various milestones,[2] such as becoming publicly traded in an IPO, or ceasing to exist as an independent entity via a merger or acquisition. Companies may also fail and cease to operate altogether.

Display advertising Display advertising is a type of advertising that is located on websites. It can be seen in a wide range of different formats and contains items such as texts, images, flash, video and audio.[1] The main purpose is to deliver general advertisements and brand messages to the plus 40 million people connected to the Internet each month.[2] History[edit] Since the early 90’s the advent of the Internet has completely changed the way in which people relate to advertisements. Computers’ prices moved downward and the access to the online world became accessible to everyone.[3] This change has modified the way in which people tend to be informed, and the way in which they are exposed to media and advertising by creating different online channels through which advertisements can reach users.[4]

Mockup In manufacturing and design, a mockup, or mock-up, is a scale or full-size model of a design or device, used for teaching, demonstration, design evaluation, promotion, and other purposes. A mockup is a prototype if it provides at least part of the functionality of a system and enables testing of a design.[1] Mock-ups are used by designers mainly to acquire feedback from users. Mock-ups address the idea captured in a popular engineering one-liner: You can fix it now on the drafting board with an eraser or you can fix it later on the construction site with a sledge hammer.[2] Applications[edit] Mockups are used virtually everywhere a new product is designed. A few specific examples are the following:

Quality assurance Quality Assurance (QA) is a way of preventing mistakes or defects in manufactured products and avoiding problems when delivering solutions or services to customers. QA is applied to physical products in pre-production to verify what will be made meets specifications and requirements, and during manufacturing production runs by validating lot samples meet specified quality controls. QA is also applied to software to verify that features and functionality meet business objectives, and that code is relatively bug free prior to shipping or releasing new software products and versions. Suitable quality is determined by product users, clients or customers, not by society in general. It is not related to cost, and adjectives or descriptors such as "high" and "poor" are not applicable.