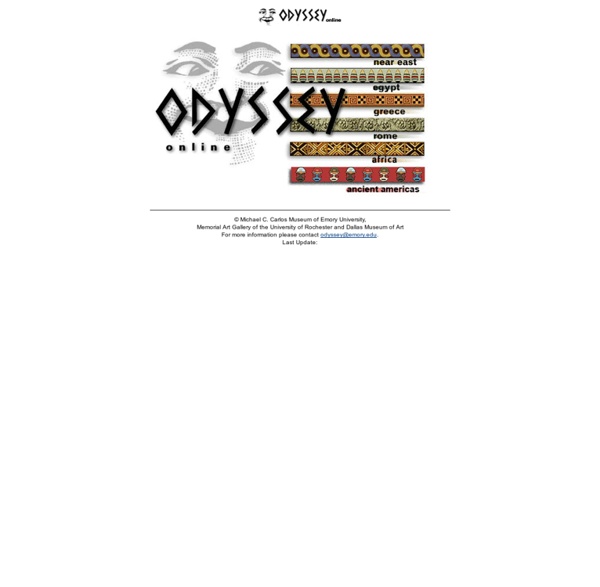 Related:  Europe, and Its History • History

10 People Who Were Erased From History History Throughout time, man has attempted to keep an accurate historical record of the events that came before them. Originating in oral history, passed down through generations, and eventually recorded as written texts, these stories have been cherished for centuries as the only connection to a world that would be otherwise forgotten. As is often the case, at times it became inconvenient for certain truths to be widely known, let alone published as an eternal record.

Medieval Names Archive This collection of articles on medieval and Renaissance names is intended to help historical re-creators to choose authentic names. These articles were gathered from various places, and some of them appear elsewhere. In all cases, the copyright on each article belongs to its authors.

Greece - Quest for the Gods Greece - Quest for the Gods -Â In this documentary, Richard Bangs embarks on a great odyssey in Greece, land of the Gods. From the amber of ancient times to the present, the Western world has basked in the glorious inspiration of the Greek myths. These strangely magnificent stories are deeply embedded in our culture and even our collective unconscious. On this trip we seek to discover the relevance and meaning the great gods of Olympus might have for us today. Water Cures in Ancient China Water Cures in Ancient China Water is the source of every thing on earth, and traditional Chinese medicine (TCM) uses it as an important ingredient for healing. The well-known pharmacopoeia, the Bencao Gangmu (Compendium of Materia Medica), has classified water into different types, as the ancient Chinese held that water could exert diverse effects according to its source, for example: The tradition of water cures occurs in many cultures. As washing and cleaning became a routine sanitary procedure, bathing turned into a kind of rejuvenating activity and various types evolved, including immersion in hot springs, saunas, douches, and baths.

Ancient Civilizations – Lost History? This has nothing to do with Ancient Aliens please don’t bring that in here. I’ve always been interested in alternative information and theories and recently stumbled on the idea of civilization being much older than conventional wisdom says it is. Do any of you believe the history of our civilization is much older than conventional wisdom says it is? I’m fascinated by what history we may have lost due to global catastrophes, climate change, and simply the erosion of time.

Famous Greek People: Socrates, Plato, and Aristotle Ancient Greek philosophy addressed an array of subjects, such as political philosophy or the study of liberty, justice, property, law, rights and law enforcement, metaphysics, ontology, rhetoric, aesthetics, ethics, logic and biology. Greek philosophy has roots stemming from the 6th century BCE and continuing its sphere of influence well into the reign of the Roman Empire. Some argue that ancient Greek philosophers, such as Socrates, Plato, and Aristotle, had contact with the older roots of oriental cosmology and theology, which is often referred to as pre-Socratic philosophical school of thought.

Marco Polo - Exploration Two years later, Niccolò and Maffeo sailed to Acre in present-day Israel, this time with Marco at their side. At the request of Kublai Khan, they secured some holy oil from the Church of the Holy Sepulchre in Jerusalem and then backtracked to Acre to pick up gifts, papal documents and two friars from newly elected Pope Gregory X. The friars quickly abandoned the expedition, but the Polos continued on, possibly by camel, to the Persian port city of Hormuz. Failing to find any boats to their liking, they instead took take a series of overland traders’ routes that, in the 19th century, would become known as the Silk Road. Over the next three years they slowly trekked through deserts, high mountain passes and other rough terrain, meeting people of various religions and cultures along the way.

Ancient American's On-Line Theme Unit Page 1 Ancient New World Civilizations: The Big Picture Activity: Native cultures have existed in the Americas for thousands of years. Introduce some of the major ancient cultures to your students by creating a time line and a map of the early civilizations of North, Central, and South America. Background: Talk with your students about the long history of Native American cultures. People lived on this continent long before the early European settlers established colonies on American soil — even long before Christopher Columbus arrived in 1492.

Old Europe (archaeology) Old Europe is a term coined by archaeologist Marija Gimbutas to describe what she perceives as a relatively homogeneous pre-Indo-European Neolithic culture in southeastern Europe located in the Danube River valley.[1][2][3] (See also the Danube Valley civilization[4] Megalithic Temples of Malta and Prehistoric Balkans.) In her major work, The Goddesses and Gods of Old Europe: 6500–3500 B.C. (1982), she refers to these Neolithic cultures as Old Europe (Neolithic Europe and Pre-Indo-European as synonymous). Archaeologists and ethnographers working within her framework believe that the evidence points to later migrations and invasions of the peoples who spoke Indo-European languages at the beginning of the Bronze age (the Kurgan hypothesis). Marija Gimbutas investigated the Neolithic period in order to understand cultural developments in settled village culture in the southern Balkans, which she characterized as peaceful, matrilineal, and possessing a goddess-centered religion.

Religion and gods in ancient Egypt Religion governed life at all levels of Egyptian society. Ancient Egyptian coffin painted with winged serpent Photographer: © Australian Museum From natural forces like the rise and fall of the Nile and the passage of the sun, to death, healing, childbirth and prosperity – all were inseparable from gods and magic. Religion Ancient History 4.5 billion B.C. Planet Earth formed. 3 billion B.C. First signs of primeval life (bacteria and blue-green algae) appear in oceans. 600 million B.C.