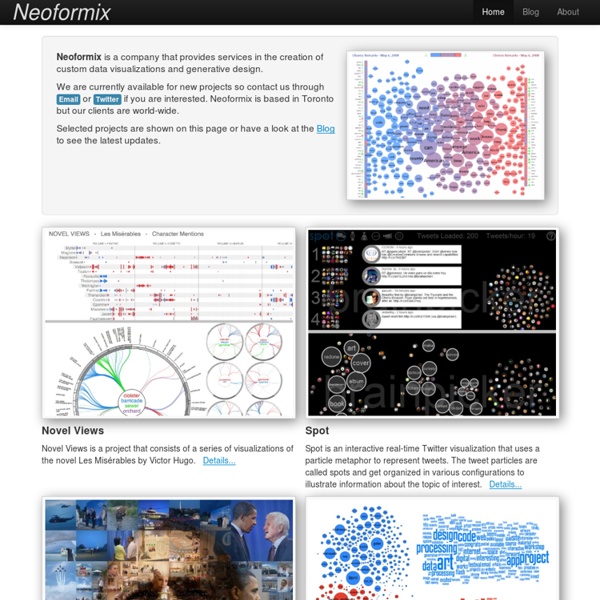 99 Essential Twitter Tools And Applications 99 Essential Twitter Tools And Applications Advertisement If you haven’t heard of Twitter1 by now, you must be living under a rock! Latest As I mentioned in my previous post, our collaboration with the Sabeti Lab is aimed at creating new visual exploration tools to help researchers, doctors, and clinicians discover patterns and associations in large health and epidemiological datasets. These tools will be the first step in a hypothesis-generation process, combining intuition from expert users with visualization techniques and automated algorithms, allowing users to quickly test hypothesis that are “suggested” by the data itself. Researchers and doctors have a deep familiarity with their data and often can tell immediately when a new pattern is potentially interesting or simply the result of noise. Visualization techniques will help articulate their knowledge to a wider audience.

How to Develop a Social Media Plan for Your Business in 5 Steps Social media can be an incredible tool for your business, providing you with more customer insight, direct communication channels and the ability to measure the effectiveness of these conversations very closely. But as the proliferation of social media platforms grow, participating can turn into little more than a giant time suck without some sort of structure behind it. With that in mind, we've put together a 5 step plan for kickstarting your company's social media participation: SXSW conversations: some quick thoughts on the past, present, an AUSTIN, Texas--Someone blogged that South by Southwest Interactive is just like the Internet itself: disjointed, decentralized, scattered, fast, aggressive, random, fragmented, and so on. In fact, the main commonality between the two may be that the number of attributes to describe them is infinite. Like the Internet, the annual tech conference here is an echo chamber of an echo chamber, a place where original thought and commentary get mixed up and mashed up in a highly self-referential meta conversation.

TwitPwr Are you using content marketing as part of your digital strategy to grow your business? If so, you're not alone. According to the Content Marketing Institute, the lion's share of marketers (some 92%) report using content marketing. At SXSW, Location Awareness Is The New Black The annual SXSW Festival is on, and this year I am surprised by the number of location-aware mobile services being launched in Austin, Texas, many of them for Apple’s iPhone. SocialBomb launched its Paparazzi game, which allows you to click and share photos of your friends and having them mapped to location. I love this little game. Too bad I have moved off the iPhone platform.Dennis Crowley, creator of Dodgeball is back for an encore with Foursquare, which turns nightlife into a game (at least for those who live in San Francisco, New York, Chicago, Los Angeles and Austin).

Finding the Right &quot;Brand Voice&quot; on Twitter Kai Turner is head of Information Architecture at Agency.com – London. You can follow him on Twitter. When businesses open an account on Twitter, they must consider the right “Brand Voice.” It must be appropriate for what they want to say, and who they want to reach — a different sort of voice from the one companies have used in traditional print and broadcast media channels. Twitter works best with an even more open and authentic form of communication. GrandCentral To (Finally) Launch As Google Voice. It&amp;#8217;s GrandCentral, a phone management service that first launched in 2006 and was acquired by Google for $50+ million in 2007, hasn’t been in the news much lately. Other than a few good natured jabs at their marketing gimmicks and coverage of outages, that is. Get ready for that to change as the service prepares for a public launch under a new product name: Google Voice. The 21 month delay between acquisition and relaunch was, unfortunately, expected.

20 Great Music Applications For Facebook Remember the time when we announced Facebook as a platform? Well, a lot has changed since then: thousands of great applications for Facebook have appeared, and having a "naked" Facebook profile is just not that cool these days. This time, we've assembled a list of 20 great music-related apps for Facebook that you simply must try out. My Music - here's one for all you iTunes users: this handy little app enables you to access your entire iTunes library directly from Facebook. Pandora - tune into Pandora from Facebook and find your new favorite songs and artists.

Top 10 Reputation Tracking Tools Worth Paying For Dan Schawbel is the author of Me 2.0: Build a Powerful Brand to Achieve Career Success, and owner of the award winning Personal Branding Blog. Reputation management is essential to both individuals and companies. The more popular your brand is, the more critical it will be to keep tabs on it and the more time it will consume out of your day.

The New Robert Scobles: Seven Leading Corporate Social Media Eva Robert Scoble blazed a big trail by blogging and producing video as a technical evangelist for Microsoft from 2003 through 2006. No longer at Microsoft, Scoble now produces media for media's sake at FastCompany.tv. Others have followed his lead, knowingly or not, and job titles like "social media evangelist" are no longer nearly as rare as they used to be.

17 Ways to Visualize the Twitter Universe I just created a new Twitter account, and it got me to thinking about all the data visualization I've seen for Twitter tweets. I felt like I'd seen a lot, and it turns out there are quite a few. Here they are grouped into four categories - network diagrams, maps, analytics, and abstract. Network Diagrams Twitter is a social network with friends (and strangers) linking up with each other and sharing tweets aplenty. These network diagrams attempt to show the relationships that exist among users. Twitter Music Promotion &amp; Marketing Guide for Musicians, Ban Links to everything you always wanted to know about using Twitter to market your music, connect with fans, promote your live shows, and sell more music. An ever-expanding page of incredibly useful Twitter music resources. Compiled by Bob Baker, who you can follow on Twitter here What Is Twitter?

18 of the Best Music Tumblelogs Tumblr has long been a site that promotes outside-of-the-box blogging with inside-of-the-box restrictions. Originally just a short-form way to tumble across the web and quickly post photos, videos, audio, text, and quotes, Tumblrs everywhere now appear in all shapes and sizes. One very popular niche approach is to focus tumblelogs around celebrating the art form that is music.