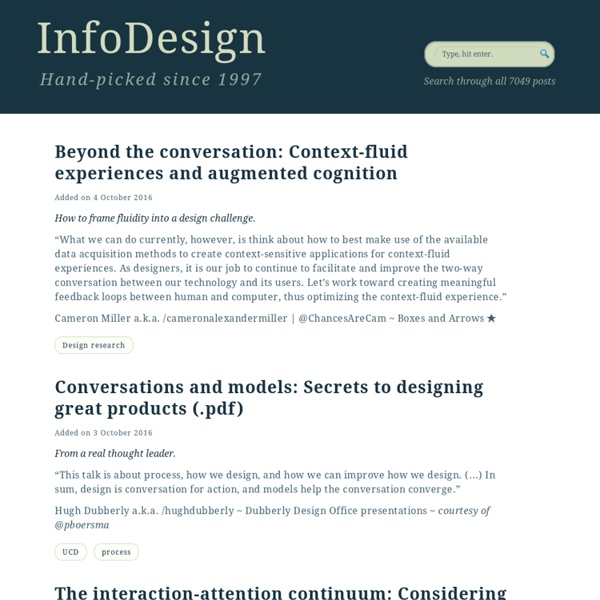 Passive versus imperative linking As we know, links are the best part of non-linearity. “Writers worry about whether links will distract users. To discuss this concern, we need to begin by distinguishing between imperative links that command the reader to click and passive links that merely make finding ancillary material easier.” (Mark Baker ~ Every page is one) Interaction design for the internet of things

ARISTOTLE" (THE KNOWLEDGE WEB) By W. Daniel Hillis Bush's imagined solution to this problem was something he called Memex. Memex was envisioned as a system for manipulating and annotating microfilm (computers were just then being invented). The system would contain a vast library of scholarly text that could be indexed by associations and personalized to the user Although Memex was never built, the World Wide Web, which burst onto the scene half a century later, is a rough approximation of it.

feltron Mapping Neighborhoods in Boston, San Francisco and New York. Hand-drawn animation of 43 years of the Sun’s weather. (via kottke) William Stone Branching Drawings (identified by wowgreat) Geometric choropleths 1895 vs 1978 Prototyping and Wireframing - It's your choice which diagram tool supports your work best I do not know whether you know it, but there are more than one real good wireframe tool in the software orbit - and there aren't a best for every one. As freelancer I have to gear myself and my work up for my individual clients, their business and their development procedures. And I am forced to work with different tools. And I have owned several licenses for various wireframe tools to support my client as good as I can.

Maps In Modern Web Design: Showcase and Examples - Smashing Magazine Advertisement Geo-location was a hot topic in 2009. With so many applications on GPS-enabled smartphones, more maps than ever were accessible to the average person. But how can Web designers and developers take advantage of an increasingly location-aware user base? This article explores existing trends, conventions and the possible future of interactive maps online. The Fundamentals Of Online Maps 37 tools It's often said that data is the new world currency, and the web is the exchange bureau through which it's traded. As consumers, we're positively swimming in data; it's everywhere from labels on food packaging design to World Health Organisation reports. As a result, for the designer it's becoming increasingly difficult to present data in a way that stands out from the mass of competing data streams. Get Adobe Creative Cloud One of the best ways to get your message across is to use a visualization to quickly draw attention to the key messages, and by presenting data visually it's also possible to uncover surprising patterns and observations that wouldn't be apparent from looking at stats alone.

The Cognitive Style of Unix One of the most deeply held beliefs in the culture of *nix (and everything that springs from it) is that the steep learning curve pays off. Yes, the tools seem cryptic and “hard-to-use”, with hardly any crutches for the beginner. But if you stick with it and keep learning you will be rewarded. When you grok the power of economical command lines, composability and extensibility, you’re glad you didn’t run back to the arms of the GUI on the first day. It was worth it. Fantastic Information Architecture and Data Visualization Resources Jan 15 2010 Information architecture can be a daunting subject for designers who’ve never tried it before. Also, creating successful infographics and visualizations takes skill and practice, along with some advance planning. But anyone with graphic design skills can learn to create infographics that are effective and get data across in a user-friendly manner. Below are a collection of resources to get you going down the information architecture and data visualization path. Whether you just want to become more familiar with infographics and data visualizations for occasional use or are thinking of making it a career, the resources below will surely come in handy.

Mike Bostock December 27, 2014Mapping Every Path to the N.F.L. Playoffs December 20, 2014How Each Team Can Make the N.F.L. Playoffs November 5, 2014The Most Detailed Maps You’ll See From the Midterm Elections November 3, 2014How To Scroll The Untold Story of How My Dad Helped Invent the First Mac Jef Raskin, my father, (below) helped develop the Macintosh, and I was recently looking at some of his old documents and came across his February 16, 1981 memo detailing the genesis of the Macintosh. It was written in reaction to Steve Jobs taking over managing hardware development. Reading through it, I was struck by a number of the core principals Apple now holds that were set in play three years before the Macintosh was released.

The Ludologist » A History of Matching tile Games: Am I Missing Something? I am working on an article about the most disrespected and despised game genre there is. That’s right, matching tile games. For that, I am looking at tracing the innovations and developments of the last 20 or so years.