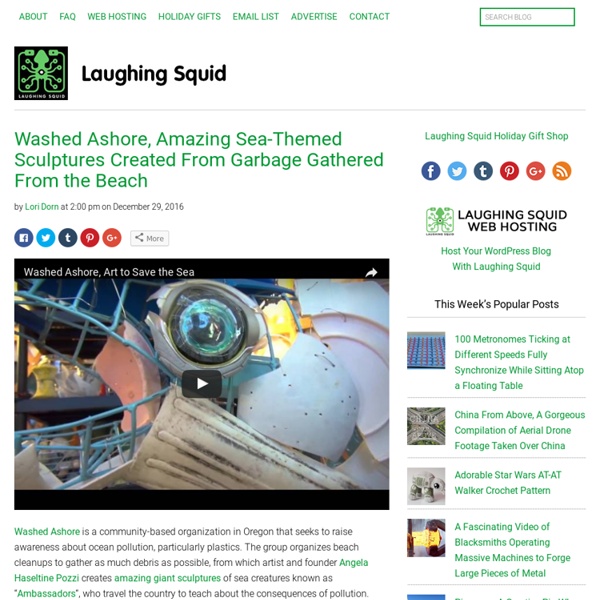 Ant Farmer's Almanac Donald and Melania recently left government service in the U.S. and are relocating to the cosmopolitan Russian capital of Moscow. Local friend Vlad will show them some options in their price range. Option 1: Urban SprawlAn apartment complex outside the city center VLADHere is first abode. Two rooms, half-bath in hallway. From roof with binoculors, you can almost see top of Kremlin.

ultra look ultra look Photo April 20, 2014 49 notes “Helga and Hildegard”, 2013 from the series “Once Upon A Time” by Julia Murakami Water Drop Refractions by Markus Reugels Jul 11, 2012 The Sifter has already featured the amazing work of Markus Reugels, an incredibly talented German photographer that specializes in high-speed and macro photography. His 975-photo Flickr page is a constant source of wonder and inspiration, and I find myself checking in on his latest work often. Much of his photography centers around water drops and the brilliant splashes, reflections and shapes they create. In his series entitled Refractions, Markus takes high-speed photographs of water droplets as they fall in front of a background image.

See 5 Bright Planets in Night Sky—First Time in 8 Years For the first time in almost a decade, sky-watchers this week will be able to see all five naked-eye planets over the course of one night for several nights in a row. The classical naked-eye planets—Mercury, Venus, Mars, Jupiter, and Saturn—can be seen easily without optical aids and so have been known since ancient times. But the quintet hasn't appeared together during a single night since 2004. What's more, this week's parade of planets will be joined in the nighttime skies by the waxing crescent to waxing gibbous moon and the superbright stars Sirius and Canopus. (Related: "New Comet Found; May Be Visible From Earth in 2013." )

Portfolios Doble-exposure paintings from Pakayla Rae Biehn “We have seen double-exposure photography style paintings before, but Pakayla Rae Biehn breathes a new life into the imagery she uses. These subtly erotic pieces are youthful and delicate. Pakayla’s photo realistic works… Surreal Drawings by Ethan Murrow 28 Days Later Survival Guide for Newbies. 28 Days Later Survival Guide for Newbies. Congratulations! You have stumbled across the wonderful hobby of Urban Exploring and have found yourself standing at the gates of the biggest UK Exploring Forum wondering how to proceed. This is quite long but if you are serious about this and want to get on in the community then it is well worth the read. This guide will be split into two parts, the first part is a fairly simple list of do's and don't the second part will explain in a bit more detail. Part I

Apartamento - an everyday life interiors magazine Featuring: Trix & Robert Haussmann, Omar Souleyman, Atsuki Kikuchi, Rose McGowan, Ken Done, Scott Ewalt, Sara Sachs & Frederik Jacobi, Scott Sternberg, Christoph Ruckhäberle, Chung Eun Mo, Aurélien Arbet & Jérémie Egry, Smiljan Radic, Piero Gandini, Jolanthe Kugler, Francesco Zanot, Genesis P-Orridge With Murray Moss’ collection of work by Enzo Mari and a comic by Andy Rementer and Margherita Urbani Stephen Wiltshire - Autistic Artist’s Win Autistic Artist’s Win After only 20 minutes of helicopter riding above New York City, autistic artist Stephen Wiltshire was able to draw the whole city and the skyline in pen, just from memory. All autistic persons has some of the extraordinary abilities, so why do we excommunicate them from the society, instead of trying to understand them and see the world with their eyes. In the eyes of Stephen, it looks great. Cool stuff on other blogs

Animal Rescue Sofia The cold weather combined with so much snow and ice is not only unpleasant for the birds, but also dangerous for their lives. A large part of their food supplies is covered with a thick layer of ice and snow. The unfortunate ones, who remain around us during the winter, have adapted to the bad conditions – you can see them everywhere, bristled up and looking like feather balls. Some birds can slow down their metabolism by lowering the amount of food they require. Funny The rights to broadcast highlights from NCAA March Madness basketball games are held by CBS until the day after the game. This leaves local stations not affiliated with CBS unable to show their viewers clips from the games they’re reporting on. An ABC affiliate in Florida took this problem and had some fun with it, recreating the game’s best moments in their office and playing those clips as the sports anchor read the actual game highlights on the air…

How the Spartans Would Fight COVID-19 – Steven Pressfield A (true) question from antiquity: Why do the Spartans punish with a fine a warrior who loses his helmet or breastplate in combat but punish with death the man who discards his shield? The true answer, from Plutarch: Because helmet and breastplate are worn to protect the individual alone but the shield is borne to protect the whole line.

We Make It Good Petrina Hicks Posted on Wednesday, May 9th, 2012 by Shilo Barnaby Barford