Hunter’s Creative Director Alasdhair Willis on Kate Moss, Progressive Heritage and Living Through Magazines. On September 29, 2015 British brand Hunter has transitioned in recent years from complete dedication to functional rubber boots to mattering on fashion runways, and has done so largely under the creative directorship of Alasdhair Willis—the distinguished brand builder who happens to be wedded to Stella McCartney. 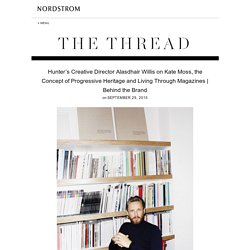 On the phone, Willis told us everything began to change for Hunter when Kate Moss wore Hunter Wellies to Glastonbury in 2005. Fashion capital accrued forthwith. We talked about Hunter walking the tightrope of emphasizing heritage while avoiding calcification, how BLITZ magazine saved a young Willis’s life—and we finally learned once and for all who made the first wetsuits (spoiler: it was Hunter). Shop: Hunter Related: Hunter’s spring ’16 collection.

Fashionistas cause sales of sportswear to sprint: UK sports goods sales estimated to surpass £7 billion in 2016. Move over athletes, it’s the fashion-set who are causing a surge in sportswear sales. 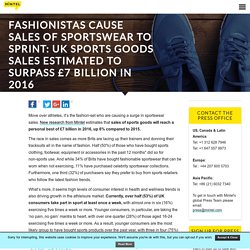 New research from Mintel estimates that sales of sports goods will reach a personal best of £7 billion in 2016, up 6% compared to 2015. The race in sales comes as more Brits are lacing up their trainers and donning their tracksuits all in the name of fashion. Half (50%) of those who have bought sports clothing, footwear, equipment or accessories in the past 12 months* did so for non-sports use. And while 34% of Brits have bought fashionable sportswear that can be worn when not exercising, 11% have purchased celebrity sportswear collections. Furthermore, one third (32%) of purchasers say they prefer to buy from sports retailers who follow the latest fashion trends. What’s more, it seems high levels of consumer interest in health and wellness trends is also driving growth in the athleisure market. Samantha Dover, Retail Analyst at Mintel, said: *12 months to May 2016. Heritage - definition of heritage in English.

Noun 1Property that is or may be inherited; an inheritance. 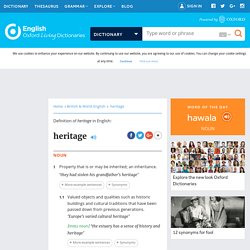 ‘they had stolen his grandfather's heritage’ ‘For the pluralistic West, universal access to heritage is an individual right.’ ‘Brothers, sisters and their children will pay a tax of 0.7 per cent of a heritage portion of over 250,000 leva worth.’1.1Valued objects and qualities such as historic buildings and cultural traditions that have been passed down from previous generations. Heritage. Heritage Meaning in the Cambridge English Dictionary.

Cambridge Dictionary Log in English (UK) Meaning of “heritage” in the English Dictionary british dictionary "heritage" in British English See all translations heritagenoun [ U ] uk ​ /ˈher.ɪ.tɪdʒ/ us ​ /ˈher.ɪ.t̬ɪdʒ/ C2 features belonging to the culture of a particular society, such as traditions, languages, or buildings, that were created in the past and still have historical importance: 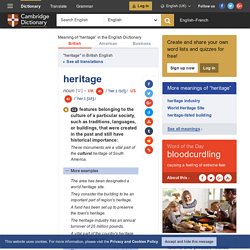 Heritage and Innovation in Luxury Fashion Branding - MA Innovation ManagementMA Innovation Management. Luxury heritage brands function under the delusion that heritage is identical with history rather than representative and impede creativity and innovation, avert all rejuvenation processes and cannot keep up and place themselves strategically within the current and emerging arena. 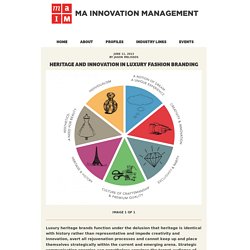 Strategic communication energies can nonetheless convince the target-audience of the brand’s authenticity and bridge the gap between its identity and image. The luxury market has become so dominant to current consumption and interaction activities that it has generated an entire scene of its own. Luxury fashion brands are continually evolving and changing and like all other industries, face a number of different challenges: the continuously expanding globalised market, ever more critical costumer needs, extended competition and evolution in communication are just a few.

The Story So Far. About Us - Heritage and History. From time immemorial, the inhabitants of the Outer Hebrides of Scotland have woven a beautiful and intricate cloth the world knows simply as Harris Tweed. 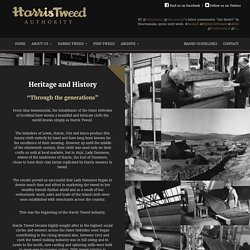 The islanders of Lewis, Harris, Uist and Barra produce this luxury cloth entirely by hand and have long been known for the excellence of their weaving. However up until the middle of the nineteenth century, their cloth was used only on their crofts or sold at local markets, but in 1846, Lady Dunmore, widow of the landowner of Harris, the Earl of Dunmore, chose to have their clan tartan replicated by Harris weavers in tweed. The results proved so successful that Lady Dunmore began to devote much time and effort to marketing the tweed to her wealthy friends further afield and as a result of her enthusiastic work, sales and trade of the island cloth were soon established with merchants across the country.

Is “Heritage” the New “Vintage”? Fashion’s favorite new word seems to be “heritage,” as in “Heritage Collection.” 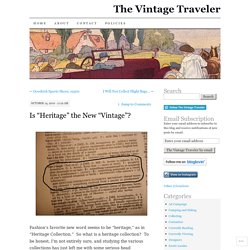 So what is a heritage collection? To be honest, I’m not entirely sure, and studying the various collections has just left me with some serious head scratching. To look at the above definition, you might think that a heritage collection is one based on what the company has produced in the past and has passed down to the present day, and in some companies this seems to be the case.

This involves going into the company archives and pulling out the successes of the past. Other, newer companies, are also sneaking heritage into their clothing lines and descriptions. Maybe the most puzzling use of the word is that by Banana Republic. So maybe now vintage sellers can have their word back.