Marketers Don't Wait for Pokemon Go's Sponsored Locations. Brands aren't waiting for Pokémon Go to activate its promised in-game advertising, not when the craze is white-hot today -- and could burn out tomorrow. 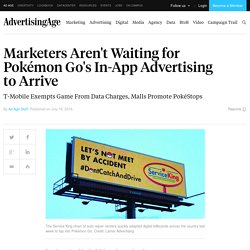 Marketers from T-Mobile to Simon Malls are capitalizing on the smartphone game, which sends players roaming the real world to catch virtual creatures like Jigglypuffs and grab virtual objects. Niantic, the Google spinoff that developed the game, says it will let marketers pay to become locations that will attract players. It will charge marketers by the visit, the way search ads charge per click. The McDonald's name and logo are already embedded in the app's Android code, observers said last week, as Gizmodo reported. But there was no sign of sponsored locations in the game yet, or of negotiations to sell them. Can Netflix Survive in the New World It Created? This was around the time that network executives started to recognize the threat that Netflix could eventually constitute to them. 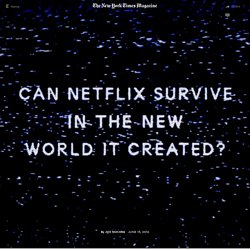 “Five years ago,” says Richard Greenfield, a media and technology analyst at BTIG who happens to be Netflix’s most vocal proponent on Wall Street, “we wrote a piece saying that the networks shouldn’t license to Netflix because they were going to unleash a monster that would undermine their business.” No one cooks anymore — Quartz. Well-off kids who don’t have to work or take care of a sibling during the summer can embark on elaborate journeys to find or foster their passion. 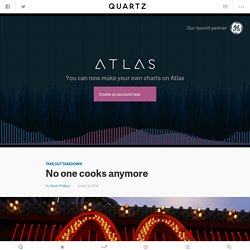 They can volunteer for an HIV program in Africa, study health care in the Caribbean or immerse themselves in Mandarin in China. Hollywood Has a Big Millennial Problem. Sequels have been the lifeblood of the movie business for more than a decade. 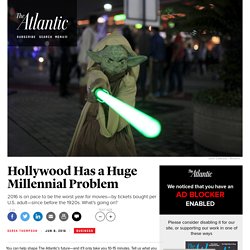 In 2011, the seven top films were all sequels, including Fast 5 and the final Harry Potter installment. State of the Digital Nation 2016 - Marvel. In 2013, we explored the state and future of the digital consultancy industry, posing the question “How, When and Where Will The First Truly Great Digital Design Studio Emerge? 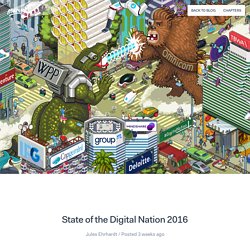 “. Three years later in 2016, enough time has passed to discern patterns from trends. The collapse of parenting: Why it’s time for parents to grow up. Young girl shouting to camera. 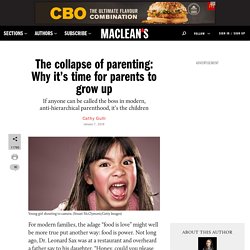 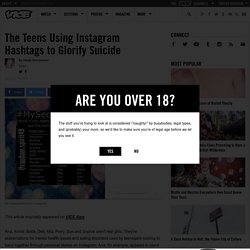 They're abbreviations for mental health issues and eating disorders used by teenagers looking to band together through personal stories on Instagram. How virtual reality is going to change our lives. Palmer Luckey, photographed exclusively for the Telegraph Magazine at Facebook's headquarters in Menlo Park, California, December 2014. 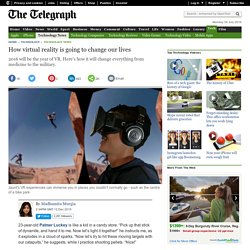 Digital addiction is the world’s next great health crisis. A recent Atlantic piece introduces us to Griffin, a teenage addict from California. 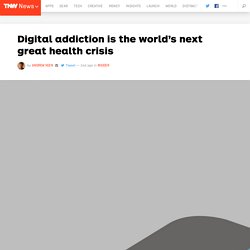 Poor Griffin. He was woken up in the middle of the night, thrown on a plane and driven out to the Utah desert to start a rehab program. His addiction? The internet. How virtual reality is going to change our lives. Suicide on Campus and the Pressure of Perfection. Pedal power - the unstoppable growth of cycling. The 10 most creative, inventive commercials of 2015. It's never been easier to ignore advertising. 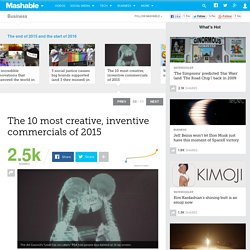 Between the growing number of television cord-cutters, the rise of ad blockers and the ongoing struggle to effectively connect with people on their mobile devices, there's no longer a guarantee that anyone will look at the things advertisers make. The captive audience they once enjoyed in America's living rooms is fading fast — a victim to all-consuming changes in the ways people watch television, read the news and browse the web.

The big Christmas giveaway: Are shops discounting too early? Image copyright Getty Images There's only a few days to go until Christmas day and the festive shopping spree is in full swing. Many analysts are predicting the best ever sales for retailers this season. In contrast, some are warning the fact that so many shops have started their sales - well ahead of the traditional Boxing Day sell-off - bodes ill for the sector's performance. Could 2015 turn out to be the worst ever festive season for retailers? Disney’s smartwatch prototype can identify and track everything you touch. Disney Research and Carnegie Mellon University have hacked together a proof-of-concept smartwatch that uses electromagnetic noise profiles to detect, in real-time, when the wearer is touching an item.

The group calls the idea "EM-Sense. " Many everyday objects give off some amount of electromagnetic (EM) noise, and when your squishy, conductive body comes into contact with an item, its EM signals enter your body. Welcome to the internet of paranoia. Describing the path of technological progress, Marcelo Rinesi likes to point out an early 19th century drawing by a paranoid schizophrenic Welsh man named James Tilly Matthews. INFOGRAPHIC: Why indoor air pollution is a big problem and what you can do to protect yourself. Did you know that indoor air may be two to five times more polluted than outdoor air? Indoor air pollution is a problem that is often overlooked, but can cause serious damage to your health.

While stories of outdoor air pollution is what typically grabs headlines, it’s the indoor pollutants that are more likely to get people sick worldwide, causing symptoms such as fatigue and headaches. These pollutants can be found all throughout the home and can be naturally occurring, like mold, or come from chemicals in synthetic products. Air Filter Buy created an infographic that explores the risks of indoor air pollution and how you can protect yourself against the indoor pollutants. + Air Filter Buy. You Are Either Uber or You're Being Ubered. The Shady Politics of Big Soda. In recent weeks, Democratic frontrunner Hillary Clinton has been standing on her head to appeal to young voters and make herself more relatable, mounting something like a charm offensive in the process. With Clinton’s most viable opponent, Vermont Senator Bernie Sanders, amassing a disproportionate share of the youth vote (a July YouGov poll, found that 40 percent of voters aged 29 or younger backed Clinton, compared to 37 percent who backed Sanders) and beating her on the relatable front, the Clinton campaign is trying desperately to stay out ahead.

Sony Life Space UX hands on. This Man Is About to Put a Robot in Your Pocket. Why do people worship other famous people? - Quora. The $5 Billion Battle For The American Dinner Plate.