Karl Lagerfeld on the State of Fashion: 'It's a Mess' Karl Lagerfeld and Silvia Fendi at Fendi's Autumn/Winter 2016 show | Source: Indigital MILAN, Italy — As the fashion industry continues to debate when and how to engage consumers — and the merits of direct-to-consumer fashion shows, in particular — Karl Lagerfeld spoke to BoF about his own ideas on how direct-to-consumer strategies might co-exist with a more traditional approach to staging runway shows. 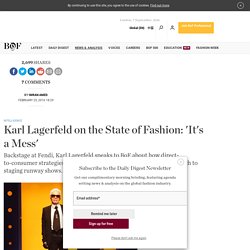 "It's a mess," said Lagerfeld backstage after the Fendi show, when asked about the lack of consensus amongst members of the fashion industry in the US, UK and Continental Europe on the value of consumer-facing fashion shows, which have been met with considerably more enthusiasm in New York and London than in the European fashion hubs of Milan and Paris, where the president of the Fédération Française de la Couture du Prêt-à-Porter des Couturiers et des Créateurs de Mode, Ralph Toledano, recently rejected the idea of aligning fashion shows with retail drops. Selfridges will launch a gender-neutral pop-up department. There's change in the air, and Selfridges is one of the first to sense it. 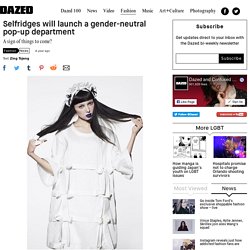 The London luxury retailer is sweeping aside cultural norms and launching a gender-neutral pop-up department that will include spaces on three of its four floors. It's called Agender. The unisex experience won't be limited to London, either. Selfridges outlets in Manchester and Birmingham will also feature gender neutral spaces. "We want to take our customers on a journey where they can shop and dress without limitations or stereotypes," the store said in a statement. With girls appearing on the menswear runways (see: Gucci) and Acne trumpeting its pro-woman credentials with scarves reading "Gender Equality", there's probably never been a better time for a department store like Selfridges to try something new. So how committed is Selfridges to its theme?

Selfridges has also lined up exclusive launches with Body Map, Nicopanda, Rad Hourani, and VFiles. Inside Selfridges' radical, gender-neutral department store. We live in a world where Facebook and Google+ have introduced "infinite" gender options for users, trans models like Andreja Pejic and Hari Nef are burning up the runway; and designers like Hood By Air and Telfar break new ground in fashion every day. 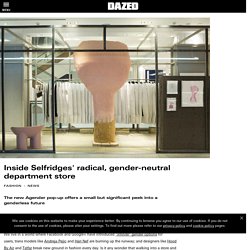 Is it any wonder that walking into a store and only heading for your gender-assigned aisle is starting to feel a little passé? Enter Selfridges latest initiative, Agender, a pop-up department that aims to create a "genderless shopping experience" within the London department store. I went down to visit Agender on the opening day to see what a gender-neutral store actually looks like. Is it lightly watered by the tears of queer unicorns; adorned with the statues of LGBT heroes and feminist icons who sought to destroy gender stereotypes at every turn?

Does a giant, kindly bust of Judith Butler look over you and your gender non-conforming boyfriend as you peruse unisex Stan Smiths and HBA sweatshirts? US Retail Sales Point to Strong Domestic Demand. WASHINGTON, Japan — US retail sales rose strongly in May as Americans bought automobiles and a range of other goods, even as they paid more for gasoline, suggesting that economic growth was gaining steam despite a sharp slowdown in job creation. 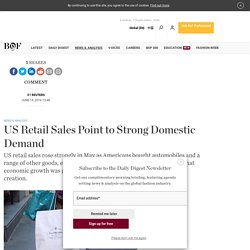 Other data on Tuesday hinted at a steady build-up of inflation pressures, with import prices recording their largest increase in just over four years in May as the drag from a strong dollar and lower oil prices fades. "As has been the case in the prior two years, the modest first-quarter disappointment in consumer spending now appears to be a short-lived soft patch," said Michael Feroli, an economist at JPMorgan in New York. "This number also lends credence to the idea that the big miss on May payrolls may have been sending an overly pessimistic signal on growth. " The Commerce Department said retail sales increased 0.5 percent last month after surging by an unrevised 1.3 percent in April. Strong Consumer Spending Eyed. Beyoncé sells 'Boycott Beyoncé' merchandise as she kicks off 'Formation' world tour. Leave it to Beyoncé to put a positive, commercial spin on a negative campaign against her. 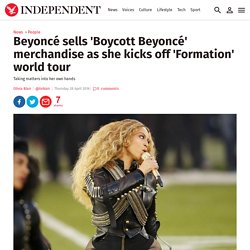 After a Miami police union called for a boycott on the singer in response to her "Formation" video and politically charged performance at the Super Bowl, Beyonce is selling "Boycott Beyonce" merchandise at her concerts. In the song, she sings: “You know you that b*tch when you cause all this conversation. Always stay gracious, best revenge is your paper,” which seems to be exactly what she's doing. Eager fans who attended the opening concert of her "Formation" world tour in Miami have been sharing pictures of the merchandise.

In February, Beyoncé got everyone talking when she released the video showing herself on top of a New Orleans police car submerged in flood water as a black child dances in front of a row of policeman who later put their arms up in surrender, in an allusion to police brutality in America. Aside from the t-shirts, the singer only responded to the criticism last month.