Future scenarios and Trends to watch 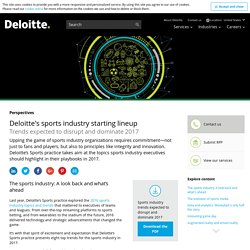 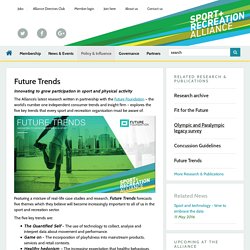 Featuring a mixture of real-life case studies and research, Future Trends forecasts five themes which they believe will become increasingly important to all of us in the sport and recreation sector. The five key trends are: The Quantified Self – The use of technology to collect, analyse and interpret data about movement and performance.Game on – The incorporation of playfulness into mainstream products, services and retail contexts.Healthy hedonism – The increasing expectation that healthy behaviours should be fun.

Download the report below. 10 Sports Industry Trends for 2016. According to Dr. 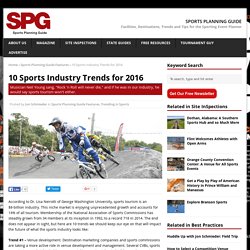 Lisa Neirotti of George Washington University, sports tourism is an $8-billion industry. This niche market is enjoying unprecedented growth and accounts for 14% of all tourism. Membership of the National Association of Sports Commissions has steadily grown from 34 members at its inception in 1992, to a record 718 in 2014. The end does not appear in sight, but here are 10 trends we should keep our eye on that will impact the future of what the sports industry looks like: Trend #1 – Venue development. Trend #2 – Management structures are evolving. Trend #3 – Social media evolves. Trend #4 – Usage of volunteers. Trend #5 – Board governance. Trend #6 – Bid fees. Trend #7 – Third party housing. Trend #8 – Enhanced fan and participant experiences. Trend #9 – Legacy projects. Trend #10 – Sponsors as partners. Five Trends Shaping the Future of Sports.

During the second annual Stanford Graduate School of Business Sports Innovation Conference, leaders from all corners of the sports world gathered to share their insights on pushing the boundaries of the industry. 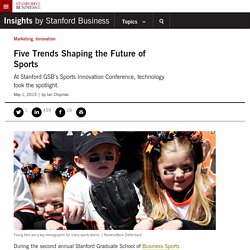 From building winning traditions on the backbone of technology to harnessing the dynamics between fan and franchise, teams must have a thirst for innovation to compete — both on the field and in people’s hearts — in the 21st century. Here are a few of the trends that are shaping the future of sports, today. Virtual Training is Becoming Reality Virtual training has always been more fantasy than reality in sports.

Attempts to train football players with virtual reality, or VR, “has been going on for 20 years,” said Stanford head football coach David Shaw. But the team behind STRIVR Labs, a product of Stanford’s Virtual Human Interaction Lab, may have cracked the code. Our Futures report web without references. Health sub report our futures. Pokemon Go: A glimpse at the future of technology and physical literacy - Active For Life. Pokemon is once again sweeping the world by storm. 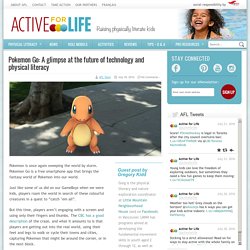 Pokemon Go is a free smartphone app that brings the fantasy world of Pokemon into our world. Just like some of us did on our GameBoys when we were kids, players roam the world in search of these colourful creatures in a quest to “catch ‘em all”. But this time, players aren’t engaging with a screen and using only their fingers and thumbs. The CBC has a good description of the craze, and what it amounts to is that players are getting out into the real world, using their feet and legs to walk or cycle their towns and cities, capturing Pokemon that might be around the corner, or in the next block. Five World Wide Trends in Sport which you ignore at your peril. Having visited more than 30 countries in four continents in the past few years and spent time with sports leaders, coaches, athletes, sponsors, sports scientists, sports academics, sports medicine practitioners, sports administrators, government funding agencies and other sports professionals in many of the world’s leading sports systems,five world wide trends in society (and by extension in sport) have become very clear and are screaming so loud that they can no longer be ignored. 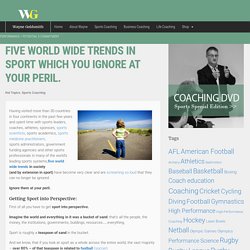 Ignore them at your peril. Getting Sport into Perspective: Jennie Price: Sport’s moment is now. Sport can be a powerful force for good. 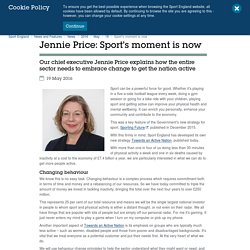 Whether it's playing in a five-a-side football league every week, doing a gym session or going for a bike ride with your children, playing sport and getting active can improve your physical health and mental wellbeing. It can enrich you personally, enhance your community and contribute to the economy. Sporting Future ACCESSIBLE. Trends Issues and Risks. Futurology. Superdiversity has reached critical mass - it's New Zealand's future. Mai Chen looks at the challenges superdiversity poses New Zealand in the kick-off to a new Herald series New Zealand's defining issue through the coming decades will be, not diversity, but superdiversity. 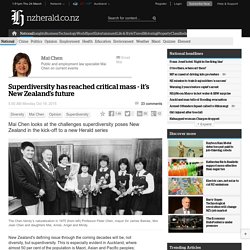 This is especially evident in Auckland, where almost 50 per cent of the population is Maori, Asian and Pacific peoples; where 44 per cent were not born in New Zealand; and where there are over 200 ethnicities, and 160 languages spoken. By 2038, on Statistics NZ projections, 51 per cent of New Zealanders will be Asian, Maori and Pasifika, although 66 per cent will still identify as European due to New Zealanders with multiple ethnicities.

New Zealand's superdiversity has reached a critical mass; never before has New Zealand had living here such a large number of people who were not born here. The Future of New Zealand Sport. New Zealand 2040 - Looking towards the future - The Pulse NZ. Who, or what, are you talking to today? 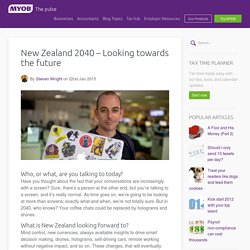 Have you thought about the fact that your conversations are increasingly with a screen? Sure, there’s a person at the other end, but you’re talking to a screen, and it’s really normal. As time goes on, we’re going to be looking at more than screens; exactly what and when, we’re not totally sure. But in 2040, who knows? Your coffee chats could be replaced by holograms and drones. Future New Zealand - Massey University. The dawn of 5G telecommunications The roll-out of 5G, the fifth generation of wireless broadband technology, is just around the corner. 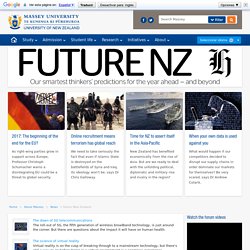 But there are questions about the impact it will have on human health. The science of virtual reality Virtual reality is on the cusp of breaking through to a mainstream technology, but there's still a way to go before being in a virtual environment is a seamless experience. Reaching for the stars For the first time young Kiwis can see tangible prospects in the space industry; Associate Professor Johan Potgieter reckons New Zealand's future as a space nation looks bright.

Secure housing for an ageing population. The Future of Sports. Mega Trends, Mega Announcements by the Minister for Sport, and a Mega Fast Special General Meeting! - Sport NSW. It was great to see so many NSW Sport leaders on Wednesday night at the Sport NSW networking event at WatervieW in Bicentennial Park. Leading Times in Changing Times Internationally acclaimed award-winning social researcher, futurist and best-selling author Mark McCrindle provided a fascinating insight into the mega, social, generational, cultural and technological trends impacting on the way we lead, deliver, communicate and engage in sport.

The diversity of our generations was put on display. We heard about our aging population and considered how activity can be maintained for life. By 2020 there will be more Australians over 60 than under 20 years. Gen Z who come after Y, "speak a different dialect of the English language". Gen Z no longer ‘Googles,’ they rather watch than read so prefer ‘YouTube’. And what about the Alpha Generation or Generation Glass? So the question left to us now is, how do we engage these generations? Sport - batteries not required! 1. Research Resources.

Meet Alpha: The Next ‘Next Generation’ Photo For professional trend forecasters, a generation (as in Generation X, or Y) is less a collection of individuals than a commodity: to be processed into a manufactured unit, marketed and sold to clients. To get there first and define the next next generation is like staking a claim in a gold rush. Our Futures « 2014 « Papers « Expert Advice.

Ko te pae tata, whakamaua, kia tīnā, Ko te pae tawhiti, whaia, kia tata – Secure the horizons that are close to hand and pursue the more distant horizons so that they may become close Our Futures panel chair Professor Gary Hawke FRSNZ explains the purpose and process of the report and shares some of the key findings. Return to top Report summary. What comes after Generation Z? Introducing Generation Alpha. Gen Zeds are the most formally educated generation in Australian history – not only have they started their schooling younger, they are also projected to stay in it for longer. Whilst 1 in 10 of the Builders generation have a university degree, 1 in 5 Baby Boomers, 1 in 4 Generation Xers and 1 in 3 Gen Ys, it is projected that 1 in 2 Gen Zeds will be university educated. With the increased focus on formal education and the increased time spent behind screens and on digital devices, it is unsurprising that they live largely indoors; after all, their parents place priority on homework, coaching and extra-curricular activities over a carefree childhood.

These sedentary lifestyles are having an impact on our Gen Zeds – based on the current trends, it is projected that in 2027, when all Gen Z have reached adulthood, 77.9% of males and 61.2% of females will be overweight or obese. The Zeds are up-ageing because they are growing up faster.