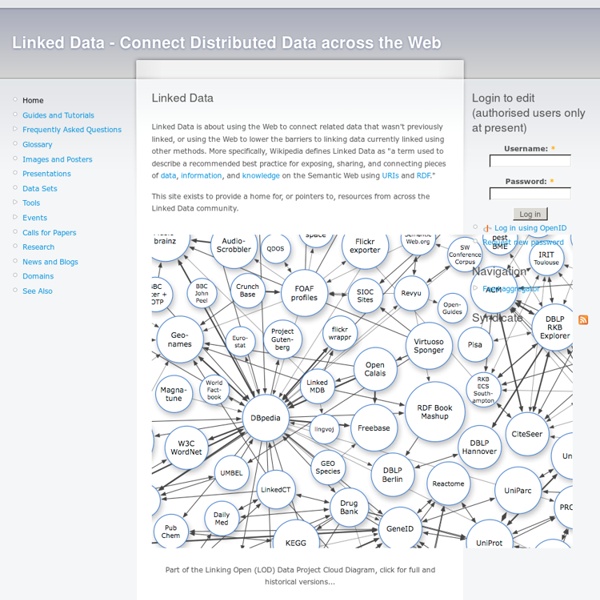 Linked Data is about using the Web to connect related data that wasn't previously linked, or using the Web to lower the barriers to linking data currently linked using other methods. More specifically, Wikipedia defines Linked Data as "a term used to describe a recommended best practice for exposing, sharing, and connecting pieces of data, information, and knowledge on the Semantic Web using URIs and RDF." This site exists to provide a home for, or pointers to, resources from across the Linked Data community. Part of the Linking Open (LOD) Data Project Cloud Diagram, click for full and historical versions...

Debt to the Penny (Daily History Search Application) You are in: Individual | Institutional | > Government Home › Government › Reports › Public Debt Reports › Debt to the Penny Log in now Set up an account The Debt to the Penny and Who Holds It ( Debt Held by the Public vs. IsaViz Overview News IsaViz and Java 1.6 (2007-10-21) IsaViz 2.x is not compatible with Java 1.6 or later. It is recommended to download IsaViz 3.0 which does work with any version of Java. An alpha release is available (see Download section), which should be as stable as IsaViz 2.1 except for the new, still under development, Fresnel and FSL features. IsaViz and GraphViz (2007-05-23)

About rich snippets and structured data - Webmaster Tools Help Rich snippets (microdata, microformats, RDFa, and Data Highlighter) Snippets—the few lines of text that appear under every search result—are designed to give users a sense for what’s on the page and why it’s relevant to their query. If Google understands the content on your pages, we can create rich snippets—detailed information intended to help users with specific queries.

Thinkmap SDK The Thinkmap SDK enables organizations to incorporate data-driven visualization technology into their enterprise Web applications. Thinkmap applications allow users to make sense of complex information in ways that traditional interfaces are incapable of. The Thinkmap SDK (v. 2.8) includes a set of out-of-the-box configurations for solving common visualization problems, as well as new visualization techniques for customizing data displays. We have designed Thinkmap to be lightweight, fast, easily extensible, and able to connect seamlessly to a wide variety of data sources. Thinkmap is composed of two primary components:

Manual of Style (linking) Linking through hyperlinks is an important feature of Wikipedia. Internal links are used to bind the project together into an interconnected whole. Interwiki links bind the project to sister projects such as Wikisource, Wiktionary, and Wikipedia in other languages; and external links bind Wikipedia to the World Wide Web. Appropriate links provide instant pathways to locations within and outside the project that are likely to increase readers' understanding of the topic at hand. When writing or editing an article, it is important to consider not only what to put in the article, but what links to include to help the reader find related information, as well as which other pages should carry links to the article.

ISO 9660 ISO 9660 (also known as ECMA-119), also referred to as CDFS (Compact Disc File System) by some hardware and software providers, is a file system standard published by the International Organization for Standardization (ISO) for optical disc media. It aims at supporting different computer operating systems such as Windows, classic Mac OS, and Unix-like systems, so that data may be exchanged. History[edit] ISO 9660 traces its roots to the High Sierra Format file system. High Sierra arranged file information in a dense, sequential layout to minimize nonsequential access by using a hierarchical (eight levels of directories deep) tree file system arrangement, similar to UNIX and FAT. To facilitate cross platform compatibility, it defined a minimal set of common file attributes (directory or ordinary file and time of recording) and name attributes (name, extension, and version), and used a separate system use area where future optional extensions for each file may be specified.

Tools - Semantic Web Standards Overview This Wiki contains a collection of tool references that can help in developing Semantic Web applications. These include complete development environments, editors, libraries or modules for various programming languages, specialized browsers, etc. The goal is to list such tools and not Semantic Web applications in general (the interested reader may consider looking at the W3C SW Use Case Collection for those.)

RDF - Semantic Web Standards Overview RDF is a standard model for data interchange on the Web. RDF has features that facilitate data merging even if the underlying schemas differ, and it specifically supports the evolution of schemas over time without requiring all the data consumers to be changed. RDF extends the linking structure of the Web to use URIs to name the relationship between things as well as the two ends of the link (this is usually referred to as a “triple”). RDFa, Drupal and a Practical Semantic Web In the march toward creating the semantic web, web content management systems such as Drupal (news, site) and many proprietary vendors struggle with the goal of emitting structured information that other sites and tools can usefully consume. There's a balance to be struck between human and machine utility, not to mention simplicity of instrumentation. With RDFa (see W3C proposal), software and web developers have the specification they need to know how to structure data in order to lend meaning both to machines and to humans, all in a single file.

Canadian Journal of Sociology The Canadian Journal of Sociology publishes rigorously peer-reviewed research articles and innovative theoretical essays by social scientists from around the world, providing insight into the issues facing Canadian society as well as social and cultural systems in other countries. The journal also features a lively debate/commentary section encouraging the intensive exchange of ideas, along with regular sections such as “Notes on Society” that address topical issues of the day from a social science point of view and “Notes on the Discipline” designed to discuss a variety of issues encountered in the course of the sociological analysis of modern society. Each issue of the journal also has a comprehensive book review section. Announcements Vol 39, No 1 (2014) Table of Contents