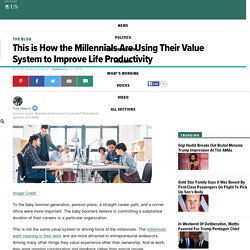 The baby boomers believe in committing a substantial duration of their careers to a particular organization. UK government expenditure 2017 - Pie Charts Tables. On July 21, 2016, HM Treasury published its Public Expenditure Statistical Analyses (PESA) for 2016. ukpublicspending.co.uk uses the PESA tables of public spending at the "sub-function" level as its major data source for UK public spending.ukpublicspending.co.uk has now updated its spending tables using data from PESA 2016. 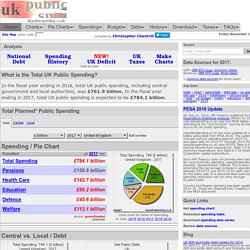 The update includes outturn spending data for 2015-16, and plans data for 2016-17 through 2019-20. ukpublicspending.co.uk uses PESA's Table 6.4 for Central Government expenditure, Table 7.4 for Local Authority expenditure, and Table 8.3 for Public Corporation capital expenditure.Since HM Treasury does not provide plans estimates for Local Authority spending, ukpublicspending.co.uk provides "guesstimates" instead. This is done by extending the percentage increase in spending between 2014-15 and 2015-16 for each sub-function for the plans year. Twitter Gives Online Hate Speech Its Biggest Social Media Platform — Facebook and Google Are Better - News.

During the last months, anti-Semitic attacks and trolling has risen to seemingly unprecedented levels on social media sites. 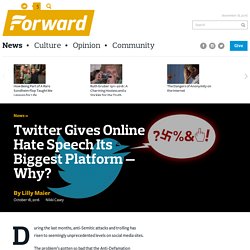 The problem’s gotten so bad that the Anti-Defamation League created a task force combating online hate speech. (Their first report will be released this Wednesday.) EU student funding in UK to remain same in 2017 despite Brexit vote. Chancellor Philip Hammond 'still aspires for surplus' Image copyright Getty Images Philip Hammond is expected say in his Autumn Statement he will still aim to achieve a budget surplus, despite abandoning a formal target by George Osborne to do so by 2020. 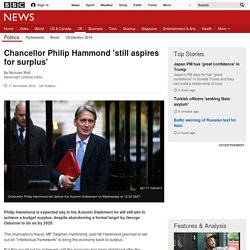 Scots and Welsh can have say in Brexit court case. Image copyright Supreme Court The Scottish and Welsh governments are to be allowed to intervene in the Supreme Court battle over how Brexit should be triggered. 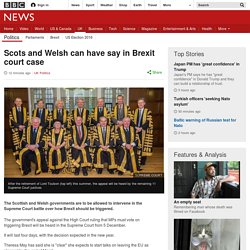 The government's appeal against the High Court ruling that MPs must vote on triggering Brexit will be heard in the Supreme Court from 5 December. It will last four days, with the decision expected in the new year. Forbes Welcome. Model Diversity Report: Fall 2016 Ad Campaigns - theFashionSpot. “The Girls” in Marc Jacobs Fall 2016; Image: Courtesy This has been a banner year for diversity. 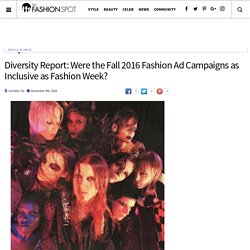 The Spring 2017 presentations showed us that calls for inclusivity on the runway did not fall on deaf ears. New York Fashion Week was the most body positive in history; catwalks across the Western world featured more models of color than ever before. Red carpet mainstay Christian Siriano brought plus-size models into the high-fashion fold. Chromat featured four transgender models (along with curvy and disabled models) in its biannual celebration of unconventional beauty and architectural swimwear.

That said, the total percentage of models of color castings on the runways barely broke 25 percent. Prada Fall 2016 Print Ad Campaign; Image: Courtesy Given these findings, we expected the Fall 2016 print ads to tell a similar story of diversity gains in the face of ongoing discrimination. How Diversity Changed Fashion. At Balmain's most recent Paris Fashion Week show, Creative Director Olivier Rousteing was hammering home that you can't expect to build a global fashion brand without embracing global casting. 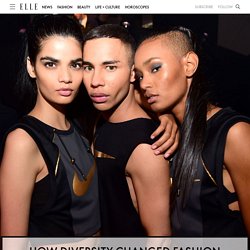 His models, all different in heritage and ethnicity, came from all over the world: Britain (Jourdan Dunn and Lily Donaldson);Tanzania (Herieth Paul); Dominican Republic (Lineisy Montero, Genesis Vallejo and one of August ELLE's cover girls, Ysaunny Brito); Jamaica (Tami Williams); the Netherlands (Maartje Verhoef); India (fellow August ELLE cover girl, Bhumika Arora); Angola (Maria Borges); Brazil (Alessandra Ambrosio) and China (Cong He and Ming Xi), to name just a few of the destinations that were championed. YouTube: Marketers must keep it real when portraying diversity. Marketers must “switch it up” but not entirely disrupt the reality of what the consumer relates to in order to stay diverse, says Google’s newly appointed global director of diversity Baroness Oona King. 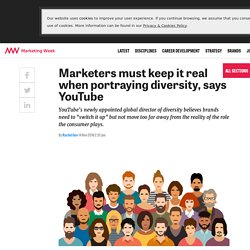 Speaking at an event hosted by YouTube last week, King said brands should switch round stereotypes, but not in a manner that moves entirely away from a representation the viewer resonates with. “There are lots of things we could do, but the first one is just be aware, be aware of stereotypes you might consciously or unconsciously be perpetuating. And take small steps that don’t cost you anything and can really make a big change,” she said. Google to Expand London Campus Despite Brexit Questions - Bloomberg. Google is going ahead with delayed plans to expand its London offices, saying it will build a 10-story building on the site in a move that the U.K. government called a vote of confidence in the country’s post-Brexit future. 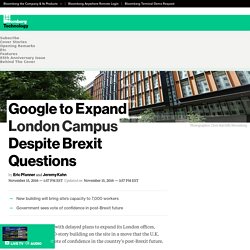 The company, the largest unit of Alphabet Inc., said it would be able to house as many as 7,000 workers at the London campus after the expansion -- 3,000 more than a spokesman said it currently employs in the U.K. Google Chief Executive Officer Sundar Pichai described the plan as a sign of the company’s commitment to the country. “Here in the U.K., it’s clear to me that computer science has a great future with the talent, educational institutions, and passion for innovation we see all around us,” he said in a statement. Angela Merkel suggests she is willing to compromise on free movement in the wake of Brexit. We must rethink globalization, or Trumpism will prevail.

Let it be said at once: Trump’s victory is primarily due to the explosion in economic and geographic inequality in the United States over several decades and the inability of successive governments to deal with this. 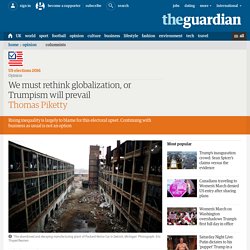 Both the Clinton and the Obama administrations frequently went along with the market liberalization launched under Reagan and both Bush presidencies. At times they even outdid them: the financial and commercial deregulation carried out under Clinton is an example. What sealed the deal, though, was the suspicion that the Democrats were too close to Wall Street – and the inability of the Democratic media elite to learn the lessons from the Sanders vote.

Hillary won the popular vote by a whisker (60.1 million votes as against 59.8 million for Trump, out of a total adult population of 240 million), but the participation of the youngest and the lowest income groups was much too low to enable key states to be won. UK unemployment falls to 11-year low. Image copyright PA. Obama Says Brexit and Trump Both Powered by Globalization Fears - Bloomberg Politics. President Barack Obama said that fears of globalization and suspicions of government institutions and elites powered both the U.K.’s vote to exit the European Union and Donald Trump’s election as the next U.S. president. "Globalization combined with technology, combined with social media and constant information, has disrupted people’s lives" in both concrete and psychological ways, Obama said at a news conference on Tuesday in Athens with the Greek prime minister, Alexis Tsipras.

"There’s no doubt that has produced populist movements both on the left and the right in many countries in Europe. The success of both Donald Trump and Democrat Bernie Sanders in the U.S. elections also reflected populist movements, he said. "Sometimes that gets wrapped up in issues of ethnic identity or religious identity or cultural identity," he said. History tells us what may happen next with Brexit & Trump – Medium. It seems we’re entering another of those stupid seasons humans impose on themselves at fairly regular intervals. Theresa May has promoted women. But she’s a Tory first and a feminist second. How Brexit Could Impact Diversity in Recruitment - ThisWay Global. United Kingdom’s (UK) historical departure from the European Union (EU) has resulted in many people worrying about their jobs.