32 Interesting Ways to use an iPod Touch in the Classroom 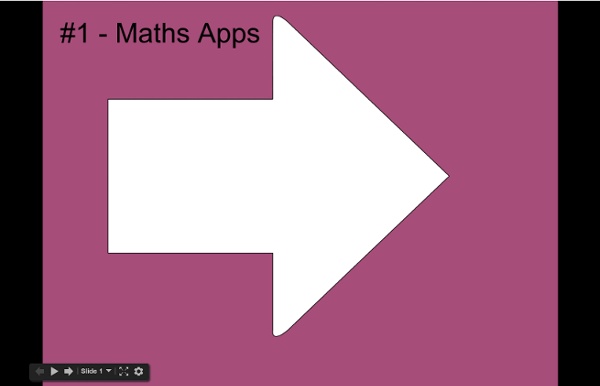 The Odds Ever in Your Favor: Ideas and Resources for Teaching 'The Hunger Games' Updated | May 16, 2012 If you’re like many of the students who post on The Learning Network, you won’t have to consult the Movies section to answer the question, “When will the first film in the ‘Hunger Games’ trilogy come out?” (March 23. These dystopian young-adult novels, which have “pretty much owned” The Times’s children’s series bestseller list for a year and a half, have, like the “Harry Potter” and “Twilight” series before them, enthralled fans of all ages and backgrounds. Many educators see them as a way to both excite avid readers and hook reluctant ones, and have devised imaginative ways to teach with them already. Below, our own Times-inspired ideas, some of which were contributed by “Hunger Games” enthusiast and Learning Network college intern Lily Altavena, who also scoured the Web for wonderful fan-created art and writing and other resources that might inspire. Are your students obsessed? Who is Katniss? Fans hotly debated the casting of Jennifer Lawrence. Do you think Ms.

50 really useful iPad tips and tricks With great new features like two video cameras, a faster processor and a Retina display, the new iPad is the world's best tablet device. It's also fully capable of running the latest version of Apple's iOS operating system and great apps like iMovie and GarageBand. Here we present 50 really useful iPad tips. 10 best tablet PCs in the world today The vast majority of these tips will also work on the original iPad and iPad 2, so owners of any generation of iPad shouldn't feel neglected. For 50 more iPad tips, check out a new iPad app called 100 Tricks & Tips for iPad 2, brought to you by our colleagues on MacFormat. 1. iOS now supports folders. Your iPad will create a folder with both the apps in. 2. Double-clicking the Home button shows you all the apps that are running on your iPad in a bar along the bottom of the screen. 3. The internet got mightily upset when Orientation Lock was replaced with Mute on the iPad during the last iOS update. 4. 5. 6. 7. The iPad supports a VPN connection. 8.

Continuing to Learn with the iPad- Storytelling  In an attempt to document the trials and errors of using a classroom set of 20 iPads in our K-8 school, I am adding a new post to the collection of iPads in the Classroom: 5th Grade- Storykit- Creating a story in Hebrew One of the Hebrew teachers approached me with an interest in having her students create a story book in the target language on the iPads. We chose to test the free app Storykit with this project. Students read a poem by Leah Goldberg called: (That’s Not Me). We had the Hebrew letters added to the iPad keyboard by going into: Settings> General> Keyboard> International Keyboards>Add New Keyboard> Choose Hebrew Once the International keyboard is added, a globe appears on your keyboard. Once the storyboards were finished, students were ready to work with the iPads. I showed students how to go to Microsoft Office ClipArt, search for images and download or take a screenshot and edit the image. Students also used each other to stage scenes from their story to take a photo. Like this:

Ahead.com – Zooming Presentations Written by Mark Brumley Do you love Prezi but want a few more features? Try Ahead.com. In addition to the layer features, Ahead uses scenes to determine the order and zoom level. Give Ahead.com a try and let me know what you think. Mark Brumley (112 Posts) Mark Brumley is an educational technology leader, presenter and founder of Teach Amazing, who has lived and worked around the globe in his commitment to provide authentic learning experiences to enhance the education of 21st Century learners.

iPad Apps How do I get Apps to this device? Or If you are new to the mobile world, what is an App? App or an application is a program that can be installed on to the device. Notes on Selecting Apps: When selecting an app, there is not one app that is perfect for everyone. How should we use technology in assessment? I'm looking for brain-storming ideas. You can either share ideas you've tried, or just half-baked ideas that you think would be interesting. Let's make sure not to bash each other in this post, our objective is to think of as many ways as possible to use technology as a tool in assessment. I'll give 10 ways to start the ball rolling. 1. 2. 3. 4. 5. 6. 7. 8. 9. 10.

The 100 Best Web 2.0 Classroom Tools Chosen By You The Wordle of this list! (Click image to enlarge) One of the most popular posts on Edudemic in 2010 was The 35 Best Web 2.0 Classroom Tools Chosen By You and I felt it might be time for an update to that list for 2011. There were more than 900 submissions but many were duplicates. The Best Resources For Beginning iPad Users Though I haven’t gotten an iPad yet (NOTE: Now I have!), we did get one for my mother-in-law. So, with an eye towards helping her now, and me in the future, I put out a call to readers to their suggested resources as well as hunting for them on my own. You might also be interested in The Best Sites For Beginning iPhone Users Like Me. Here are my choices, and choices suggested by readers (their recommendations are better than mine!) iPad Getting Started is from TC Geeks. The 10 best iOS apps of 2011 comes from The Telegraph. The best iOS apps for children, 2011 is also from The Telegraph. The top 50 iPad apps is from The Guardian. Choosing the Right Keyboard For Your iPad is from Read Write Web. The Best iPad Apps: 10 Essential Apps For The New iPad You Got For The Holidays is from The Huffington Post. Educreations lets you easily create video lessons. Fill Your New Kindle, iPad, iPhone with Free eBooks, Movies, Audio Books, Courses & More is from Open Culture. iPads In The Art Room Melissa A.

Tune-Ups and Teachable Moments - Finding Common Ground Children are not supposed to be perfect all the time. Adults certainly aren't! When I was in seventh grade I had to go to the principal's office. My early teenage brain had gotten the best of me and I was rude to a teacher, which is something that did not please my mom and I heard about it when I got home. The classroom where I made my grave mistake was on the second floor of Queensbury Middle School and the principal's office was on the first floor. The principal talked at me for about five minutes, which seemed like an hour, and I left his office vowing never to get in trouble again. As an elementary school principal, it's interesting to me that students may leave my office feeling the same way that I did in seventh grade. Many parents get embarrassed when their child gets sent to the office, which is human nature. Clearly there are times when students make grave mistakes the require suspension or expulsion, which can provide lessons on another level.