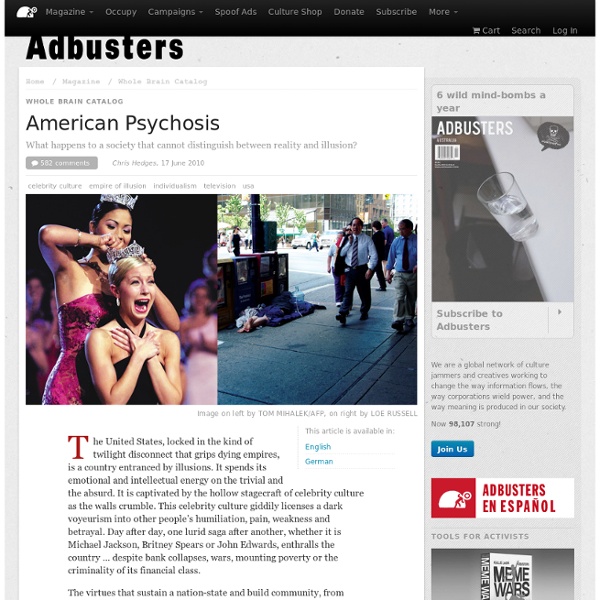 The United States, locked in the kind of twilight disconnect that grips dying empires, is a country entranced by illusions. It spends its emotional and intellectual energy on the trivial and the absurd. It is captivated by the hollow stagecraft of celebrity culture as the walls crumble. This celebrity culture giddily licenses a dark voyeurism into other people’s humiliation, pain, weakness and betrayal. Day after day, one lurid saga after another, whether it is Michael Jackson, Britney Spears [or Miley Cyrus], enthralls the country … despite bank collapses, wars, mounting poverty or the criminality of its financial class. The virtues that sustain a nation-state and build community, from honesty to self-sacrifice to transparency to sharing, are ridiculed each night on television as rubes stupid enough to cling to this antiquated behavior are voted off reality shows. It is the cult of self that is killing the United States.

House panel approves bill forcing ISPs to log users’ web history By Eric W. DolanThursday, July 28, 2011 21:41 EDT The House Judiciary Committee approved legislation on Thursday that would require Internet service providers (ISPs) to collect and retain records about Internet users’ activity. Why Are the French So Determined To Run The IMF – And What Will It Cost You? By Simon Johnson Just a few years ago, eurozone countries were at the forefront of those saying that the International Monetary Fund had lost its relevance and should be downsized. The organization was regarded by the French authorities as so marginal that President Nicolas Sarkozy was happy to put forward the name of a potential rival, Dominique Strauss-Kahn, to become managing director in fall 2007. Today the French government is working overtime to make sure that a Sarkozy loyalist and the leader of his economic team – Finance Minister Christine Lagarde – becomes the next managing director. Why do they and other eurozone countries now care so much about who runs the IMF?

In Conversation: Steven Soderbergh Steven Soderbergh has directed 26 films since his 1989 debut, sex, lies, and videotape — the behind-closed-doors portrait of yuppie Louisiana often credited with kick-starting the indie-film revolution of the nineties, released when he was only 26. In the 24 years since, he’s been a remarkably prolific chameleon, managing arguably more than any other director of his generation to successfully bounce between the low- and high-budget, not only directing but often editing and shooting his own films, each, in its way, an audacious experiment. In one extraordinary three-year streak — 1998 to 2001 — he directed two noirish classics (Out of Sight, The Limey), pulled an Oscar performance out of Julia Roberts (Erin Brockovich), earned an Oscar of his own (Traffic, the same year he was also nominated for Brockovich), and launched a lucrative franchise (Ocean’s Eleven, followed by Twelve and Thirteen).

Osborne met News International chiefs 16 times since election George Osborne met Rebekah Brooks on five occasions in the year following the 2010 general election, according to figures released on Tuesday afternoon, that show how the chancellor cultivated relationships with senior figures at News International. The chancellor, who expressed regret on Monday for recommending Andy Coulson as the Tories' communications chief, met James Murdoch on four occasions, and Rupert Murdoch twice. In total, he attended 16 meetings at which News International executives were present. In Yemen, celebrations and confusion after Saleh leaves A myriad of colors lit up the sky in Yemen's capital, Sanaa, last night. Skip to next paragraph Subscribe Today to the Monitor Click Here for your FREE 30 DAYS ofThe Christian Science MonitorWeekly Digital Edition Celebratory fireworks were launched from Change Square as news broke of Yemeni President Ali Abdullah Saleh’s departure to Saudi Arabia for what the Yemeni government called “medical treatment” resulting from minor injuries it says he sustained during an attack on his presidential compound Friday.

How To Tell If Somebody Loves You Somebody loves you if they pick an eyelash off of your face or wet a napkin and apply it to your dirty skin. You didn’t ask for these things, but this person went ahead and did it anyway. They don’t want to see you looking like a fool with eyelashes and crumbs on your face. They notice these things. They really look at you and are the first to notice if something is amiss with your beautiful visage!

Film criticism: Always declining, never quite falling Daumier, Le mélodrame (1860-64) DB here: Before the Internets, did people fret as much about movie criticism as they do now? The dialogue has become as predictable as a minuet at Versailles. Why the West Can’t Resist This Norway Massacre and Psy-Op The time for justice has come… Kevin Annett is a defrocked priest who has taken-up a second career as a con-artist/grifter. Annett has convinced a bunch of unwitting people that he is the saviour of Indigenous people everywhere, and the only person who is working on their behalf. This is not true- rather, he is using their cause for his own personal gain. Kevin is most famous for his faking of the discovery of a ‘mass grave’ at the Six Nations Reserve in Brandford, Ontario. Apparently, he is pulling the same con at other reserves- one has to feel sorry for all of the people who he is building false hope for.