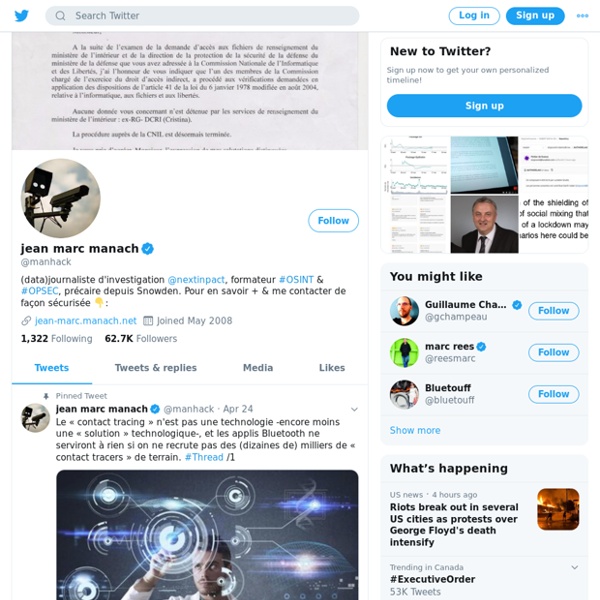 Creating an Effective Sock Puppet for OSINT Investigations – Introduction – Jake Creps Introduction and Philosophy In recent light of the epic failure by Surefire Intelligence to frame Robert Mueller for sexual assault allegations, I feel it’s important to discuss and unpack how to make a good sock puppet for OSINT operations. If you aren’t familiar, just google Jacob Wohl or Surefire Intelligence and you will likely be flooded with information about the scandal. For further details on the unraveling of the socks Wohl made, check out Aric Toler’s threat on Twitter @arictoler from Bellingcat.

Data Is a Toxic Asset Thefts of personal information aren't unusual. Every week, thieves break into networks and steal data about people, often tens of millions at a time. Most of the time it's information that's needed to commit fraud, as happened in 2015 to Experian and the IRS. Sometimes it's stolen for purposes of embarrassment or coercion, as in the 2015 cases of Ashley Madison and the US Office of Personnel Management. The latter exposed highly sensitive personal data that affects security of millions of government employees, probably to the Chinese. The 7 Privacy Tools Essential to Making Snowden Documentary CITIZENFOUR What needs to be in your tool belt if you plan to report on a massively funded and ultra-secret organization like the NSA? In the credits of her newly released CITIZENFOUR, director Laura Poitras gives thanks to a list of important security resources that are all free software. We've previously written about CITIZENFOUR and Edward Snowden's discussion of his motivation to release closely guarded information about the NSA. Here's a closer look at the seven tools she names as helping to enable her to communicate with Snowden and her collaborators in making the film. Tor Tor is a collection of privacy tools that enables users to mask information about who they are, where they are connecting to the Internet, and in some cases where the sites they are accessing are located.

90% of security incidents trace back to PEBKAC and ID10T errors “Apparently, hackers really do still party like it’s 1999,” Verizon said in its 2015 Data Breach Investigations Report (DBIR) regarding how often really old vulnerabilities are exploited and result in data breaches. But the real problem is you. It’s me. It’s each and every one of us as the breakdown of security incidents in 2014 revealed that the “common denominator—accounting for nearly 90% of all incidents—is people.” This is what a Tor Supporter looks like: Laura Poitras The first thing that Laura Poitras has to say about Tor is that she couldn’t have made Citizenfour without it. “There’s no way I would have been able to protect the initial source without using Tor,” she says. “Fundamentally, without Tor and other free software tools I wouldn’t have been able to do the reporting, and the story would not have been broken.” Laura also recalls her own learning process around encryption that allowed her to communicate easily with Snowden when he first contacted her. “I’ve been on a government watch list since 2006,” she says. “In 2010, I was interested in reaching out to Jake Appelbaum around the work he was doing with Tor.

How to Search Twitter - The Best Twitter Search Tricks The Twitter Archiver and Twitter Bots app fire each time a new tweet is found that match your search query. You can write simple search queries (like #Oscars) or more complex query (like obama min_retweets:10 filter:news) that uses one or more Twitter search operators. Here’s a complete list of Twitter search operators that can help you perform more accurate searches on Twitter: from:BarackObama All tweets sent by a particular Twitter user Electrospaces.net: What is known about NSA's PRISM program (Updated: August 19, 2016) Therefore, this article presents almost everything we know about the PRISM program, combining information from my earlier postings and from other media and government sources. It shows that PRISM is not about bulk or mass surveillance, but for collecting communications of specifically identified foreign targets. NSA also has no "direct access" to the servers of companies like Microsoft, Facebook and Google - it's actually a unit of the FBI that picks up data related to specific identifiers.

Who uses Tor? Tor was originally designed, implemented, and deployed as a third-generation onion routing project of the Naval Research Laboratory. It was originally developed with the U.S. Navy in mind, for the primary purpose of protecting government communications. Today, it is used every day for a wide variety of purposes by the military, journalists, law enforcement officers, activists, and many others. Google hacking Basics[edit] One can even retrieve the username and password list from Microsoft FrontPage servers by inputting the given microscript in Google search field: "#-Frontpage-" inurl: administrators.pwd or filetype: log inurl password login Devices connected to the Internet can be found. A search string such as inurl: "ViewerFrame?Mode=" will find public web cameras.

The real story in the NSA scandal is the collapse of journalism Updated June 9 to include details of the Guardian's coverage, a link to the Post's correction policy, and a quote from the Huffington Post. Updated June 10 to include a quote from a follow-up article in the Post directly contradicting its initial claims and another observation after the release of the leaker's identity. On Thursday, June 6, the Washington Post published a bombshell of a story, alleging that nine giants of the tech industry had “knowingly participated” in a widespread program by the United States National Security Agency (NSA). One day later, with no acknowledgment except for a change in the timestamp, the Post revised the story, backing down from sensational claims it made originally.