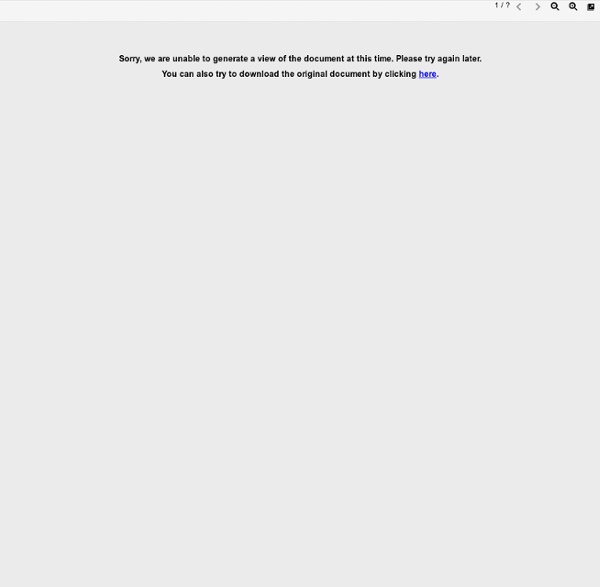 The Internet's Original Sin Ron Carlson’s short story “What We Wanted To Do” takes the form of an apology from a villager who failed to protect his comrades from marauding Visigoths. It begins: What we wanted to do was spill boiling oil onto the heads of our enemies as they attempted to bang down the gates of our village. There’s little suspense in the story—the disastrous outcome is obvious from the first paragraph—but it works because of the poignancy of the apology. The fiasco I want to talk about is the World Wide Web, specifically, the advertising-supported, “free as in beer” constellation of social networks, services, and content that represents so much of the present day web industry. The talk is hilarious and insightful, and poignant precisely for the reasons Carlson’s story is. What we wanted to do was to build a tool that made it easy for everyone, everywhere to share knowledge, opinions, ideas and photos of cute cats. I use the first personal plural advisedly. Cegłowski tells us that it doesn’t matter.

Free PDF Search Engine Cypherpunks (book) Cypherpunks: Freedom and the Future of the Internet is a 2012 book by Julian Assange, in discussion with internet activists and cypherpunks Jacob Appelbaum, Andy Müller-Maguhn and Jérémie Zimmermann. Its primary topic is society's relationship with computer security. In the book, the authors warn that the Internet has become a tool of the police state and that the world is inadvertently heading toward a form of totalitarianism. In the introduction, Assange describes the book as, "not a manifesto. The book is published by OR Books[4] Its content derives from discussions in June 2012 with Appelbaum, Müller-Maguhn and Zimmermann on Assange's TV show World Tomorrow.[5] [6] [7]

Little Brother » Download for Free Official Downloads: Above you’ll find links to downloadable editions of the text of Little Brother. These downloads are licensed under a Creative Commons Attribution-Noncommercial-ShareAlike license, which lets you share it, remix it, and share your remixes, provided that you do so on a noncommercial basis. It’s kind of a tradition around here that my readers convert my ebooks to their favorite formats and send them to me here, and it’s one that I love! Only one conversion per format, first come, first serve. Fan conversions: ePub: EPUB file (Thanks, Hadrien Gardeur!)

CWC Books : Evasion A 288 page novel-like narrative, Evasion is one person's travelogue of thievery and trespassing across the country, evading not only arrest, but also the 40-hour workweek and hopeless boredom of modern life. The journey documents a literal and metaphorical reclamation of an individual's life and the spaces surrounding them—scamming, squatting, dumpstering, train hopping and shoplifting a life worth living and a world worth the fighting for. “. . . then life began, and since then we remember each dumpster, abandoned house, and foot-chase by retail security. At night, after running around, plotting and scheming, our checklist items all crossed out, we paused to think—'What to do tomorrow?' “Evasion offers many beautiful stories about surviving in voluntary squalor that are human and touching, yet liberatory and hopeful at the same time.” the insurgent, October 2001 Bad subjects , January/February 2001 “And the book is a pleasure to read.

How To Become A Hacker Copyright © 2001 Eric S. Raymond As editor of the Jargon File and author of a few other well-known documents of similar nature, I often get email requests from enthusiastic network newbies asking (in effect) "how can I learn to be a wizardly hacker?". If you are reading a snapshot of this document offline, the current version lives at Note: there is a list of Frequently Asked Questions at the end of this document. Numerous translations of this document are available: ArabicBelorussianBulgarianChinese, Czech. The five-dots-in-nine-squares diagram that decorates this document is called a glider. If you find this document valuable, please support me on Patreon. The Jargon File contains a bunch of definitions of the term ‘hacker’, most having to do with technical adeptness and a delight in solving problems and overcoming limits. The hacker mind-set is not confined to this software-hacker culture. If you want to be a hacker, keep reading. 1. 2.

This Creepy App Isn’t Just Stalking Women Without Their Knowledge, It’s A Wake-Up Call About Facebook Privacy This app is meant to all be in good fun, but it's potentially a weapon in the hands of stalkers. “Boy, you sure have a lot of apps on your phone.” “Well, it’s my job.” “What’s your favorite?” “Oh, I couldn’t choose. It was the flush end of a pleasurably hot day — 85 degrees in March — and we were all sipping bitter cocktails out in my friend’s backyard, which was both his smoking room, beer garden, viticetum, opossum parlor and barbecue pit. “Girls Around Me? She turned to our friends, apologetically. “He’s become obsessed with this app. I sputtered, I nevered, and I denied it, but it was true. It’s an app that can be interpreted many ways. And more than anything, it’s a wake-up call about privacy. The only way to really explain Girls Around Me to people is to load it up and show them how it works, so I did. The splash screen elicited laughter all around. “Okay, so here’s the way the app works,” I explained to my friends. Girls Around Me's splash screen (left) and geo-maps interface (right).

Free ebooks - Project Gutenberg Ready Player One: A Novel Hacking the Future of Money: The Book "SMART & STREET SMART"Ha-Joon Chang Professor, Cambridge University"WILL DO A WORLD OF GOOD"Bill McKibben Founder, 350.org "CAN'T REMEMBER THE LAST TIME A BOOK ON FINANCE KEPT ME UP TILL 4"Mari Bastashevski Intrepid photographer of arms dealers"A GUIDE TO GUERILLA FINANCE ANALOGOUS TO THE CIVIL-RIGHTS EQUIVALENTS OF THE '60s. HARK!"A dude on Twitter Who was around during the '60s The Heretic's Guide to Global Finance: Hacking the Future of Money is a friendly guide to taking on the world's most powerful system. Part 1 (Exploring) covers the major financial players, concepts and instruments. It's published by the fantastic Pluto Press, and you can order paperbacks and e-books below. As for me, I'm a campaigner, former derivatives broker, and general economic explorer. "This book provides a unique inside-out look at our financial system, based on the author's unusual personal adventure. Ha-Joon Chang, University of Cambridge, author of 23 Things They Don't Tell You About Capitalism