A dream treehouse · Sheepy Me 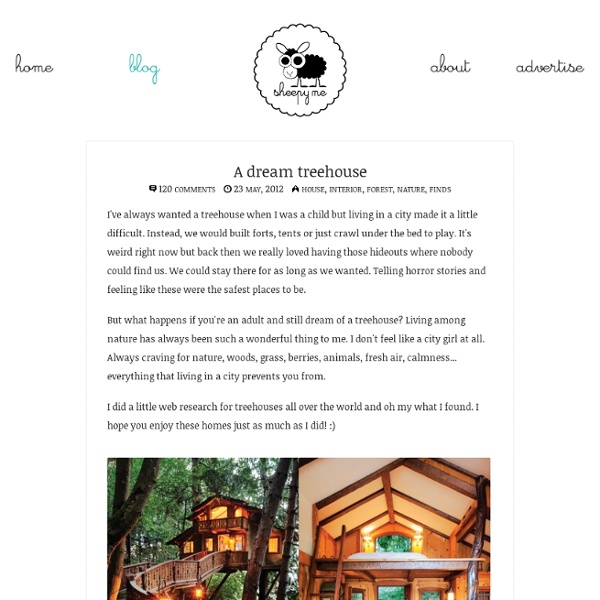 I've always wanted a treehouse when I was a child but living in a city made it a little difficult. Instead, we would built forts, tents or just crawl under the bed to play. It's weird right now but back then we really loved having those hideouts where nobody could find us. We could stay there for as long as we wanted. Telling horror stories and feeling like these were the safest places to be. But what happens if you're an adult and still dream of a treehouse? I did a little web research for treehouses all over the world and oh my what I found. Safe Arbor in Switzerland. Trillium. The enchanted forest. A modern, pitched roof treehouse. A treehouse morning. A dream treehouse. Those are just a few of many treehouses.

National Geographic photographer’s unbelievable encounter with vicious predator in Antarctica (VIDEO) by Dan Havlik posted Thursday, January 31, 2013 at 5:29 PM EDT We've posted quite a few amazing underwater photography videos here before but this story might be the most unbelievable yet. In the clip (embedded below), National Geographic photographer Paul Nicklen talks about his encounter with one of Antartica's most vicious predators, the Leopard Seal. On assignment in the antarctic to photograph the Leopard Seal in its native environment, Nicklen spots a behemoth Leopard seal, which his guide says is the biggest he's ever seen. "Time to get in the water, ya," Nicklen's guide tells him.

50 of the World’s Best Breakfasts from Around the World – Written by Victoria Philpott Not quite had your fill of breakfasts just yet? Check out our beautifully visual list of the 30 best breakfasts from around the world. How To… Embed This Infographic <a href= ‎"><img src=" title="10 How Tos" alt="How To Infographic" border="0" class="nopin" /></a><br />Source: <a href=' title='Interesting Facts'><a href=' title='Interesting Facts'>Today I Found Out</a></a> 1) How to drastically increase the life of your shaving razor

100 Things Personality Test - VisualDNA VisualDNA brings a new layer of information to the world of technology that will help bring it closer to the people who use it – making it more enjoyable and relevant. Technology provides businesses with a surfeit of DATA – what and when. However it provides very little in the way of UNDERSTANDING – who did things, and why they did them. We see this effect in all areas of business from marketing to financial services. Despite all the targeting and site metrics, digital marketing isn’t getting any more effective. And despite all the data gathering there’s a limit to what credit histories can tell financial services about customers and potential customers. English Pronunciation If you can pronounce correctly every word in this poem, you will be speaking English better than 90% of the native English speakers in the world. After trying the verses, a Frenchman said he’d prefer six months of hard labour to reading six lines aloud. Dearest creature in creation, Study English pronunciation. I will teach you in my verse Sounds like corpse, corps, horse, and worse.

One can dream Once upon a time there were some very well-off folks in Vancouver who wanted big new homes. They called upon a builder by the name of Keystone Projects Ltd. and asked them to build the homes of their dreams. They asked for fancy kitchens and bathrooms and rooms for their pool tables and views to die for and a car lover's garage. And POOF!