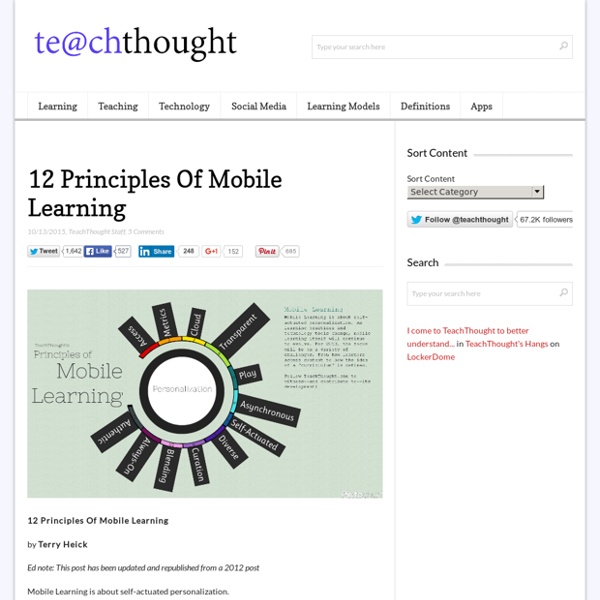 12 Principles Of Mobile Learning by Terry Heick Ed note: This post has been updated and republished from a 2012 post Mobile Learning is about self-actuated personalization. As learning practices and technology tools change, mobile learning itself will continue to evolve. For 2016, the focus is on a variety of challenges, from how learners access content to how the idea of a “curriculum” is defined. It is only within these communities that the native context of each learner can be fully understood. 1. A mobile learning environment is about access to content, peers, experts, portfolio artifacts, credible sources, and previous thinking on relevant topics. 2. As mobile learning is a blend of the digital and physical, diverse metrics (i.e., measures) of understanding and “performance of knowledge” will be available. 3. The cloud is the enabler of “smart” mobility. 4. Transparency is the natural byproduct of connectivity, mobility, and collaboration. 5. 6. 7. 8. With mobility comes diversity. 9.

How Teachers Make Cell Phones Work in the Classroom A.P. Chemistry students use their cell phones to answer their teacher's question. When we talk about using cell phones in class, we’re not just talking about using cell phones in class. Lighting Setups From Scott Kelby's Light It, Shoot It, Retouch It Seminar Scott Kelby is on tour with his Light It, Shoot It, Retouch It seminar. I was able to attend a hands-on workshop, and then hit the seminar the following Friday when it came to Orlando. He mentioned to me before the seminar that it was going to be a lot of deja vu for me, and he was right. However, it was still very informative to see it the second time around because my head was in a bit of a different place for a seminar vs. a hands-on workshop. Have you ever gone through some training and got home, only to discover there was something you didn’t quite catch?

Freedom on the Net 2012 This report is the third in a series of comprehensive studies of internet freedom around the globe and covers developments in 47 countries that occurred between January 2011 and May 2012. Over 50 researchers, nearly all based in the countries they analyzed, contributed to the project by researching laws and practices relevant to the internet, testing the accessibility of select websites, and interviewing a wide range of sources. This year's findings indicate that restrictions on internet freedom in many countries have continued to grow, though the methods of control are slowly evolving, becoming more sophisticated and less visible. Brutal attacks against bloggers, politically motivated surveillance, proactive manipulation of web content, and restrictive laws regulating speech online are among the diverse threats to internet freedom emerging over the past two years. Release Materials for Freedom on the Net 2012:

Microlearning: Strategy, Examples & Applications Think about where you get most of your facts and food for thought nowadays. More likely than not, it’s not from the latest novel you’re reading, or long form article you’ve read, but something short and snappy you saw on your Facebook feed, Tumblr, or other social media channel. This is microlearning (and yes it means that the information you read on Twitter can be considered learning!) – bites of information – but we’ll explain more in a moment. You’re here because you care about learning, especially as it relates to the professional realm.

3 Reasons To Start Using Phones In Your Class It used to be that the sight of a phone in class, not even mentioning an annoying ringtone (!), was against the rules. Fighting the phone became a constant battle. Then one day I decided to stop fighting and embrace the phone. NASA: Earth Observatory Temperature 20°C to 25°C, must remain warm and frost-free Precipitation 2,000 to 10,000 millimeters of rain per year Document Scanning Software - Xerox Scan to PC Desktop Nuance and Xerox have developed Xerox Scan to PC Desktop to bridge the gap between your MFP, paper, Microsoft Office, and PDFs. Scan to PC Desktop brings valuable new cloud connectors and mobile support with synchronization across cloud and mobile applications, including Microsoft Live SkyDrive, GoogleDocs, and Box.net. Your mobile devices are now as connected as your desktop. Why Choose Xerox? Save time at the Xerox MFP with personalized scanning.

eLanguages.ac.uk - digital literacies toolkit Welcome to the Digital Literacies Toolkit. This interactive learning tool was designed by Julie Watson and developed by eLanguages in Modern Languages at the University of Southampton with support from the university Student-Centredness Fund. The purpose of this set of learning resources is to help students: explore the educational uses of Web 2.0 tools and services;familiarise themselves with a range of useful applications for study-related purposes;highlight good practice in the use of social software and the internet, in general. 6 things to consider when creating tablet compatible courses - eFront Blog One of the greatest advantages of e-learning compared to classroom based learning is its convenience. Students can participate in a course at the time and place that best works for them. Mobile learning expands on that convenience, freeing the learners from even having to be at a desk using a computer. With mobile learning, a tablet, (or even a capable smartphone) is all your users need, and classes can be had anywhere those can go, which is, literally, everywhere. There’s only one caveat: any old e-learning course wont do in this fancy new mobile e-learning world. Content has to be designed appropriately in order to be viewed and manipulated in a tablet.

Infographic Provides an Inside Look at the Modern Student December 11, 2012 By: Mary Bart in EdTech News and Trends The Learning Life: An Inside Look at the Habits of the Modern Student was created by StudyBlue, a leading mobile study tool with more than 2 million users. The data comes from a survey issued November 26-30 to the company’s users aged 15-22 attending high schools and colleges across the country. Some highlights to note: Educational Technology and Mobile Learning: Easily Convert Images to PDFs with This Handy Tool May 21, 2016Image to PDF Converter is a wonderful tool from Smallpdf that you can use to easily convert images to beautiful PDFs. The tool is free and simple to use. It also supports major popular image formats including JPG, Gif, Bmp, PNG and tiff files. We have tried it different with different image files and it did a great job. To start converting your images, you simply drag and drop them into the box in the middle of the page, try out some settings then click on ‘Download file now’. You can also choose to save your PDF to Dropbox or Google Drive.